Photo by Jack Gorman
George Strait was the big hit this year. Who sounds good for 2020 RodeoHouston?

How to top the record-breaking year the Houston Livestock Show and Rodeo had in 2019 with its entertainer lineup?

And the crescendo ending boasted performances by George Strait, Lyle Lovett and Robert Earl Keen, who closed out RodeoHouston in front of 80,108 people (paid attendance). It was the largest crowd to ever visit NRG Stadium.

But it's not too soon to think about RodeoHouston 2020.

On the HLSR website, President and CEO Joel Cowley attributed this year's success, in part, to the diverse musical lineup. So continuing in that vein, here's our list of artists who we feel should grace the iconic star-shaped stage next year.

Clint Black in 2016
Photo by Kevin Mazur/Courtesy of PFA Media
For fans of the '90s era of country music, Clint Black would be a good choice. Black, who hasn't played the HLSR since 2009, released his 12th studio album On Purpose in 2015, and while it might not be as celebrated as his previous work, it showcased a twangy, relaxed sound that fit an artist who's totally comfortable in his own skin, no matter what's trending on the charts.

Another one to think about in the up-and-coming contemporary country artist category is Lacy Cavalier. The Louisiana native and former Barney kids is relatively new to the scene, but her star has been on the rise since 2016, when her soaring vocals caught the ear of Chase Rice, who invited her on tour with him in 2016 when she was just 19. 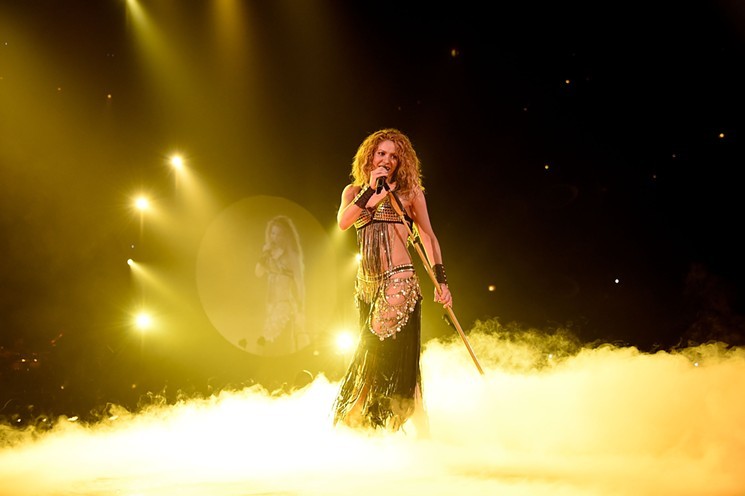 Shakira at Toyota Center in August 2018
Photo by Kevin Mazur/Getty Images for Live Nation
Prince Royce, Camila Cabello, Santana, Cardi B and Los Tigres Del Norte brought a lot of Latin flavor to the 2019 season, and we'd love to see this trend continue. In 2020, RodeoHouston should try to book Shakira, Marc Anthony and Bad Bunny. Shakira would speak volumes, not only as a Latin icon but as a renowned pop artist whose star has only grown brighter with time. Marc Anthony, similarly, would provide the 2020 lineup with some style and a deep catalog of well-known hits. And Bad Bunny, very much like Cardi B, would appeal to a younger audience and bring in people who might otherwise ignore the HLSR altogether. Yeah, yeah, yeah, yeah.

Drake at Toyota Center in September 2016
Photo by Marco Torres
Drake would be a huge get for RodeoHouston, and Beyonce would be even bigger. Either act would be great for Black Heritage Day, especially since they both have a connection to and love for Houston. Unfortunately, they might break the budget. Perhaps a more likely option will be Travis Scott, whose performance couldn't possibly be any less "family friendly" than Cardi B's.

Ariana Grande at Toyota Center in April 2017
Photo by Eric Sauseda
Even though Ariana Grande performed at RodeoHouston just four years ago, the pop star has never been hotter than she is right now. A year removed from thank u, next, we can only imagine what Ariana will return to the fold with.

Twenty One Pilots at Revention Music Center in October 2015
Photo by Violeta Alvarez
Panic! at the Disco didn't break any records this year, but they drew a respectable 74,738 in paid attendance. Fall Out Boy also did well in 2015. Which is why next year, RodeoHouston should book Twenty One Pilots, the electro-pop rap/rock duo that is signed to the same label as both P!ATD and FOB. Their latest record Trench was their most celebrated album to date, and it would translate well on a large stage.

The Killers at Smart Financial Centre in January 2018
Photo by Clint Hale
The Killers or The Black Keys would bring this year's Kings of Leon crowd back, and then some. The Killers haven't released a truly great album since their debut, but Hot Fuss sounds as good as it did in 2004. And since then, the band has released plenty of noteworthy singles. The Black Keys, meanwhile, are about to release their ninth studio album and if its lead single "Lo/Hi" is any indication, fans are in for yet another bluesy treat.

Dolly Parton at NRG Arena in December 2016
Photos by Jack Gorman
Most importantly, RodeoHouston will need to think carefully about who will open and close the 2020 season. We'd like to humbly suggest Dolly Parton and Shania Twain. Parton hasn't performed at the HLSR since 1978, and Shania's only visit was in 1999. Both leading ladies are renowned matriarchs of country music, and both would surely sell out the venue.
California Privacy Policy California Collection Notice
Do Not Sell My Info
Use of this website constitutes acceptance of our terms of use, our cookies policy, and our privacy policy The Houston Press may earn a portion of sales from products & services purchased through links on our site from our affiliate partners. ©2022 Houston Press, LP. All rights reserved.