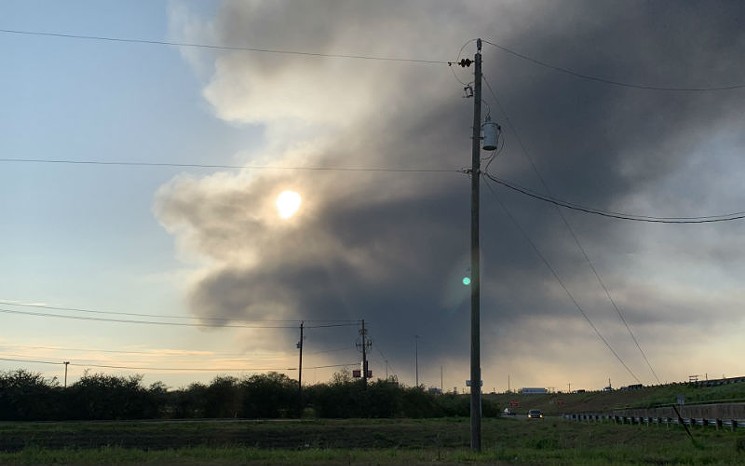 The fires are out but as of Thursday morning, all was still not right at ITC in Deer Park.
Photo by Kate McLean
Update 1:20 p.m. Thursday:

Shifting winds moved some of the foam that was trying to contain emissions from an ITC tank containing benzene last night, which officials believe allowed vapors to escape which resulted in a call to shelter in place, authorities said at an 11 a.m. press conference today.

“As the winds were shifting last night, the foam blanket at the top slid to the side of the tank, causing [emissions.] Now, we are going to pump some of the product out which will allow the foam to stay put,” said Alice Richardson, an ITC spokeswoman. ITC plans to transfer the pygas to another tank within the facility.

“Beginning at 4 a.m. average levels were measured at two to three parts per million resulting in shelter in place. We believe the increased levels may be due to the shifting of foam in one of our tanks,” Richardson said.

The tank in question is 80-7 and was one of the last to catch on fire. Under normal circumstances, a floating roof exists on top of the tank, but since the fire, a raft of foam has replaced the damaged roof, Dale Samuelsen, a spokesman for ITC, explained.

The tank was a little under 40,000 gallons full when the wind shifted, Samuelson said. Since then they have been able to remove a little more than half of those chemicals, transferring them to another tank on the ITC site.

According to a tweet from the City of Deer Park the shelter in place was lifted as of 11:40 a.m. “Air quality readings are improving, and over the last few hours, they have been significantly reduced,” said emergency services director Robert Hemminger. Hours before, the City of Pasadena lifted its shelter in place as well. In addition  Texas 225 between Beltway 8 and Texas 146 was closed in both directions. As of 1:11 p.m. it has reopened.

“We did have a change in the situational awareness over the last 12 hours,” said Adam Adams, federal coordinator for the Environmental Protection Agency. Up until this morning, the EPA had maintained there had been no hazardous detections in the air.

“The EPA continues air monitoring throughout the ground, in mobile units, and in aircraft. No negligible detections have been found and not benzene,” Adams said. Prior to the increased levels in Thursday morning, the EPA had arranged for a Trace Atmospheric Gas Analyzer bus to drive inside Deer Park to continuously monitor the air. “It’s been running and we haven’t had any significant hits at all, “ Adams said.

Adams explained one detection occurred in the community, but that it wasn’t sustained or continuous.

During the shelter in place, residents were told to turn off their air conditioners and stuff towels under doors to ensue that no vapor came into their homes.

“This incident is changing minute by minute, as I was walking out the door people were handing me notes,” said Richardson. ITC reported no serious injuries have occurred.

Original story:
The fires may be out but with levels of benzene on the rise at the ITC facility in Deer Park, it became apparent Thursday morning that this whole chemical accident and its effects are far from over.

As we reported earlier, while the EPA was giving the all-clear, the Texas Commission on Environmental Quality  acknowledged some troubling findings. TCEQ showed an "Unhealthy" air patch at 1 p.m. Wednesday on its AIRNow.gov site. Seven hours later, the same graph showed the patch decreased to "Unhealthy For Sensitive Groups." The ITC directed questions regarding the fluctuation to TCEQ.

"The fire remains extinguished; however, onsite responders are reporting increased levels of benzene. These levels are below those that represent an immediate risk. We have notified the surrounding municipalities and out of an abundance of caution Deer Park Emergency Operations Center has called for shelter in place precautions immediately for all of Deer Park. The Deer Park Police Department has notified us that Highway 225 is being closed from Beltway 8 to Miller Cutoff."


Benzene is a chemical found in gasoline, auto emissions and even cigarette smoke. According to the American Cancer Society, short term effects of benzene include drowsiness, dizziness, headaches, tremors, and confusion/ unconsciousness.

Shell Deer Park which is near to ITC issued this statement:

"Shell Deer Park has detected levels of benzene at our facility on our east fence line and as a result has enacted a shelter in place (approx. 6:55 am) for certain zones within our site.

Shell Deer Park does not currently have an incident. Operations are normal.

Air monitoring is ongoing. When levels return to limits below our standard, we will remove the limited shelter in place."


School districts in Deer Park, La Porte, Channelview, Sheldon and Galena Park remain closed.  Houston ISD issued a statement this morning saying it is keeping its campuses open, adding: "As a precaution, schools in the area near the Deer Park industrial facility will continue to hold all activities indoors. As an extra layer of precaution, HISD will use outside contractors to test the air quality of all the schools near the industrial facility."

"With Houston Independent School District classes in session today, we want to emphasize that Harris County Emergency Management officials are reporting no benzene has been detected outside the established shelter-in-place zone. Out of an abundance of caution, HISD has hired outside contractors to test indoor and outdoor air quality at our campuses in eastern Harris County. HISD is also deploying additional nurses to monitor the well-being of our staff and students." 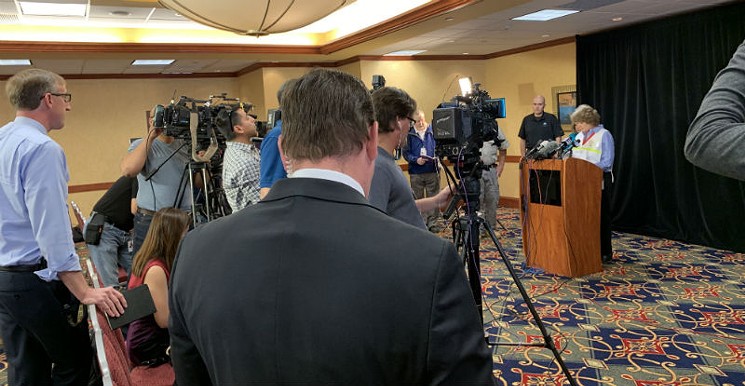 The briefings were moved away from the ITC plant on Thursday to the Marriott on I-45.
Photo by Kate McLean
California Privacy Policy California Collection Notice
Do Not Sell My Info
Use of this website constitutes acceptance of our terms of use, our cookies policy, and our privacy policy The Houston Press may earn a portion of sales from products & services purchased through links on our site from our affiliate partners. ©2022 Houston Press, LP. All rights reserved.