Four Questions As the Astros Begin the 2019 Season 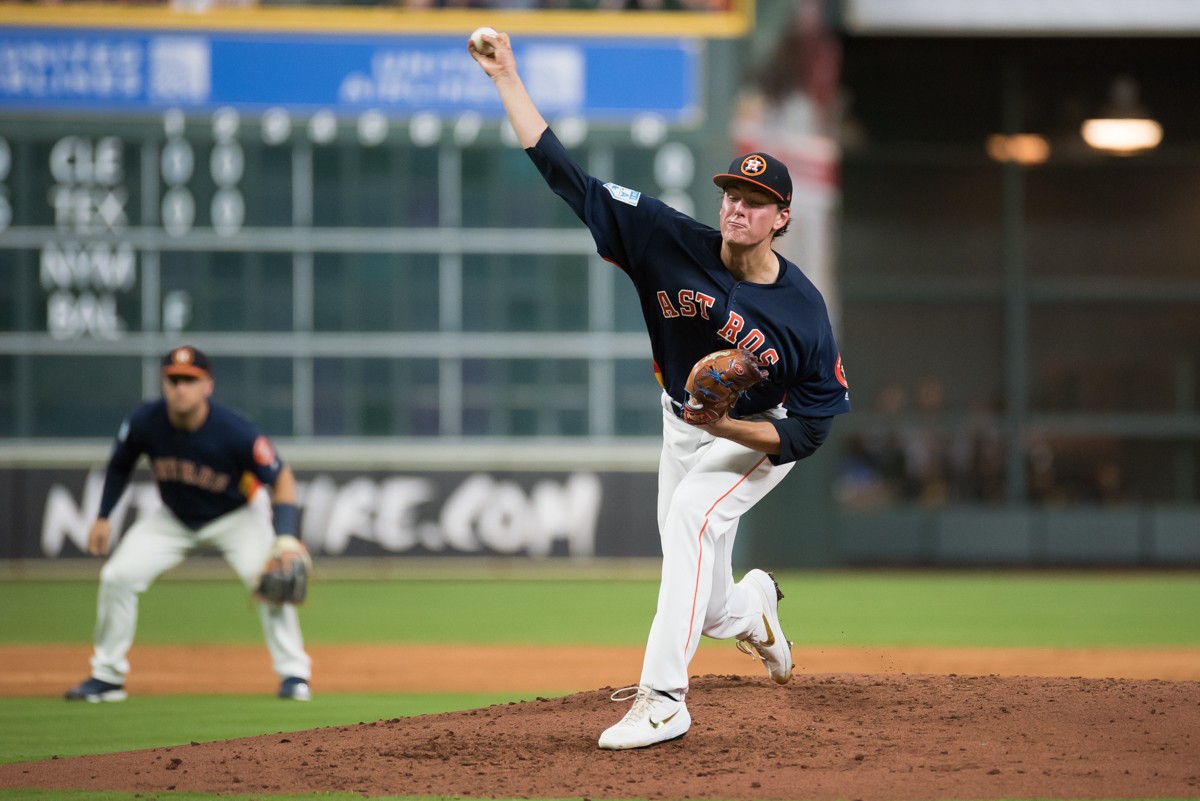 Photo by Jack Gorman
Astros top prospect Forest Whitley could make a move into the starting rotation this season.
The flowers are blooming, the weather is starting to warm up and spring break is in the rearview mirror. It's springtime and that means baseball. The Astros begin their 2019 campaign after a record-setting, yet ultimately unfulfilling 2018. Of course, anything short of another World Series victory would be a disappointment after 2017, but a combination of injuries and a very good Red Sox team combined to shutter a season filled with some remarkable performances.

There is promise anew as is often the case each spring, but this somehow feels different. While the dominant starting pitching might not be quite what it was in 2018, there is optimism that the offense, particularly with additions like Michael Brantley, might rev up to 2017 levels. Plus, with perhaps the best one-two starting pitching punch in baseball and what looks to be a killer bullpen, could we see another World Series in Houston come October?

Will Forest Whitley become part of the rotation this year?

If there is one question mark for this team, it is starting pitching beyond Justin Verlander and Gerrit Cole. Colin McHugh, on the heels of a stalwart year in the pen, has been reinserted in the lineup, with the departures of Dallas Keuchel (though he's still hanging around) and Charlie Morton, plus the injury to Lance McCullers, Jr. The team added veteran Wade Miley, who they think could be this year's Morton-like reclamation project. And Brad Peacock is back at the five spot after a shaky year in relief.

Even if the Astros and Keuchel were reunited (it's possible!), this rotation wouldn't have the depth of 2018. Enter Forest Whitley, who has been quite good in spring training (minus a rough start in his last outing). He is the Astros No. 1 prospect and it seems almost a foregone conclusion he'll join the big club at some point during the season. If he does and if he performs, he could certainly help not just in 2019, but with the team's needs for pitching in 2020. Expect to see him in an Astros uni by July or August

For what feels like years now, Carlos Correa was going to have a breakout season, a year when he hit around .300, jacked 30-plus homers and drove in well over 100 runs. And in each season, that hasn't really happened, often derailed by injury. In 2018, it was a bad back that pushed Correa onto the DL and ultimately resulted in a subpar season for the talented young shortstop. And this isn't to say he hasn't already been dangerous, but just not quite what fans and baseball pundits have expected.

The good news is that there is no reason Correa shouldn't eventually reach the pinnacle of play that his talent suggests. He has been stellar in spring training and any lingering effects of the back injury from last year seem to be long gone. With the addition of the lefty Brantley, it's likely that Correa will spend most days in the five spot in the lineup, affording him a chance to avoid some of the pressure of the cleanup, but, if he is any kind of competitor, making him want to prove he should be in the four spot regardless of which side of the plate he hits from. All signs point to a big year from Correa and the Astros will need his bat.

Who will ultimately be the closer?

The controversial trade that brought Roberto Osuna to the Astros last year overshadowed the more impactful move to acquire Ryan Pressly from the Twins. Pressly was the Astros best reliever for the remainder of the 2019 season with a microscopic .77 ERA in 23.1 innings pitched and 32 strikeouts to only three walks. He was about as good as it got and as reliable a reliever as the Astros have had in the last few years. The result was a two-year, $17 million contract extension.

Osuna is clearly the more dynamic player with the kind of game built for the closer role. He's also much younger than Pressly, making him a potential long-time closing prospect for the 'Stros. In truth, the Pressly-Osuna one-two closing punch could, if fully realized, look a lot like the Verlander-Cole starting pitching rotation. Ultimately, this will be won and lost by Osuna. Pressly can handle long relief, middle, setup or closing. Osuna seems built for the closer role, so, for now, it will be his to lose. But this is a battle that will be worth watching and the better the battle, the better the Astros' back of the bullpen.

Will the Astros make it back to the World Series?

Repeating is difficult. It's damn near impossible. Very few teams have done it and the Astros were, like so many others before them, not among them. But it would not be a shock to see them back there in 2019. The Astros are one of the favorites in baseball again with a difficult-to-face lineup one through nine, what looks to be, again, one of the best bullpens in the game, and two starting pitchers who would be the ace on most staffs in the league. It stands to reason they will have a legitimate shot to get back to the World Series.

Still, it is a very long season. In the AL, teams like the Red Sox, Yankees and some surprises we haven't even thought of at this point, will challenge. While the AL West might not be a murderer's row of opponents, there will be plenty of difficulties for the Astros. Then there are injuries, the great equalizer in all of sports. The Astros have been mostly fortunate when it comes to staying healthy with a few notable exceptions. The healthier they remain, the more the odds grow in their favor. Fortunately, they do have quite a bit of depth and plenty of young talent in the minors. Not making the Series would be a disappointment, so don't be surprised if they are hoisting another trophy come October.
California Privacy Policy California Collection Notice
Do Not Sell My Info
Use of this website constitutes acceptance of our terms of use, our cookies policy, and our privacy policy The Houston Press may earn a portion of sales from products & services purchased through links on our site from our affiliate partners. ©2022 Houston Press, LP. All rights reserved.