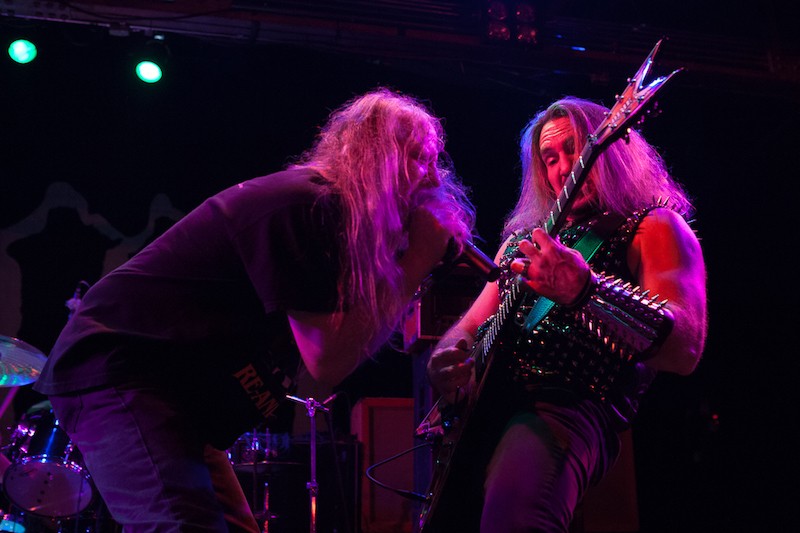 Texas metal lost an iconic voice earlier this year when Bruce Corbitt, vocalist for Dallas/Fort Worth thrashers Rigor Mortis and later Warbeast, passed away following a two-year battle with esophageal cancer. In a big state whose disparate, urban metal scenes can often feel like remote islands with little contact with one another, Corbitt was known far and wide, been an active, enthusiastic participant and performer since the ‘80s.

With the obvious exception of the members of Pantera, no North Texas headbanger ever enjoyed as high a profile in Houston as he did, and this Saturday his H-Town admirers will raise the horns high in salute to his life and legacy at Rudyard’s British Pub for You Know Damn Well: A Benefit for the Family of Bruce Corbitt.

The benefit, headlined by James Rivera’s Metal Asylum, will offer a diverse bill of some of Houston’s best heavy acts—half of whom are only rarely seen onstage here. The show is the brainchild of Sanctus Bellum bassist Ben Yaker, one of Corbitt’s many friends and admirers in the Texas metal tribe.

“I intended or hoped to do (a benefit) shortly after Bruce’s initial diagnosis back in 2017, but life kind of got in the way,” Yaker says. “I started thinking about it again after I went to the benefit shows they had at Rudz for (late former Rudyard’s booking agent and general manager) Stacy Hartoon. after a year and a half of just an epic battle with cancer, I wanted to do something just to put a little dent in it and maybe help his family out, whatever we can do for him.”

Sanctus Bellum shared the stage with Corbitt and his band Warbeast a few times over the years. In many ways, the singer was a gateway for Yaker and others from the Houston scene into the wider world of Texas metal.

“He was the voice of Texas thrash, in my view,” the bassist says. “I didn’t grow up in Texas; I grew up on the East Coast. I didn’t have, growing up, a real sense of what the scene—especially in Dallas and Fort Worth—was. I came across it later.

“People told me that Bruce was the lead singer from Rigor Mortis, and I didn’t even know Rigor Mortis was from Texas—I really knew that little,” he continues. “It was kind of my introduction into this Dallas/Fort Worth thrash scene. I realized it was really kind of instrumental in thrash in general and the impact that it had, and ‘Oh, this is where it’s all coming from.’”

Corbitt first found acclaim as the singer of Rigor Mortis in the mid-‘80s. Their self-titled debut for Capitol Records in 1988 established him as an influential voice in the ever-growing metal underground, defined by his monstrous, throaty croak and horror-move-obsessed lyrics. He parted ways with Rigor Mortis not long after the record came out, and the band broke up in 1991.

For more than a decade to follow, Corbitt was sidelined from the stage, but he never really went away, turning up at local shows and generally supporting his friends in the scene. Beginning in 2005, he began performing again with a reunited Rigor Mortis and formed the band Warbeast with former members of fellow DFW thrash legends Gammacide. They put out several well-received albums and toured with the likes of Down and GWAR, helping to cement the singer’s legacy—especially in his hometown.

“They loved him in Dallas,” Yaker says. “Everybody had known those guys forever, and they’d known everybody in the crowd forever. When they played, it was just a lot of fan interaction, Bruce saying hello to this guy, that guy and the other guy in the crowd as he’d spot ‘em.”


Despite the love, Corbitt’s life was far from charmed. Before the he-said, she-said split with Rigor Mortis, he survived being stabbed in the back multiple times at a riotous show in 1987. He later helped reform the band following many years apart but Rigor Mortis/Ministry guitarist Mike Scaccia collapsed onstage and died at the Rail Club in Fort Worth during a performance celebrating Corbitt’s 50th birthday in 2012.

The singer soldiered on successfully with Warbeast, but he developed a heart condition called coronary artery disease that nearly killed him in 2017. After recovering enough to triumphantly return to the stage, he received the cancer diagnosis later that year. Corbitt broadcast his fight via regular social media updates throughout, but fans could only desperately encourage him to keep battling as they watched him slowly succumb to his illness.

When Yaker and company take the stage on Saturday, however, they won’t remember Corbitt’s struggles. They’ll remember the Texas metal titan they saw stalking the stage with his trademark chain-link mike stand—as well as the man many of them came to know away from the lights.

“He could project this giant personal on stage; he was really one of the best I’ve ever seen,” Yaker says. “There are certain front men you watch who just have absolute command of what’s going on onstage; he was one of them. And then you talk to him offstage, and it’s ‘Oh, I wish I could have done this differently, or that,’ just like anybody else. He was very kind and down to earth.”

Yaker and Sanctus Bellum don’t perform together too often these days; band members are busy with other musical projects like Blues Funeral and Mr. Plow as well as pursuing interests. They won’t be the other seldom-seen act of the night on Saturday, however. Mastema, one of Houston’s best-ever thrash bands, will take the stage after years of inactivity, and Helstar frontman James Rivera will bring his San Antonio-based group Metal Asylum to Houston to play selections from his long career. They’ll be supported by local scene stalwarts the Scourge, Scrollkeeper, and Fiddle Witch and the Demons of Doom.

There will also be a raffle and silent auction of various signed posters and drum heads, original artwork, and even selections from Corbitt’s own extensive collection of band shirts and memorabilia. Cancer treatments and funerals aren’t cheap, so donate as much as you can. Most of all, have a good time and rock the fuck out—nothing could make Bruce Corbitt happier.

Rudyard’s British Pub hosts You Know Damn Well: A Benefit for the Family of Bruce Corbitt on Saturday, March 30 at 2010 Waugh. Doors open at 6 p.m.  $15.
California Privacy Policy California Collection Notice
Do Not Sell My Info
Use of this website constitutes acceptance of our terms of use, our cookies policy, and our privacy policy The Houston Press may earn a portion of sales from products & services purchased through links on our site from our affiliate partners. ©2022 Houston Press, LP. All rights reserved.