Why Don't We Are The Champions At Smart Financial Centre

My life fades. The vision dims. All that remains are memories. I remember a time of choreographed dance routines, five-part harmonies. But most of all, I remember the boy bands. To understand where they came from we have to go back to the other time, when the world was powered by extended plays and the desert sprouted great multi-purpose arenas.

I’d never been to a boy band concert, though I’m plenty familiar with the concept. I was eyewitness to the Backstreet/N’Sync Wars of the 1990s, after all, and lost my own sister to a New Kids incursion. Still, nothing prepares you for the actual event. Like true love or a hydrogen bomb blast, it’s something you really have to experience in person.

It's also something that renders conventional means of reviewing shows nearly useless. Sure, we who endeavor to convey our experiences watching musical performances like to take into account musicality, pitch, song variety, and overall entertainment value, but these factors are hard to gauge when 6,000 tweens are doing their best to shatter every wine glass in a three-mile radius.

Why Don’t We is not only the latest in a long line of musical youngbloods who have besieged us since the Bay City Rollers “Shang-A-Langed” their way onto our shores, they’ve distilled the purest essence of their forebears into a musical combination as potentially lethal as it is infectious. And after listening to the Smart Financial Centre crowd’s reaction to their "8 Letters" show last night, the contagion has almost spread beyond containment.

Opening with their biggest hit to date, the Ed Sheeran-penned “Trust Fund Baby,” the fivesome — consisting of Jonah Marais (“Mr. Sensitive”), Corbyn Besson (“Godzuki”), Zach Herron (“The McCartney”), Daniel Seavey (“Joey Tribbiani, Jr”) , and Jack Avery ("Haircut 100") — easily seized control of the crowd. Compared to others of their ilk, the stage was minimalist: five platforms for the singers and a video screen to offer various visual accompaniments (undersea vistas for "In Too Deep," digitized versions of themselves on the phone during "Talk"). 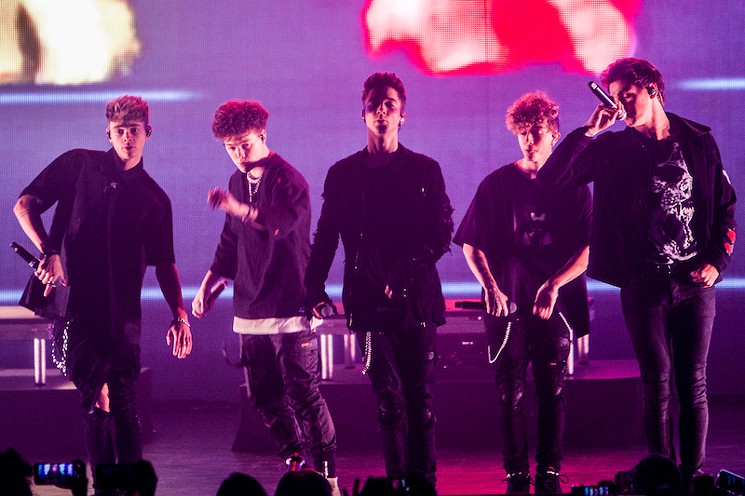 Get that kid on the left some intact pants.
Photo by Greg Gabrisch
Unlike their '90s ancestors, WDW aren't much for fancy dancin'. They slid and slunk across the floor in coordinated fashion, sure, but there was little in the way of elaborate choreography. Frankly, when the simple act of strolling to the front of the stage draws ear-splitting shrieks, why risk an ACL tear?

And it isn’t really fair to give the band a hard time for the crowd's reactions. Screaming at concerts is more or less instinctive for teens at this point, and likely would’ve taken place if WDW had merely pouted under mood lighting for 75 minutes. But their harmonies were tight and they transitioned smoothly from pop to R&B(ish) to hip hop (the mid-set mash-up featured Post Malone's "Better Now,” among others).

Then again, it was kind of fun to note exactly what was eliciting the screams in question. Going by my own hazy recollection, the loudest were in response to references to Houston, prom, and the skinny one Corbyn saying his pants were falling down.

Why Don't We's career trajectory is as steep as it is brief. Since announcing their very existence in 2016, they've gone from playing malls to arenas, and their fans — for now — are happy to tag along. The two oldest members are only 20, so they hopefully have a couple more years before vanity projects and celebrity romances spell their doom. Judging by last night's show, their fame still has plenty of room to grow.

What About the Openers? Lots of respect to opening acts who have to perform in front of a big white curtain. Brynn Elliott played guitar and keyboards and was very engaging. EBEN was enthusiastic, but there were weirdly long stretches where he held his mike aloft while (I guess) the backing track was still singing? Milli Vanilli has ruined me.

Personal Bias: I'm old enough to appreciate the fact EBEN and Jack Avery are trying to bring camouflage pants back.

Overheard In The Crowd: "Their last Houston gig was at House of Blues. That place sucks."

Random Notebook Dump: “My ears! Ze plugs do nothing!”

SET LIST
Trust Fund Baby
M.I.A.
Choose
Hard
Friends
In Too Deep
Nobody Gotta Know
I Depend on You
Runner
Why Don't We Just
Something Different
[Mashup]
Taking You
These Girls
Hooked
Talk
8 Letters
Big Plans
Cold in LA
I Don't Belong in This Club
California Privacy Policy California Collection Notice
Do Not Sell My Info
Use of this website constitutes acceptance of our terms of use, our cookies policy, and our privacy policy The Houston Press may earn a portion of sales from products & services purchased through links on our site from our affiliate partners. ©2022 Houston Press, LP. All rights reserved.