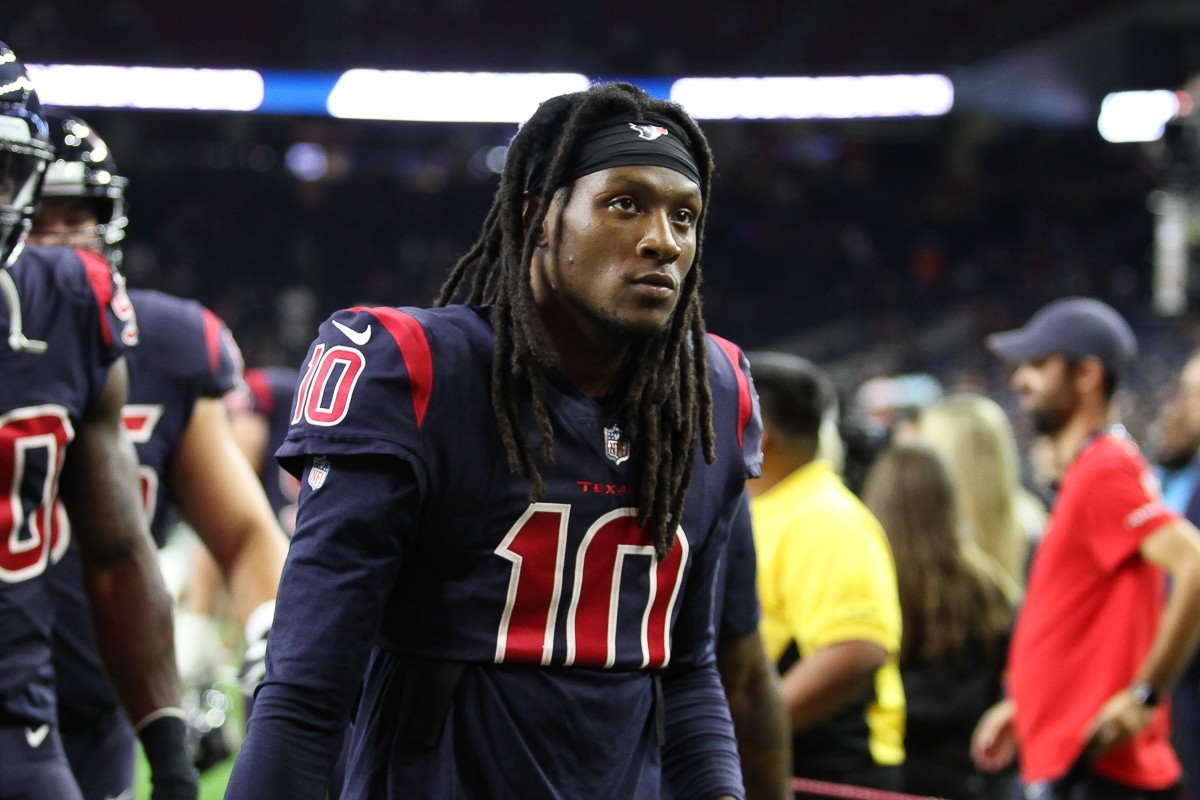 Photo by Eric Sauseda
DeAndre Hopkins is an example of a great foundational draft pick by the Houston Texans.
The lead into Brian Gaine's press conference last week gave us the first glimpse into the stated goals of the draft coming up this Thursday:


As we reported Monday, "four picks in the top 86" was repeated on multiple occasions throughout the press conference, a reminder that Gaine is probably excited about the opportunity, but also acutely aware of how crucial hitting on all of these picks is in order to fortify a roster that is quite top heavy, with many holes for a team that won 11 games last season. In short, Deshaun Watson's greatness can only cover up so much.

To me, hitting on all four of those picks would mean finding a couple foundational pieces (i.e. players you could see the Texans signing to a second contract) and a couple guys who contribute during their four year rookie deals, and then maybe they stay or maybe they leave for more money in free agency. You can't re-sign everybody.

The foundational pieces, though, are the big key. Right now, I would say the Texans' foundational players, players either on their long-term deals or approaching them after their rookie deals are up, are Deshaun Watson, DeAndre Hopkins, J.J. Watt, Jadeveon Clowney (someday), and Bernardrick McKinney, for sure. Will Fuller, D.J. Reader, and Justin Reid are all guys I feel could find their way onto that list. After that, not much there.

So what can we learn from the Texans' history in finding "foundational" players, or anything close to that? Well, the good news is that, since the Texans have only been around since 2002, examining the entire franchise's history is pretty easy. Listed below are the top 25 Texans of all-time, according to Pro Football Reference's Approximate Value metric. I think it's safe to call all of these players either "foundational" or ATTEMPTS at finding something "foundational." Let's take a look:

The breakdown of these 25 players' acquisition methods are as follows:

The Texans cannot afford to screw up the first round
Putting David Carr aside, because to think he is the 13th most valuable Texans is to completely recalibrate the definition of the word "valuable," nine of the top 20 or so players in franchise history were first round picks of the Texans, including all of the first rounders taken from 2008 through 2014. The Texans have no choice but to find a "ten year long" Texan with their first round pick. If trading some middle round draft capital to move up and improve the hit rate is something Gaine feels necessary, to move up and get an Andre Dillard, than I'm cool with that.

The Texans missing out on deeper playoff runs in 2011 and 2012 really hurts
Aside from DeanDre Hopkins at number 9 Chester Pitts at number 10, the other nine players in the Texans' top 11 of all time were all core pieces on the 2011 and 2012 playoff teams, and three of the next four players were on the team in one of those two seasons. That was a really nice core nucleus that was, unfortunately, not really built to last, or certainly not built to overcome a completely pick six prone quarterback, as we found out in 2013.

Charley Casserly's final act was clearly his best
The 2006 draft class doesn't have any players in the Texans' all-time top 11 players, however it does have four of the players listed in between number 12 and number 17 — Winston, DeMeco Ryans, Mario Williams, and Owen Daniels. While none of those four went on to become super elite players as a Texan (all due respect to Williams, but Ryans was probably the closest, until he suffered a torn Achilles), it was a solid class with lots of pieces that would fit nicely on a roster like the Texans' current roster.