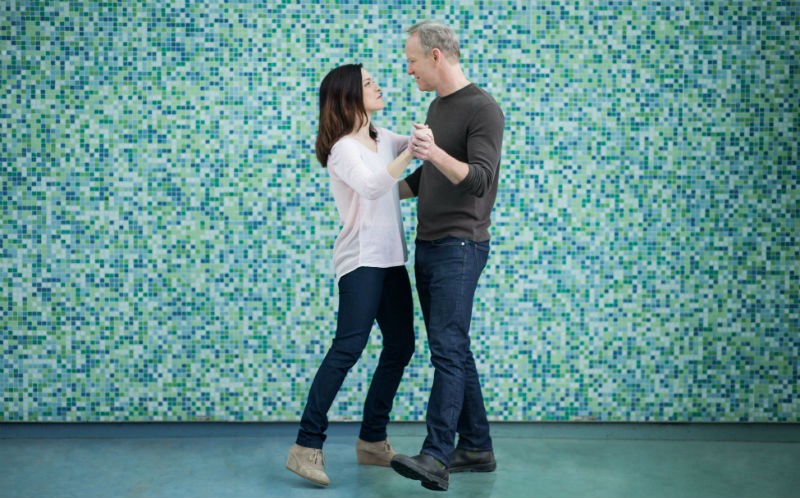 Photo by Alyson Huntsman
Elizabeth Bunch and Chris Hutchison in Constellations at the Alley Theatre.
Marianne and Roland meet. They meet again. And again. In Constellations, a 70-minute, one-act with 52 scenes and zero furniture on the set , Elizabeth Bunch and Chris Hutchinson will experience one encounter after another — often with different outcomes — as two people negotiate romance amid a backdrop of quantum physics.

Despite having worked together previously and despite each of their several years as members of the Alley's Resident Acting Company, this will be the first time that Bunch and Hutchison, married in real life, star together in a two-person play.

Hutchison plays Roland, a beekeeper, Bunch plays Marianne, a Cambridge scientist concerned with the cosmos and all the questions it raises about more than one universe and a time line that — as Einstein believed — is far from linear.

Alley Interim Artistic Director James Black suggested Constellations to them. "It's a two-hander. That was on my list of things that I really wanted to do. To get an opportunity to get out on stage with one other person carrying all that weight was exciting to me," Hutchison says. "And then once you read this play you feel you have to do it. It's a beautiful play. It's wonderfully crafted but it also demands a level of facility from the actors that is really exciting."

Bunch says she wanted to do it because "I love when a relationship play or a play that focuses on human emotion and love is based in something bigger than the  two people. The melding of a scientific idea and a theory and fitting love and relationship inside of that gives a typical married couple relationship so much more interest. It creates a puzzle instead of your typical rom-com."

Hutchison describes Roland as: "Salt of the earth. Kind, a good partner. It's interesting because you see some of these scenes played out in several different ways and not every version of the character is as admirable as the description I've just provided," he says with a smile. "And it's fun because those few places where the story detours a little bit and I get to play kind of a cad or a jerk , but mostly the character as we get to know through the spine of this play as the pieces come together is really a kind, decent, caring, loving very human flawed guy."

Bunch says Marianne is a person who seems to get in her own way. "She 's this wonderful meld of when you meet those people in life whose brains are so big, they're having such complex thoughts that they're almost tripping over themselves to be the normal, day-to-day version of a humanoid.

"She wants to be a joker. and she wants to be casual, but she's got that awesome social awkwardness. It's that thing that we all try to disguise about ourselves on a day-to-day basis.," Bunch says. But not Marianne. She comes right out with her insecurities. "But she's a good partner as well. They're a wonderful match for each other."

"Sometimes you'll see the same scene again and it's just a hair different so we as actors get to enjoy exploring that, how to draw out that slightly different shade of intention or meaning in those variations," Hutchison says.

As the play, directed by Leslie Swackhamer progresses, the number of options the couple has in their relationship narrows, both say. "As you get toward the end of the play, this is a couple that has made it so far. This is a version of Marianne and Roland who have stayed together through so much," Bunch says. "So they may have a fight or say the wrong thing, but they come back together. Whereas early in the relationship if there's a fight or they say the wrong thing, it's much easier to call it quits and they're not going to stay together. So they deepen as you're watching the show."

And now, just for fun, Elizabeth Bunch and Chris Hutchison as the mother and father in the Cratchit family in A Christmas Carol at the Alley in 2016. The young man on Hutchison's knee playing Tiny Tim is one of their two sons in real life. 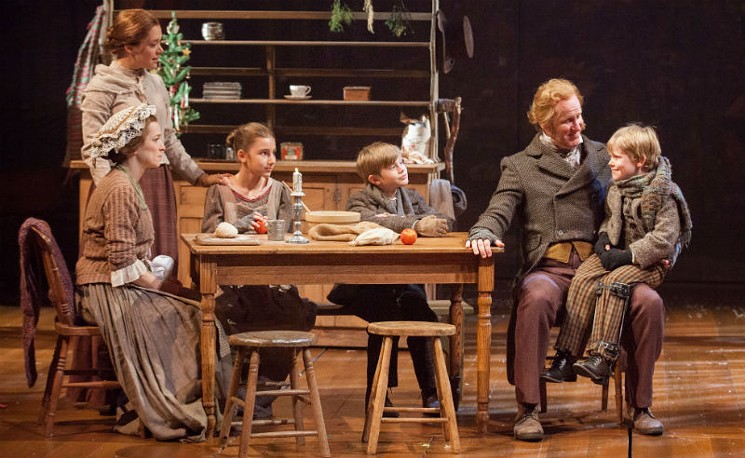 Bunch and Hutchison appeared in A Christmas Carol at the Alley in 2016 with their son as Tiny Tim.
Photo by John Everett
California Privacy Policy California Collection Notice
Do Not Sell My Info
Use of this website constitutes acceptance of our terms of use, our cookies policy, and our privacy policy The Houston Press may earn a portion of sales from products & services purchased through links on our site from our affiliate partners. ©2022 Houston Press, LP. All rights reserved.