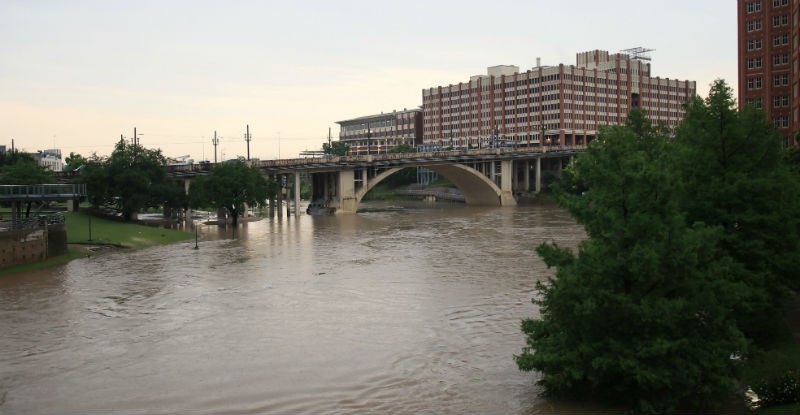 The good news: the worst of it is over. The bad news: it's still going to be a soggy weekend, part of it anyway.

As we mentioned, rainfall totals ranged mostly 2 to 5 inches with a few spots at around 7 inches, particularly in northwest Houston. Despite the heavy rains, spotty hail and tremendous lightning (what a light show!), there was no reported home flooding of significance as there was Tuesday night when some 400 homes had water in them. Mostly, we dealt with street flooding and some just over full bayous, which will begin to recede today.

There, of course, will remain flooding issues along the Trinity and Brazos Rivers, both from heavy rain in the area and upstream rainfall that has yet to reach southeast Texas, but that should also begin to subside this weekend.

Thursday night was likely the worst of the rain we will see for a while. Forecasts are calling for very little rain during the day Friday with perhaps some additional rain showing up overnight into Saturday. On Saturday, there should be an abundance of rain throughout the region, but significantly less intense than Thursday night. Expect rainfall totals of 1 to 3 inches with perhaps an isolated spot with a bit more. There could be some more severe weather as the front that is currently moving south out of north Texas passes through, but once that moves off the coast, skies should begin to clear and it appears we could have a lovely, even slightly cool, Mother's Day.

Heavy storms including some hail moved in late Thursday with street flooding occurring almost immediately because of the already saturated ground. By Friday morning more closures were announced, among them Houston Community College, University of Houston Downtown and most area school districts including Houston ISD.

HCC announced it would continue to be closed Friday and throughout the weekend and postponed finals scheduled during that time . UHD through Saturday. A flash flood warning had remained in effect until 4:30 a.m. Friday in Houston and residents were asked by city and county officials not to travel during that time.

This morning TranStar was showing high water at a number of locations in Harris, Fort Bend and Brazoria County, chiefly at points along I-45, 610, i-69, parts of Highway 6 and U.S. 90.

According to Space City Weather this morning, most areas got 2 to 5 inches with some spots receiving as much as 7 inches of rain. A number of bayous were at bankfull or almost out of their banks. Conditions were expected to improve during the day.

After a wild round of thunderstorms Tuesday, Wednesday and much of the day Thursday were quiet with only small pockets of light rain falling around the region. It is expected that heavy rain and thunderstorms will begin filtering into the Houston area late this afternoon and early into the evening with plenty of rain overnight and into the early morning hours.

The entire region is forecast to receive between 5 and 8 inches of rain between Thursday night and Sunday morning with some areas certain to receive perhaps double that amount, which is why the National Weather Service issued a Flash Flood Watch Thursday afternoon that runs until 7 p.m. Saturday night.

In anticipation of this, Houston Community College commencement and graduation ceremonies originally scheduled for this Saturday have been rescheduled for Friday, May 17 at NRG Stadium. Updates will be posted throughout the week.

The AsiaFest scheduled for this Saturday has been re-scheduled for June 29-30 because of the flood risk this weekend it was announced today. The sold-out Anita Baker concert scheduled for Friday night at Smart Financial Centre in Sugar Land has been cancelled. Certain portions of Sugar Land were heavily flooded during the Tuesday rains.

It's like deja vu all over again at the Sabine Bridge.
Photo by Doogie Roux
In an afternoon joint press conference between the city of Houston and Harris County, County Judge Lina Hidalgo urged people to go straight home this evening. TranStar tweeted out a prediction that there could be local heavy rainfall and flooding and urged travelers to check its traffic map. The Houston ISD, however, appeared to be going ahead with its monthly public board meeting scheduled to start at 5 p.m. today. Update: 5:05 p.m. Board President Diana Davila announced that because of the threat of severe weather they would be continuing with tonight's meeting, but only cover certain agenda items.

Our atmosphere is super charged with moisture and there are a pair of frontal boundaries to our north that are sagging their way into the area drawing water off the Gulf of Mexico. Additionally, there is a small disturbance to the southwest moving up the coast line that should converge in the area later tonight. That combination should produce fairly explosive results tonight and into tomorrow morning.

Both the Trinity and Brazos Rivers are already swollen though area bayous have mostly receded since Tuesday. The biggest threat is river flooding and flash flooding int areas hardest hit by the rain. Just because you didn't get flooded during Harvey doesn't mean a flash flood couldn't create issues for you over the next couple days, so be prepared.

The big question is where will the worst occur and, unfortunately, with a region as large as ours, that is nearly impossible to predict. The latest weather models would seem to indicate the worst of it will stay close to and south of Interstate 10 on the westernmost portions of the area and south of perhaps the Livingston area to the east. That would seem to put the southwest and northeast portions of the area in the crosshairs, which isn't good news considering all the rain they got Tuesday.

But, that is just a guess at this point. Any slow moving storm system could drop 2 to 3 inches of rain per hour on virtually any spot from Galveston to Huntsville, Columbus to the Texas-Louisiana border. We will update this story as we get new information.

The City of Houston Municipal Courts will close as of 6 p.m. Thursday , resuming with normal business hours on Friday. Persons with court settings Thursday night will have a chance to re-set their cases. If a person doesn't rest their case between May 13-17, an arrest warrant may be issued, the court's announcement said.

Alvin Community College closed for Friday. No decision yet on commencement activities scheduled for Saturday.

All BakerRipley schools and centers are closed Friday.

Harris County Courthouses are OPEN but Harris County Civil, Criminal, Family and Juvenile District Courts’ dockets are cancelled for Friday, May 10, 2019, and litigants set for Friday May 10, 2019 need to contact their individual courts to reschedule.

Jury call for Friday, May 10, 2019 is cancelled and individuals set for Friday May 10, 2019 do not need to reschedule. However, Jurors who are currently in trial need to contact their individual court for instructions regarding the resumption of trial.

A severe thunderstorm warning was issued for East Houston until 10:15 a.m. "Tennis ball size hail has been reported with this storm."

Another view from the Sabine Bridge
Photo by Doogie Roux

No surprise to anyone: a lot of road closures Friday morning.
Screen shot from Houston TranStar
California Privacy Policy California Collection Notice
Do Not Sell My Info
Use of this website constitutes acceptance of our terms of use, our cookies policy, and our privacy policy The Houston Press may earn a portion of sales from products & services purchased through links on our site from our affiliate partners. ©2022 Houston Press, LP. All rights reserved.