Lionel Richie is For Lovers

I spotted a car on the parking lot at Smart Financial Centre as I arrived for the Lionel Richie show there last night. The vehicle stuck out like a sore thumb and made me wonder whether the person who drove it to the venue had somehow taken a very wrong turn. The back window of the car had the words “Just Divorced” scrawled across it rather boastfully, in blue and white window marker. It had to be in the wrong place because we all know that, just like Virginia, Lionel Richie is for lovers. Seeing someone’s bold expression of romantic love gone wrong at a Lionel Richie concert just seemed weirdly out of place.

Inside the venue, Richie gave the crowd what it mostly had come for, the ballads on which he’s built a long and legendary career. Whether they came from his days fronting the Commodores or were part of his incredibly successful stint as a solo artist, many are about love and are beloved. He let the close-to-capacity crowd know they could expect hits from both discographies by opening with a mashup of “Easy,” an instantly recognizable Commodores tune, and “My Love,” from his own debut solo album.

Richie was loquacious and comical. Talking with the audience in between his mega-hits assured him his voice would be the only one ringing out during those moments. Early on, he told the gathered, “For all of you who came out here tonight to hear me sing,…that’s not what’s going to happen. It never happens that way.”

Audience members giggled with befuddled amusement as he told them to look around and meet the people near them. “Now, those are the people you’ll be hearing singing tonight.”

It was absolutely true and Richie encouraged it over many songs. People sang because they know the tunes. Scroll down and you’ll see a set list from last night’s show. Nearly half those songs were Billboard Number Ones. The rest were top 10 hits. They have personal meaning to listeners. Richie said he met a fan backstage before the show, a 285-pound man who “put his hands on my shoulders, looked me straight in the eye and said, ‘Lionel, I’ve made love to you many times.'”

The fellow somewhat clumsily was attempting to tell Richie that “Stuck on You” was a song he and his wife favored for tender moments. Because the songs have such longevity, they were passed down to the families which grew from those tender moments. Richie spotted a 17-year old in the audience – one of the younger people attending, aside from Richie’s crackerjack five-piece backing band - and gleefully said, “I’ve never seen you before.”

“What we’re aiming for tonight is the new people because the only way they got here was some old people told them to come and see the show!”

Throughout the night he bridged the gap seamlessly between his Commodores work and his solo act.

“The Commodores would go to Houston, Dallas, Fort Worth, San Antonio and – whoosh! – out of there. Somebody said, ‘Sugar Land,’ and I said, ‘Where the hell is that?’” he said. “But I can see they do have people here and you are my people!”

The Commodores experienced their heyday 40 some-odd years ago, but Richie put that work on a pedestal last night, highlighting it over several consecutive tracks. “Brick House” came with a slideshow of Richie with his back-then band mates. Last night’s version featured an interpolation of “Fire” by the Ohio Players, just to take the funk meter up a notch (there was also a bit of Van Halen’s “Jump” thrown into “Dancing on the Ceiling” and Laid Back’s “White Horse” found its way into “Running With the Night”). The best of those songs might have been “Just To Be Close To You,” a scorcher last night in the set, or maybe “Endless Love,” which had couples slow dancing in the aisles and turned Smart’s video system into a "Kiss Cam" for a bit.

Richie has rejuvenated interest in his music and gained some younger fans as a judge on American Idol. Last night, he mentioned Uché, the Houston singer who competed on Idol recently. He also said it’s weird for him to be sitting between fellow judges Luke Bryan and Katy Perry on the show.

“When Luke tells me, ‘Hell, Lionel, you used up all the good words,’ what does that mean?” he said to laughs from the crowd. “And when Katy says to me, ‘I split my pants, should I tell the audience?’ That’s the way I live my life.”

As if to add to the weirdness, Richie then went into “We Are the World,” the song he co-wrote with Michael Jackson in 1985 for U.S.A. for Africa. It was a bit strange hearing a roomful of 60- and 70-somethings repeatedly singing "We are the children" to bring a night of memories to an end.

The crowd assuredly got its love song fix from one of modern music’s signature balladeers. Even if those songs somehow did not soften the heart of the "Just Divorced” audience member, it’s fun to imagine the newly-single person gleefully singing “I know it’s a shame, but I’m giving you back your name,” from “Sail On,” one of Richie’s few break-up songs. A little something for everyone.

Personal Bias: “You Are,” you are my favorite Lionel Richie song. In this ode, Richie is less Keats than Hemingway, as he eschews wordy, descriptive romanticism for a straightforward, no-nonsense declaration of love. It’s a simple, silly love song filled with the sort of sincerity that never fades over time. Richie is aware of the song’s power, obviously. He told the audience it should be singing “You Are” at least daily to function properly in life. Anyone who hadn’t filled their quota by the time he reached it in his set happily complied with his suggestion. It was one of the best group sing-alongs of the evening. 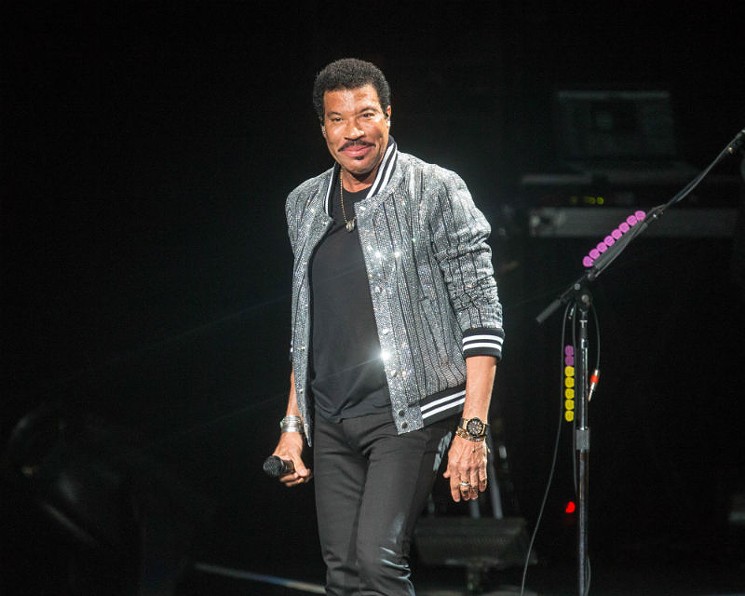 Richie wove songs from his solo career and from his time with the Commodores into the night's agenda
Photo by David Clements, courtesy of Smart Financial Centre

A close second favorite would be “Sail On,” which is also one of my go-to karaoke songs (yes, I have an actual list upon which to call if I’m called to the microphone, which also includes Marcy Playground’s “Sex and Candy,” “Gangsta’s Paradise,” by Coolio, Ms. Badu’s “Tyrone” if I'm feeling sassy and pretty much any Billy Joel tune). Naturally, I sang along to “Sail On,” with many, many fellow audience members.

The Crowd: People who’ve turned the knob to several points on the radio dial to find Lionel Richie’s unmistakable voice over the years. Some in the crowd (me, among them) likely first located him on urban radio, when his work with the Commodores merged funk and soul together for some of the 1970s’ biggest hits. Others became fans down the dial on pop music and easy listening stations as his solo work became prominent. His long history with country music – stretching back to “Lady,” a 1980 hit he penned for Kenny Rogers, and fast-forwarding to Tuskegee, his own recent duets album with some of country’s biggest acts – drew listeners who found him through country music stations. In short, it was a diverse crowd befitting a multiple Grammy winner and Songwriters’ Hall of Fame lifetime achievement honoree.

Random Notebook Dump: I’ve seen many shows now at Smart Financial Centre but have never noticed until last night that special items appear on the menu to honor whichever act is playing the hall. Maybe this is an entirely new wrinkle for the venue? Last night’s signature dish was the “Say You Say Me Beef and Bacon Dog” (though, the way Richie hammed it up all night it should really have been something featuring a well-cured ham). On the beverage menu, Smart offered the “Endless Love” cocktail - Cinco vodka, cranberry juice and lime. I admit, I would never attend a show just to see what might be on this sort of exclusive menu, but it could be fun to see if they whip up a deep-dish pie for July 3’s Chicago show or some moo goo gai pan for July 16’s show starring Asia.

Running With the Night

Dancing on the Ceiling

Lady (You Bring Me Up)

Just To Be Close To You

Say You, Say Me

We Are the World