Checking Out the Parallels Between Black Sabbath And Van Halen

Photo by David Rozycki
Black Sabbath and Van Halen both have album covers featuring angels smoking cigarettes
Being a fan of both Black Sabbath and Van Halen for many years now I noticed the two bands share a lot of common characteristics and parallels; some are major, some minor, and some trivial and coincidental. Anyway I find this stuff interesting so I decided to document my thoughts and hopefully you will find it interesting as well.

Just in case you have been in a coma, Black Sabbath formed in Birmingham, England in 1968 and are widely regarded as The Godfathers and creators of heavy metal music; Van Halen is an American hard rock band out of Pasadena, California who formed in 1972 and are known for their energetic live shows and lead guitarist Eddie Van Halen’s virtuoso shredding.

The Van Halen brothers were big fans of Black Sabbath in their early club days, with Eddie Van Halen singing lead vocals when they covered many Sabbath songs live; Eddie and Alex Van Halen even wanted to name the band Rat Salad after a Black Sabbath song until lead singer David Lee Roth talked them out of it and suggested Van Halen instead.

Black Sabbath and Van Halen eventually toured together in 1978 for eight months; the two bands had a mutual respect for each other. Eddie Van Halen and Tony Iommi particularly respected each other’s talents on lead guitar and remain good friends to this day.

Okay enough with the history lesson on with the list of parallels between the two bands shall we?
Both Bands Are Known For Their Innovative Lead Guitarists

Okay this one is pretty obvious but it had to be mentioned. Sabbath’s Tony Iommi pretty much invented heavy metal guitar playing as the band’s primary songwriter and riff master; Iommi lost the tips of his middle and ring fingers on his right hand in a factory accident which ironically affected his playing style helping to make it unique. Iommi has long been a big influence on metal, stoner rock, grunge, goth, thrash, industrial, death, doom, etc.

Eddie Van Halen of course is likewise one of the most influential hard rock guitar players in history; like Iommi he was the primary songwriter in his band. He is known for his two-handed tapping and virtuoso, highly-skilled technical guitar shredding.

Incidentally both Iommi and Van Halen started out as drummers before picking up the guitar. 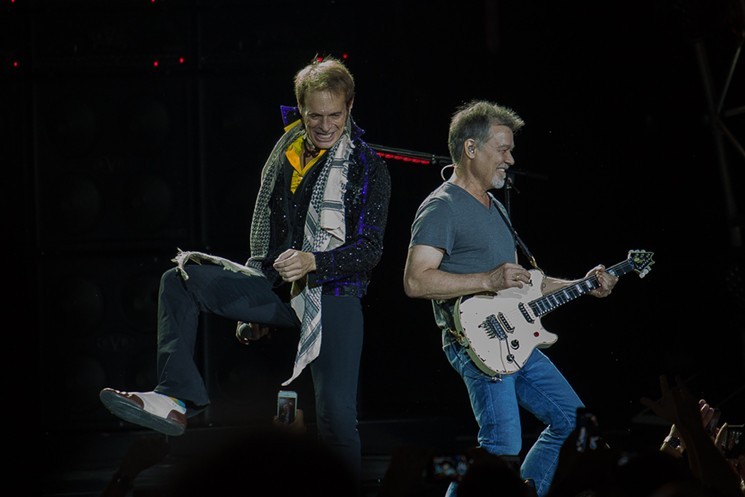 Van Halen at Cynthia Woods Mitchell Pavilion on September 25, 2015
Photo by Eric Sauseda
Both Bands Had Charismatic, Flamboyant Original Lead Singers Who Were Later Replaced With Singers Who Were Considered Technically Better

Ozzy Osbourne of Black Sabbath and David Lee Roth of Van Halen both had unique, unorthodox singing voices and were considered wild men; Ozzy probably being the wilder of the two since he eventually got kicked out of Black Sabbath for his heavy drug use. Roth didn’t get fired but he did leave as Osbourne did to purse a solo career.

Osbourne was replaced in Black Sabbath by Ronnie James Dio while Roth was replaced by Sammy Hagar; both Dio and Hagar are considered to be better singers on a technical level, both being able to hit higher notes and such. Among Sabbath and Van Halen fans there are always arguments over which lead singer was the best for each respective band; an alternative title to this bulletin point would be “Lead Singer Drama.”
Both Bands Brought In Singers From Other Successful Bands As Their Third Lead Singer

Speaking of lead singer drama, Dio and Hagar eventually left as their predecessors had and both Black Sabbath and Van Halen chose new singers that had previously been in other successful bands after their departures. Sabbath brought in Ian Gillan of Deep Purple for the Born Again album in 1983 and Van Halen hired Gary Cherone from Extreme for the Van Halen III album which was released in 1998. Both singers only lasted for one album and the fan’s reaction to both of these singers was mixed; Sabbath fans generally liked the Born Again album more than Van Halen fans liked Van Halen III which was hated by most and the critics panned it as well.
Both Bands Were Signed To Warner Brothers Records

Okay this detail might not seem as relevant as some other points but it is true both bands were signed to Warner Brothers Records, now known as Warner Records, during their heydays. That is something I noticed as a young junior high school kid, that both bands had the same white lettering font on the sides of their cassette cases because they were on the same record label. It was significant in the fact that this is why both bands toured together in 1978.
Both Bands Have A Song With “5150” In The Title

For Black Sabbath, from what I could gather from several sources on the Internet, the meaning of 'E5150' is "EVIL", with the letter "E" at the beginning and "VIL" spelled out as Arabic equivalents to Roman numerals 5, 1 and 50.

Van Halen came up with “5150” since it was the name of Eddie Van Halen’s home recording studio, which itself was named 5150 after a California law enforcement term for a mentally disturbed person, a reference to Section 5150 of the California Welfare and Institutions Code.

So it’s kind of interesting how these two bands came up with 5150 in titles of their songs and it makes you wonder how many fans out there still have no idea what it means on either album.
Both Bands Have Album Covers Featuring Angels Smoking Cigarettes

The ninth studio album by Black Sabbath was called Heaven And Hell; it was the first album the band recorded featuring Ronnie James Dio on vocals and was released on April 25, 1980. The album cover art was taken from a painting by artist Lynn Curlee, Smoking Angels, featuring-you guessed it-three smoking angels. The art was inspired by a 1928 photograph of women dressed as angels smoking backstage during a break at a college pageant.

Four years later, Van Halen released their 1984 album featuring cover art of a single little boy angel smoking a cigarette created by Margo Nahas. Okay technically it’s a cherub smoking the cigarette on the Van Halen cover not a full sized angel but it’s pretty much the same thing as far as I am concerned.

It should be noted that once again Black Sabbath did it first as usually seems to be the case.
Both Bands Had Successful Reunions While Kicking One Original Member To The Curb

In 2006 Eddie and Alex Van Halen reunited with David Lee Roth, this time with Eddie’s son Wolfgang on bass instead of original bassist Michael Anthony. It is assumed Anthony was not invited back because he remained friends and played with Sammy Hagar on a tour called “The Other Half” that same year; Anthony and Hagar have remained friends and bandmates in various projects ever since while remaining alienated from the Van Halen camp.

In 2012 Black Sabbath reunited without original drummer Bill Ward who said that he would not participate without a “signable contact.” Ward has said in various interviews that basically the amount of money he was offered for the reunion was insulting; the other members of Sabbath have suggested that Ward couldn’t physically handle the job of drumming for the band anymore so he had to be replaced.

Interesting enough in recent years Iommi and Osbourne have expressed regret that Ward was not involved in Sabbath’s final tour and have hinted they would possibly like to reunite with Ward for a few final shows, getting the original lineup together again one last time.
Both Bands Have Had Members Who Battled Cancer

Eddie Van Halen was treated for tongue cancer in 2000; he underwent surgery that removed a third of his tongue. Van Halen has blamed brass and copper guitar picks which he held in his mouth for his cancer diagnosis.

Tony Iommi was diagnosed with lymphoma in 2012; his cancer has been in remission since August 2016.

Ronnie James Dio was diagnosed with stomach cancer in 2009; tragically, he died from the disease on May 16, 2010. Dio’s last live performance was August 29, 2009, in Atlantic City, New Jersey with Heaven & Hell aka Black Sabbath.

Both bands have had band members who have battled alcohol and drug addiction; not unique in the world of rock and roll though.

Both Tony Iommi and Eddie Van Halen have said that they do not like the term heavy metal to describe their music.

Both Tony Iommi and Eddie Van Halen are known for their instrumentals and instrumental intros to songs on their albums; once again Black Sabbath did it first.

Both bands were inducted into the Rock and Roll Hall of Fame; Sabbath in 2006 and Van Halen in 2007.

Both bands rock and kick much ass! Where are the new bands of today that will carry on the torch? I wonder.
California Privacy Policy California Collection Notice
Do Not Sell My Info
Use of this website constitutes acceptance of our terms of use, our cookies policy, and our privacy policy The Houston Press may earn a portion of sales from products & services purchased through links on our site from our affiliate partners. ©2022 Houston Press, LP. All rights reserved.