Photo by Shaun Lile
Lahna Turner in her element: onstage with her guitar and a microphone.

Lahna Turner is returning to the city that gave her first crack as a comic – and soon after, paid her for it.

“I grew up mostly in Houston,” she says. ”I moved from Canada, but I started comedy in Houston at the old Laff Stop. I play guitar, so I’m a musical comic and when I went into the Laff Stop, two months [after my first time onstage], I got paid to do my first gig. That’s kinda where it all started and ended for me. It was literally like 20 bucks, but when the manager put it in my hands, I was like WHAT’S THIS FOR? And he was like, you just performed and I’m paying you. I couldn’t believe I got paid to do that. And 20 years later, I’m still getting paid the same amount!”

With a guitar as her weapon, Turner can vividly recall the first funny song she penned. “I went to college at South West Texas University [now Texas State University], and when I was there, I started writing songs and I actually wrote my first comedy song the night I had a car wreck! I was driving home from San Marcos to Houston, and maybe an hour or so before the accident, you remember the old Judds’ song “Daddy’s Hands” – so I heard that and it made me laugh, so I wrote a dirty version of Daddy’s Hands on a piece of paper and I put it on the car seat next to me, and I’m kind of singing it and driving down the road before I FLIPPED my car and the lyrics flew out the window. I picked them up and put them in my pocket. I woke up the next morning and was in a lot of pain. But a year later, I went to the Laff Stop and played that song. And a friend of mine who was more religious said,  ‘Maybe God was trying to tell you NOT to do this!’”

The old Laff Stop turned out to be quite a fateful location for the comic, who will be headling a short tour of Texas, including a stop at Houston’s Sable Gate Winery on June 27. The Laff Stop is where she met her future husband, Houston comedy superstar Ralphie May.

“So the first time I did stand-up at the Laff Stop, I had an amazing first time for a comic,” Turner recalls. “The Houston comedy scene is REALLY good, there’s a really good group of comics in Houston. So when I walked in, one, as a female – and there weren’t many females back then -  and two, with a guitar, I got a lot of attitude back, including from Ralphie. He came up to me and asked: Can you play that thing? Can you sing? Are you funny? I was like: Man, what an ASSHOLE, right? But after my set, he came up to me and said you’re really, really funny. And I was like whatever. But he told me he doesn’t joke about funny.”

After May gave Turner his “pager number,” they became close, Turner says. “I did not want to date a comic EVER, but we became friends. He was very, very overweight – at that point he was like, 800 pounds. But I fell in love with him, he was very sweet and funny, we spent the next 17 years together.

"The last two years of his life, he was awful to me; I’ll be honest. Ralphie became more of a food addict, which he was his whole life, obviously. But addictions change over time, I’ve learned a lot about addiction and he shifted toward a lot of prescription pain pills and he had access to pretty much everything he could ever want through the people around him. The people supplying that stuff to entertainers, but anyone can get it, I guess. So he spent the last two years when we were together pretty stoned, and when we weren’t together anymore, he was pretty angry. So that’s really a sad part of the story.” 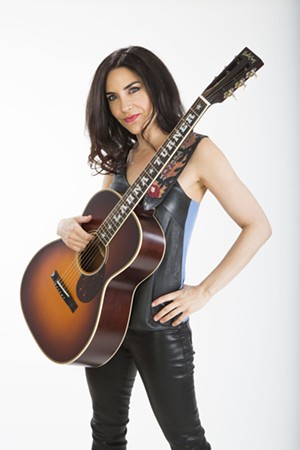 Before Turner and May began divorce proceedings two years before May’s passing [the divorce was never finalized]  she says that the late comic attempted to get the emergency surgery to deal with his weight issues. “The timeline is hard here, but about four years ago, he wanted to get the lap band. So I thought it would be important to document that. A big part of our relationship was always me trying to help him get healthy, and I’ve learned a lot about my role in what it means to be an addict and addiction.

So together, we decided to hire a documentarian to follow his weight loss journey. He had been on a show called Celebrity Fit Club and he lost quite a bit of weight on it - I began to see that a camera might help him. This woman named Cat Rhinehart, and she literally became the director, producer, editor [of this project]. She followed him for nine months and documented this man who chose not to lose weight, who chose not to find sobriety, and who was really sick. She also documented his wife, me, inadvertently. I didn’t intend to be in this film at all, but I was on my own journey to realize: you can’t change anyone. The only person you can change is yourself.”

While May’s story ends in tragedy – he passed away in Las Vegas from cardiac arrest and complications of pneumonia on October 6, 2017 – Turner hopes this forthcoming documentary may shine a light on addiction and bring about positive change.

“Cat began editing this film that was a weight loss journey that didn’t work out, and then he passed away. So a really sad ending became an even sadder ending. I’m really proud of the film. I know it's going to help people. Its already helped my friend, who hasn’t touched sugar since watching it. And when Ralphie died he had $280 in his bank account. He left me with a lot of debt. He was really sick and he took a lot. I’ve learned from my own actions. When he filed for divorce, he left the marriage. But in the film, I see I should have left him years earlier. He was never going to get better. I think everyone struggles with this. I think it’s a really important story and not something that has been previously captured.

"I think of other great comics who have passed in our business, like someone like Robin Williams, can you imagine footage of him a year before he took his own life. What must that have been like for the people around him? We all loved the Robin Williams we knew, but we all know he had demons right?”

At the end of the day, Turner appears to feel the documentary has a wider reach than simply fans of May’s stage work. “I feel like if this were a story about your neighborhood post office worker, you’d still be interested in it. To be a fly on the wall of this person’s last [attempt] before he gave up. He had a wife that loved him, two beautiful kids, a career, money, cars, everything he ever wanted. But in the end [May felt that] it’s not the journey to the top, because you’re all alone when you get there, and you’re so depressed. Any good documentary doesn’t end where you think it does.”

The bright side (if there is one), is Turner has been able to deal with her late husband's life ending through her lens of humor. “Tragedy plus time equals comedy, as it is really true,” she quotes. “I’ve been able to incorporate so many things that have happened as a result of his passing and how he passed, in my act." With songs and stories, Turner is turning her grief into something that can heal the way great relatable comedy only can.