Photo by Jesse Sendejas Jr.
Swimwear Department got wild at Mongoose Versus Cobra.
As we said Tuesday in our first installment, we took in 30 songs by 30 acts seen in Houston over the last 30 days (give or take a day). Presented in three parts, this is one person’s musical trek across Greater Houston and just a glimpse of where music is happening in the city.

Presented in no particular order, here is the second set of songs that left an impression:

Twenty-five years on, Houston’s own "Vatos Rudos" are as popular and busy as ever. The band recently hit Avant Garden on the heels of a triumphant turn at Las Vegas’ Punk Rock Bowling, where they represented      H-town with a sold-out show and rubbed elbows with groups like Rancid and The Specials. Back at home, front man Felipe Galvan told a packed room it was the first time in years they’d played Avant Garden, then launched into a “Borracho,” a crowd-pleasing staple in Los Skarnales’ set and an anthem for Houston’s booze hounds. 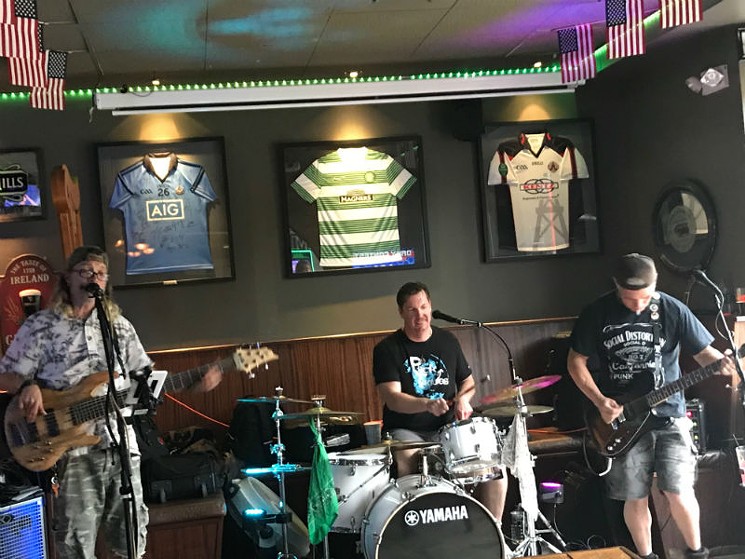 Only the worst of insufferable music snobs would look down upon Houston’s working cover bands. There are plenty out there, playing all the hits you know and love, and they’re vital to the city’s bar and brewery industries. 80-HD is a three-piece that moved us from the back of the bar to front row seating with this mashup of The Romantics’ head-bobber and John Cougar Mellencamp’s ode to his own music heroes. The songs morphed into each other effortlessly and got some of Pimlico’s patrons dancing in broad daylight, the benchmark for whether a cover band has the goods.

Canadian hip-hop artist SonReal is still developing a Houston following, but those already in the know were treated to a set heavy on songs from his new, stellar album, The Aaron LP, when he stopped at The Secret Group last month. “My Friend” is a bit older, but it helped set the blueprint for the new album, which is awash with deeply personal songs. SonReal wrote “My Friend” for his late father, so singing the song’s chorus alongside my own son, who introduced me to the rapper’s work, was a high point of the show.

The perfect song for the moment: it’s something a true music fan is listening for in any deejay set and it’s always there when Flash Gordon Parks is behind the turntables. Houston’s self-described “Ethnomusicologist, Collector, Documentarian” got the crowd hype for visiting act Mexstep (more on him and his brilliant new album in the next installment) and then kept the party going post-set with hip-hop classics that sent Cactus shoppers to the racks in search of old favorites. Salt-N-Pepa’s “Expression” isn’t just a body mover, it’s a salute to personal creative expression and it’s “you gotta be you and only you, babe” message tied neatly into the sentiments of Mexstep’s live set.

Just Hangin' Out made Houston a stop on her summer tour
Photo by Jesse Sendejas Jr.
“Layin’ Down,” Just Hangin’ Out, House of J, May 29, 2019

Just Hangin’ Out is the moniker under which singer-songwriter Cat Darshad performs. The Austinite by way of Houston returned home to play a house show as part of her summer tour, which sent her east and Midwest to Louisiana, Tennessee, Indiana, Illinois and Missouri. She captured moments along her tour for a new video of this song, a favorite which borrows from Gym Class Heroes’ “Taxi Driver” by naming bands and friends in the song’s lyrics about roaming the globe. 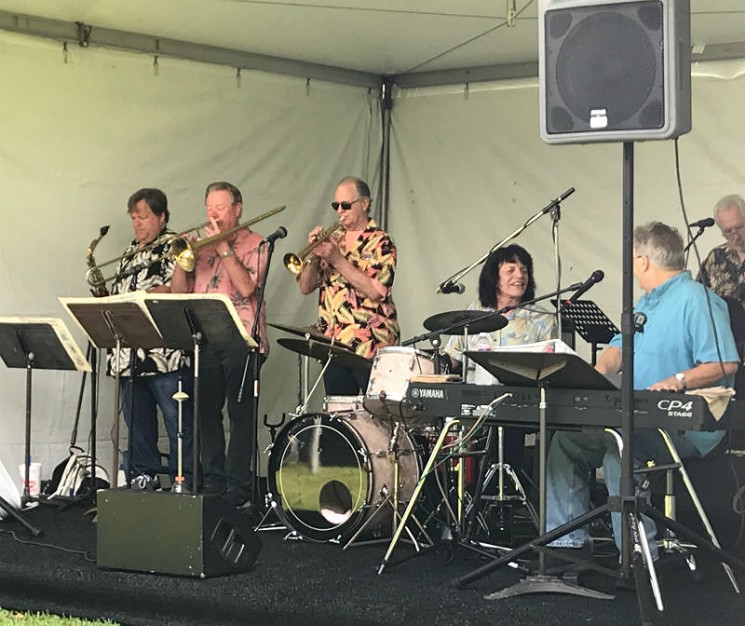 “Does Anybody Really Know What Time It Is?” The Royal Sounds, Fort Bend Country Club, June 30, 2019

Houston music veteran Kelly Dean has played gigs all over this city in all sorts of settings, with students, fellow music veterans and music superstars. He said this gig was the first time he’d ever played a shuttering golf course. Dean was on sax and vocals for The Royal Sounds, a band of well-regarded Houston music vets like drummer Ronnie Hall and bandleader Kit Reid, who pieced the group together just for this gig. The moment was notable: it was the swan song for Fort Bend Country Club. The golf course closed after 69 years of operations and The Royal Sounds ushered it into oblivion on its last evening of operations with the Chicago classic about time. It was an especially poignant selection for long time members of the golf club who were celebrating and lamenting the closing of their home course.

This is Houston's hottest party band, y'all
Photo by Jesse Sendejas Jr.

If most of the songs in a band’s repertoire concern swimming pools or shopping malls, it’s almost a given they’ll zoom to the top of anyone’s list of favorite party bands. That’s the model for Houston’s Swimwear Department, which isn’t just a one-note surf rock novelty, but an act built on solid musicianship, manic showmanship and all-around fun. “Seventeen Swimsuits” is a song which brings both swimming and shopping together for the ultimate SWD tune. Midtown’s craft beer haven Mongoose Versus Cobra was marking its seventh anniversary and the celebratory mood was perfectly captured by the song’s line, “You got that feeling that you’re feeling when you get a good deal on seventeen swimsuits!”

Houston’s only accordion cover trio took the stage for an afternoon set at Saint Arnold’s 25th anniversary celebration and got things started correctly by positing that sweet dreams are made of beer, sun, friends and music. Band member Erin Rodgers took the lead vocals for this Eurythmics hit and sounded fantastic, but the stars of Houston’s A S S (the acronym stands for “Accordion Super Stars” or “Accordion Squeezy Squad,” depending on who you ask) are the instruments. Hearing them in unison on old classics like “Hotel California” and new classics like “Old Town Road” got the crowd ready for an anything-goes day of fun.

An Ak’chamel set is something you can’t prepare for, you just dive in and see where the sounds of the experimental/noise act take you. Also, as we learned by chatting with the band after its set (they’re super nice, despite the daunting costumes they perform in), most Ak’chamel gigs don’t feature a lot of the band’s pre-recorded music. Ergo, no title for the show-closer which mesmerized us at a recent Big Top show. The low hum of the tune caused an ASMR reaction for this listener, who dopily enjoyed the scalp-tingling pyrotechnics Ak’chamel set off.

Any new business venture comes with a little anxiety, but the right song can calm even the shakiest of nerves. The folks at the new midtown spot Social Beer Garden HTX seem pretty confident in their brand, which includes a spacious beer garden setting with food trucks and hammocks and ample indoor digs for beating the Houston heat. Still, they’ve only been operating since May 7, so hearing local music veteran A.J. Santana (Beggars Inc., Murder of Crows booking) singing about surviving probably was reassuring in the venue’s earliest days.
California Privacy Policy California Collection Notice
Do Not Sell My Info
Use of this website constitutes acceptance of our terms of use, our cookies policy, and our privacy policy The Houston Press may earn a portion of sales from products & services purchased through links on our site from our affiliate partners. ©2022 Houston Press, LP. All rights reserved.