Photo by Bread and Water Productions
Fire first, then ice.
Beavis and Butthead might be screaming "Fire, Fire," but it's all an illusion when it comes to the magic of Robby Bennett. The Clear Lake native is returning home for a one-night show in Galveston this weekend. Also on our radar is Friday's White Linen on Navigation, Bill Arning's curated list of must watch queer shorts on Saturday, and Sunday's H-town Sneaker Summit. Plus you'll want to catch Catastrophic's Speeding Motorcycle before it wraps. 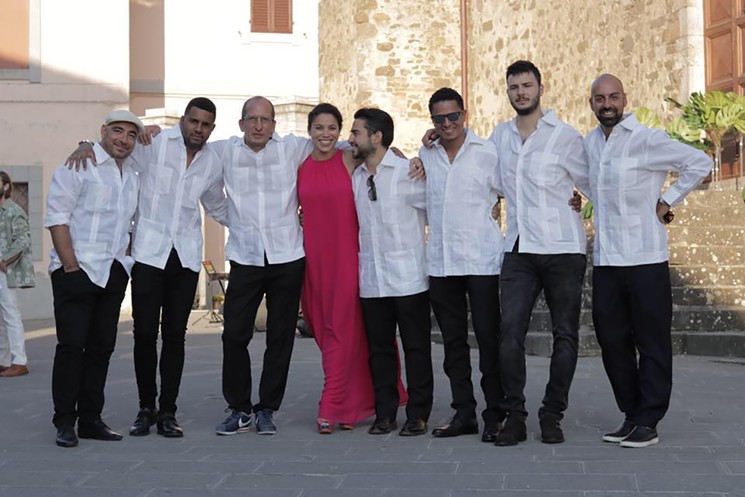 This Italian band would fit right in this Friday night.
Photo by Silvia Calvanelli via CC 4.0
Not to be confused with a similar-sounding event in the Heights — that one is next weekend (August 3) — this weekend brings White Linen on Navigation, presented by Party on the "E" in partnership with the East End District, Houston Young Professionals, Red Carpet Events, LinkedIn Houston and Tap Truck (for bevvies). Save room for light bites from El Tiempo, Ninfa's and Merida Mexican Restaurant, wear your finest white clothing (por seguro), and then see and be seen along the East End Esplanade.

White Linen on Navigation is scheduled for July 26 from 7-10 p.m. Friday at East End Esplanade, 2800 Navigation. For information, call visit facebook.com/PartyOnTheE. Free to $20. 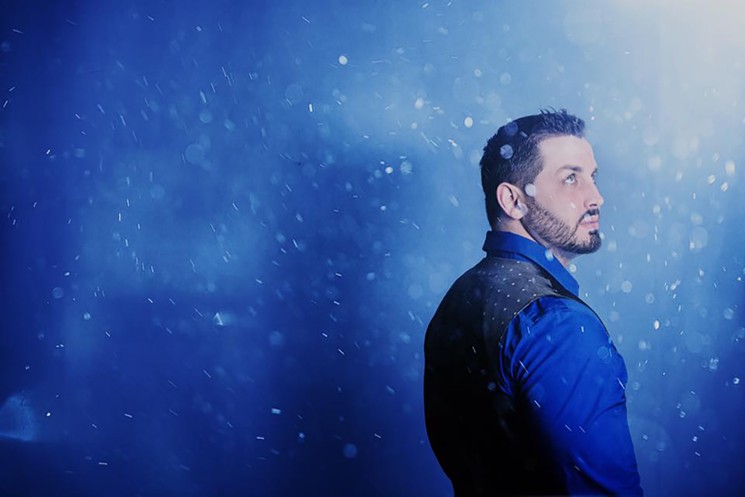 Robby Bennett wants to alter your perception of time and shatter your sense of what’s possible.
Photo by Bread and Water Productions
Modern audiences expect much from a magician and so Robby Bennett, a Clear Lake native who has been doing gigs since he was 13 years old, has really honed his craft since those early days working home shows at GRB. He's performed all over the world and for those who missed his December show at the Wortham, he's back with Anomaly: The Magic of Robby Bennett and Other Curiosities for one night only in Galveston. Yes, he does magic and acrobatics, but his routines are also part stand-up, part storytelling, and there's another H-Town connection to the show. His longtime friend and local artist Ben Workman, aka Jumper Maybach, has been appointed its design and artistic director, allowing Workman to infuse the scenery and graphics with his distinctive, abstract style. If Galveston has been on your summer to-do list, then this just might be the weekend for magic. Our critic declares Speeding Motorcycle "epic in scope."
Photo by Anthony Rathbun
The reviews are in, and we'd never forgive ourselves if we didn't point you to The Catastrophic Theatre's Speeding Motorcycle before the production closes. On the surface it's a show about mental illness and, in the wrong hands, could result in a sobering — or worse preachy — disaster. But as co-directed by Jason Nodler and Tamarie Cooper, and with some of our favorite actors portraying aspects of musician Daniel Johnston, we've got a dynamic and bittersweet rock opera that our critic labels "epic in scope" and that truly pays homage to Johnson's artistic legacy. Portraying different mental states of Johnston's alter ego Joe Boxer, Greg Cote charms when he sings "Life in Vain," Joe Folladori rips our hearts out singing "Peek-a-boo," and Kyle Sturdivant's performance is basically a show-stopper.


Wondering what Bill Arning's been up to since his sudden exit from the Contemporary Arts Museum Houston? There are still a couple of days to see "Stonewall 50" at CAMH; Arning proposed the exhibit and curator Dean Daderko brought that vision to life. Now QFest organizers have called on Arning to guest curate an evening of contemporary short films under the umbrella of Men's Own Stories; the selection touches on both intimate and emblematic facets of queer culture. Expect shorts from Duane Michaels, Glenn Fogel, Marc Adelman, Skylar Fein and William E. Jones. After the 1973 mass murder of gays at the UpStairs Lounge in New Orleans, artist Fein mounted an exhibit about that tragic fire that went on to gain national prominence. Jones's 30-minute film, Fall into Ruin, focuses on the Greek art collector who gave Andy Warhol his first solo show in 1952. 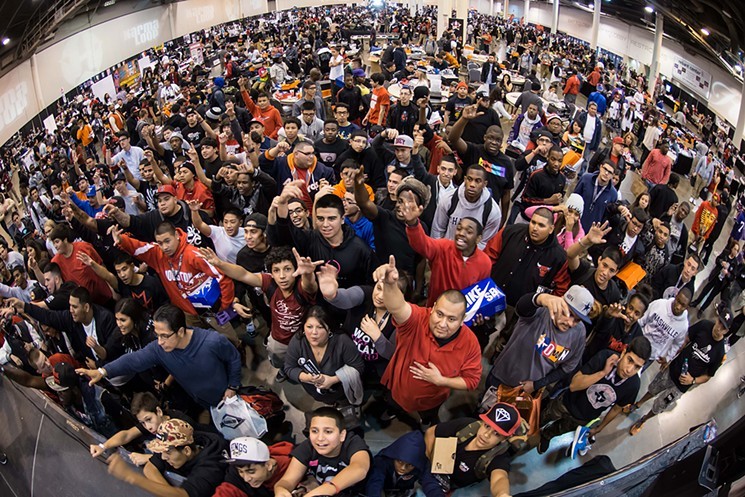 H-town Sneaker Summit has grown over the years to become the biggest sneaker convention in the country.
Photo by Marco Torres
The largest gathering of sneaker heads, celebrities and brands in shoe culture is right here in the Bayou City with the wildly popular H-town Sneaker Summit. Bear witness to a celebration of sneaker culture where enthusiasts gather to buy, sell, trade, browse and discuss rare and collectible footwear, fashion and accessories. Celeb sightings at previous iterations include Bun B, Slim Thug, Swisha House, Donkee Boy, ESG, Lil Flip, Paul Wall, Screwed Up Records, Dice Soho — some as exhibitors and others as sneaker heads — so there's no telling who you'll see at this massive cultural phenomenon.

Maurielle McGarvey adapted Georg Büchner's unfinished play to create a world premiering adaptation of Woyzeck.
Photo by Tasha Gorel
Our bonus event this week will appeal to those who truly understand stagecraft. Rec Room took a risk and went out on a limb to present a brand new adaptation of a 19th century play, tasking Houston- (and LA-) based playwright Maurielle McGarvey with reimagining Georg Büchner’s unfinished Woyzeck and creating something new, making its world premiere in Houston. McGarvey's vision might have been pared down a bit too much; its 50-minute length makes it difficult for audience members to find the common thread, though there are flashes of amusement, confusion or upset. But kudos to director Matt Hune for trying to give us something other than the same ol', same ol' and — more than that — delivering a stylistically rich production that is enhanced through the use of chorus members flanking the stage. If you don't know what emotion to feel during any single scene, just look to this group. And the breakout star of the whole show isn't even seen; it's the inventive sound design from Robert Leslie Meek.

Woyzeck is scheduled for July 17 through August 3 at 7:30 p.m. Wednesdays and Thursdays, 8 p.m. Fridays and Saturdays at Rec Room, 100 Jackson. For information, call 713-344-1291 or visit recroomarts.org/woyzeck. $15 to $30.
California Privacy Policy California Collection Notice
Do Not Sell My Info
Use of this website constitutes acceptance of our terms of use, our cookies policy, and our privacy policy The Houston Press may earn a portion of sales from products & services purchased through links on our site from our affiliate partners. ©2022 Houston Press, LP. All rights reserved.