Photo by Christi Vest
Mary J. Blige and Nas brought The Royalty Tour to the Cynthia Woods Mitchell Pavilion Friday night.
Al Pacino’s Scarface played on the screen at the Cynthia Woods Mitchell Pavilion Friday night as the houselights came down. The sound from the film faded out and the familiar plucking of guitar strings from Nas’ “The Message” softly drifted from the speakers. The soundtrack, gradually increasing in volume, welcomed the Queensbridge MC to the center of stage. Draped in all white with his signature chain dangling from his neck, diamonds sparkling so strongly you could barely make out the “QB” on the pavilion’s screens, Nas lifted his fist in the air and began the opening verse from his sophomore album.

“There’s only one life, one love so there can only be one king!”

His voice hung in the air as the stage illuminated with the sound of the gunshot blast intro from “Made You Look.” The audience jumped to their feet as Nas ran through the 2002 hit.

“Houston! I love y’all!” he yelled finishing the song to a roar of applause. Now what’s her name?!”

Chants of Mary rang out into the night as the lights dimmed and video of Diddy letting the crowd know to “Hail the Queen” played onscreen.

The queen walked onto the stage, showered by a single spotlight, dressed in all black, with “What’s The 411” embroidered across her chest. The piano chords for the Lil Kim assisted “I Can Love You” brought even more cheers as Mary J. Blige danced across the stage. 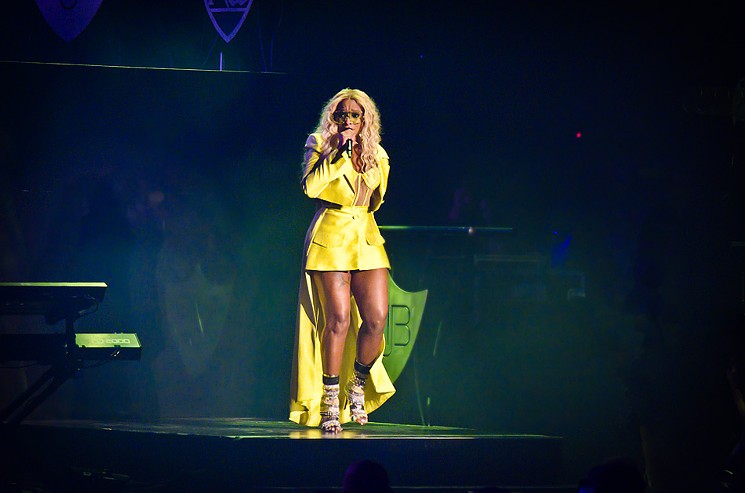 Blige performed and celebrated 25 years since the release of her sophomore album My Life.
Photo by Christi Vest
The Royalty Tour brought together “Nasty Nas” and “The Queen of Hip-Hop Soul” to celebrate their cultural influence in the music and entertainment world. It has been 25 years since Blige released her sophomore album My Life and Nas released his debut album Illmatic. The two have 24 studio albums and even more artist features between them giving the duo a huge catalog of hits to perform. Nas dropped verses from hits like Missy’s “Hot Boy” while Blige had a complete video montage of songs she’s been featured on, opening up with Method Man’s gritty “You’re All I Need.”

Nas looksed out over the audience.
Photo by Christi Vest
While Nas maintained his cool demeanor, Blige performed with an infectious energy that made it difficult for anybody watching not to enjoy. She poured herself into the show, belting out notes and dancing nonstop with the audience. At one point in the show she was interrupted by stage hands prompting her to stop the show because of an incoming lightning storm. After a long lull, required to bring everyone from the lawn underneath the pavilion, Blige reemerged on the stage and immediately brought the energy back up.

“You know why Nas and I named this tour Royalty?” she asked while standing under a banner celebrating 25 Years of My Life. “Royalty means to be tested, tried and to be proven. Nas and I have been tested and tried. You have been tested and tried. You have been with me through ups and downs. Through success and failure. Through it all we have been proven. I’m talking to the real fans…the ones that have been there since day one!”
California Privacy Policy California Collection Notice
Do Not Sell My Info
Use of this website constitutes acceptance of our terms of use, our cookies policy, and our privacy policy The Houston Press may earn a portion of sales from products & services purchased through links on our site from our affiliate partners. ©2022 Houston Press, LP. All rights reserved.