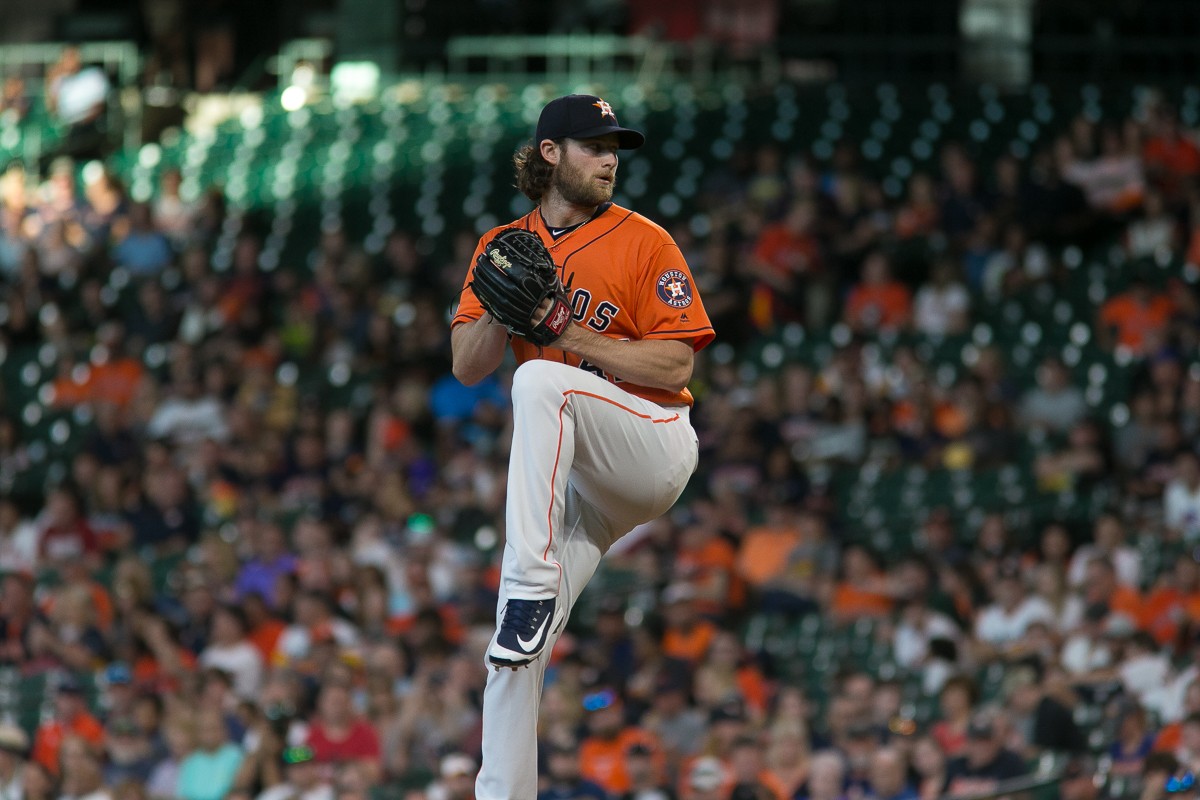 Photo by Eric Sauseda
Gerrit Cole's hamstring is OK after a scare, and it needs to stay that way.
After a really couple days in Chicago, which saw the Astros play three games in 48 hours, losing a pair to a less-than-mediocre White Sox team (one in a crazy 13-9 game on Wednesday afternoon), the team got at least a bit of good news.

In the second game of a doubleheader on Tuesday — the result of a rain out Monday night — starter Gerrit Cole was scratched from the lineup after reporting discomfort in his hamstring. Zack Greinke had just wrapped up his second win as an Astro and the team had been rolling offensively. Instead of one of their aces in Cole, the 'Stros threw out a batch of relievers, depleting their stores for Wednesday and costing them a loss against a weaker opponent.

On Wednesday, it was clear the team was concerned even though reports were circulating that they didn't believe Cole's injury was serious. Fortunately, they were right. Tests revealed no significant damage and Cole is now day-to-day. He will not accompany the team to Oakland for their four-game series against the A's but could return for the four-game set against the woeful Detroit Tigers.

It was pretty shocking to see the Astros go 1-4 in their last three games, the final tilt against the Orioles after smoking them for 23 runs followed by losing the last two at the White Sox, especially considering the runs they continue to put up, but given the bizarre scheduling circumstances, it's tough to lend much credence to anything other than a kink in their season at the moment.

Still, having a big cushion against the A's and good news with Greinke gave fans less reason to worry. As we pointed out here recently, health is really the only enemy of the Astros down the stretch. Sure, they want to catch the Yankees and Dodgers, who both sit two games ahead of Houston for the best record in baseball, for home field advantage, but keeping their best players upright is far more important.

And after this series in Oakland, the squad come home for a ten-game home stand that includes the Tigers and the Angels, who the Astros have owned this season, much like the rest of the AL West.

With their starting pitchers healthy, this team remains one of the absolute best in baseball, particularly while they are crushing the baseball, but an injury to a starter like Cole could put a dent in their World Series aspirations. Fortunately, Cole will be back soon and is healthy. We can just hope, he and his teammates stay that way.
California Privacy Policy California Collection Notice
Do Not Sell My Info
Use of this website constitutes acceptance of our terms of use, our cookies policy, and our privacy policy The Houston Press may earn a portion of sales from products & services purchased through links on our site from our affiliate partners. ©2022 Houston Press, LP. All rights reserved.