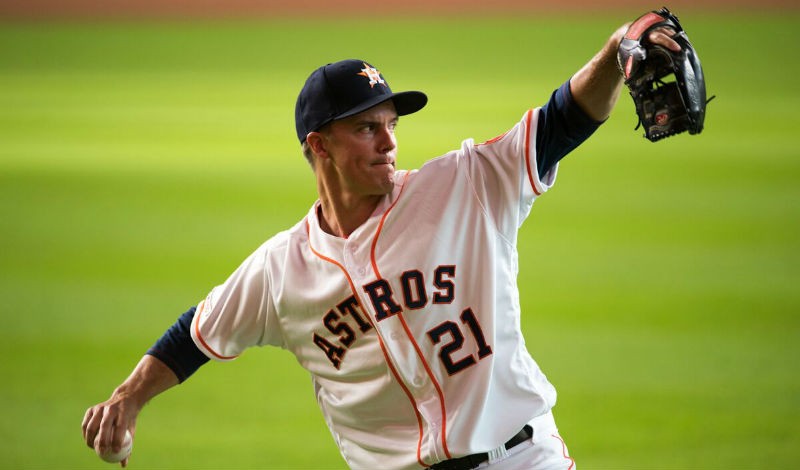 Photo by Jack Gorman
Zack Greinke didn't save the Astros season Sunday. He just collected his 200th win after a tough road trip.
It is hard to classify a game in August for a team that is six-and-a-half games up on its closest division rival with one of the best pitching staffs and lineups in baseball as "must win," but Sunday's game in Oakland for the Astros had something akin to that feeling. Losers of six of the last nine, all on the road, including three straight against the team closest to them in the standings, the Astros needed a win before heading home for ten straight including seven against the Tigers and Angels.

Fortunately, they had their latest acquisition, Zack Greinke on the hill. Greinke was masterful and efficient allowing only one run — a solo homer in the fourth — and going seven innings on only 91 pitches. Ryan Pressly and Roberto Osuna cleaned up the eighth and ninth allowing one hit apiece, a welcome sight for Astros fans who had seen some shaky outings from the back end of the bullpen lately.

For Greinke, it was his 200th career win. For the Astros it was was win number 79 on the season putting their lead on the A's back at seven-and-a-half with just 37 games remaining. They are three back of the Yankees and two of the Dodgers for the best record in baseball.

At this point, home field advantage is not overly important. The Astros are likely going to need to win some road games in the postseason anyway. Right now, it's about getting back in a groove before the playoffs start.

The Astros recent history points to struggles in the month of August. In the last three seasons, they were just 41-43 in the month. This August, even after a tough five-game losing streak, they are 10-5. We're no math experts, but that tells us outside that rough patch, they are perfect in August with 12 games remaining with 10 at home and the only two away games against the Blue Jays the last two days of the month.

That still gives them a chance to close the gap on the Yankees and Dodgers while sealing up the division, which they are likely to do in the next two weeks.

So, yes, it was a very rough road trip, but the Astros remain one of the best teams in baseball with under 40 games to play and a soft schedule. This will be, even if they are .500 the rest of the month (they won't be), the best August in the last four seasons.

Even after a tough week and a Sunday that felt like must win, don't kid yourself. All is still right in the Astros world.
California Privacy Policy California Collection Notice
Do Not Sell My Info
Use of this website constitutes acceptance of our terms of use, our cookies policy, and our privacy policy The Houston Press may earn a portion of sales from products & services purchased through links on our site from our affiliate partners. ©2022 Houston Press, LP. All rights reserved.