10 Best Bets This Weekend: Sunday Polo and Jockeying for the Oval Office

Photos by DonkeyHotey/Flickr via CC
Ten Democratic candidates are slated for the September debate (green check marks). There are still 20 Dems in the race while six have dropped out.
All eyes are on Houston this Thursday with the Democratic debates, but that's just the opening volley for this weekend in Houston. We've got the "David Beckham of polo" coming for the International Cup, more than a few theater offerings, and Paul Anka kicking off the 125th season for The Grand 1894 Opera House.

It's the ultimate battle of Love It or List It. Do we stick with the president we've got or try our hand at door number two? It's too fluid a situation, with 20 Democratic candidates, three Republican candidates and an incumbent all vying for the Oval Office. We'll get a chance to hear more from the top ten Dems (as deemed by polls and fundraising) this Thursday night in Houston. Whether you were one of the lucky few to snag the student, faculty and staff tix to H&PE Arena at Texas Southern University, or you'll be watching from home or your neighborhood sports bar, it's never a bad idea to be informed.

A quick glance through Facebook shows Debate Watch Parties at TSU's Sawyer Auditorium, Rice University's Duncan Hall, Hughes Manor on Washington Avenue, Axelrad on Alabama, Jason's Deli on FM 1960 West, and Shape Community Center on Live Oak. Check your FB feed as we expect a few more pubs to enter the fray; props to whomever develops Bernie, Elizabeth and Uncle Joe-themed drinks. Like any good marathon, those participating in tonight's debate have been in training mode. The June debate in Miami was two hours, July's in Detroit was two and a half hours, and tonight's is expected to last three hours. Moderators are George Stephanopoulos, David Muir, Linsey Davis and Jorge Ramos.

The Democratic Presidential Debate is scheduled for September 12 from 7 to 10 p.m. in Houston, broadcast on ABC and Univision.


Joshua Ford's play, To Kill a King (or City of Good Abode), offers a behind-the-scenes look at the 1968 sanitation workers’ strike in Memphis, the fateful visit by Dr. Martin Luther King Jr., and how American Jews stood in solidarity with the African American community while others turned their backs. Eileen J. Morris, artistic director of The Ensemble Theatre, spotted the gem when she was reading for the Jewish Plays Project; the selection was named winner of JPP's New Plays Contest in 2017. So there's something poetic about the upcoming production of City of Good Abode in Houston, co-presented by Ensemble and the Evelyn Rubenstein Jewish Community Center of Houston. Rachel Hemphill Dickson is on deck to direct, and taking the stage are Curtis Burrell, Mark Mendelsohn, Liz Rachelle, Lydia Meadows, Derrick Brent, Jessica Thompson, Carl Masterson and Aaron Ruiz.

Better than 25, not as good as 30, Scriptwriters Houston keeps on keepin' on with its annual short play festival. The 29th Annual 10x10 is supplemented this year with a short film festival (helps keep audience members from getting restless and makes scene changes a breeze). The plays must be new and ten minutes in length — the judges actually read the scripts aloud with a stop watch — and the playwrights must live within 100 miles of 77002. Come get in on the ground floor and check out these new plays and 90 second shorts.

Performances of the 29th Annual 10x10 are scheduled for September 12-14 and 19-21 at 7:30 p.m. Thursdays through Saturdays at The Company OnStage, 4930 West Bellfort. For information, visit scriptwriters-houston.org. $17.

Comedy can always be mined when it comes to eccentric groups of people who have nothing in common but circumstance. It worked for television's Gilligan's Island and, for the University of Houston School of Theatre & Dance's upcoming production of Ring Round the Moon, we'll still see a millionaire, a beautiful woman, mistaken identities and plenty of scheming. Written by Jean Anouilh and adapted by Christopher Fry, this production is set around a masked ball and includes twin brothers — one is shy and sensitive, the other heartless and aggressive — and the age old problem between the haves and the have nots. Jack Young directs.

Smells are known to trigger memories — both good and bad — and Houston author Norma J. Thomas touched on the subject first in her memoir The Smell of Garlic, and later adapted into a stage play titled Personifications. Billed as a "coming into audacity memoir," Thomas's book packs photographs, anecdotes, and moments of clarity, from age five to womanhood. The stage play gets its moment in the spotlight this Friday in a coproduction between Thomas and French Creole Productions, with seven actresses portraying different moments in a woman's maturation: Soul Searcher, Voice, Single Mama, Dreamer Deferred, Motherless, Slow Drag and Bull Dagger. Life imitates art and vice versa, so the production will be infused with memes; it also will be filmed and later broadcast in a six episode web-series.

It's a monumental milestone for The Grand 1894 Opera House, celebrating 125 years and opening its 2019-2020 season with a big name legend performing legendary classics. Paul Anka will sing some of his own chart-toppers from his seven decade career, as well as classic hits from Ol' Blue Eyes in Paul Anka: Anka Sings Sinatra: His Songs, My Songs, My Way! He'll throw in some Tom Jones songs, too, but that's no reason to toss those undies onstage; some traditions are better left alone. Looking for a place to overnight? Start your journey at galveston.com. 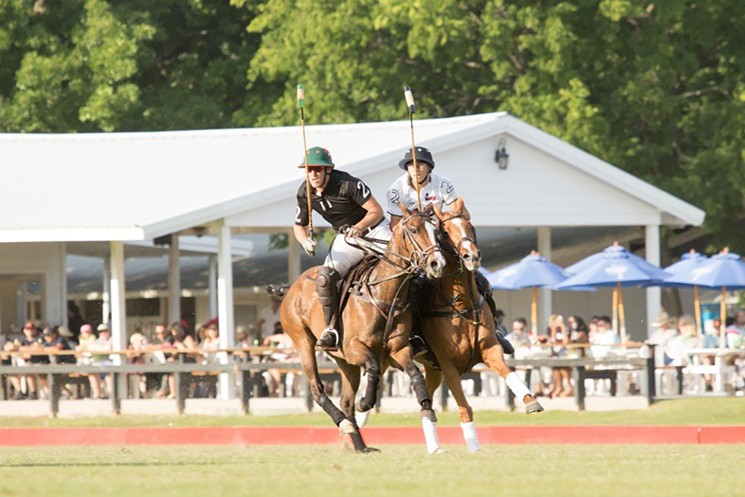 Nacho Figueras makes a special guest appearance this Sunday at the Houston Polo Club.
Photo by Kaylee Wroe
Our secret for getting the most out of a weekend is to plan something awesome for Sunday. The Houston Polo Club has arranged for live flamenco guitar music this Sunday, a nice tie-in for the International Cup presented by Lockton Companies. But it's not all formalities and highbrow at this team sport that dates back to the sixth century BC; in addition to a champagne divot stomp at halftime and a player parade, guests can take a ride on a pony hop. These equine inflatables are hilarious to watch and a chance to relive childhood joy for the riders. Look for a special guest appearance by Argentine polo player Ignacio "Nacho" Figueras, who is ranked as one of the top 100 polo players in the world and sometimes referred to as the "David Beckham of polo."

When it comes to the movers and shakers behind the Houston music scene, no list would be complete without Houston promoter/manager Mark C. Austin and SugarHill Recording Studios founder Josh Applebee. The talented duo launched Canned Acoustica back in 2010, letting audience members and musicians give back to the community. That concept has been revived in Unplugged at Discovery Green where the traditional tip jar has been replaced by an offering that benefit's the park's free music programming through the Discovery Green Conservancy. First up is Heights Funk Collective, Dem, Sherita Perez, Hustlers Brass Band and Roelant.

Funnyman Sean Patton doesn't mind being told he looks like an owl. He sees it himself every time he looks in the mirror. And really there's no downside, as he told audience members on his Conan O'Brien appearance: "First of all they sleep all day. That's awesome. I love doing that. They hang out in their tree at night; they're nocturnal. They have 20/10 vision which means they can see 90 seconds into the future, which is insane." Fans of late night television will also have caught Patton on The Tonight Show Starring Jimmy Fallon, Comedy Central or as Gus on Inside Amy Schumer. Now "Owl Boy" takes the stage at The Secret Group for two shows this Sunday.

With Andrew Luck's retirement, the Houston Texans actually have a shot at winning the AFC South, which means this could be an amazing year for football fans. Sure, there's just as much argument for the other side: That the only way to protest bad management is to sit this season out. But when it all comes down to it, here in Texas we love football and, with so few home games in a season, it's hard to resist the pull of tailgating, rabid fans, smiling cheerleaders and Toro the mascot. The first home game of the season is Houston Texans vs Jacksonville Jaguars, and it's Liberty White Out night presented by BHP.