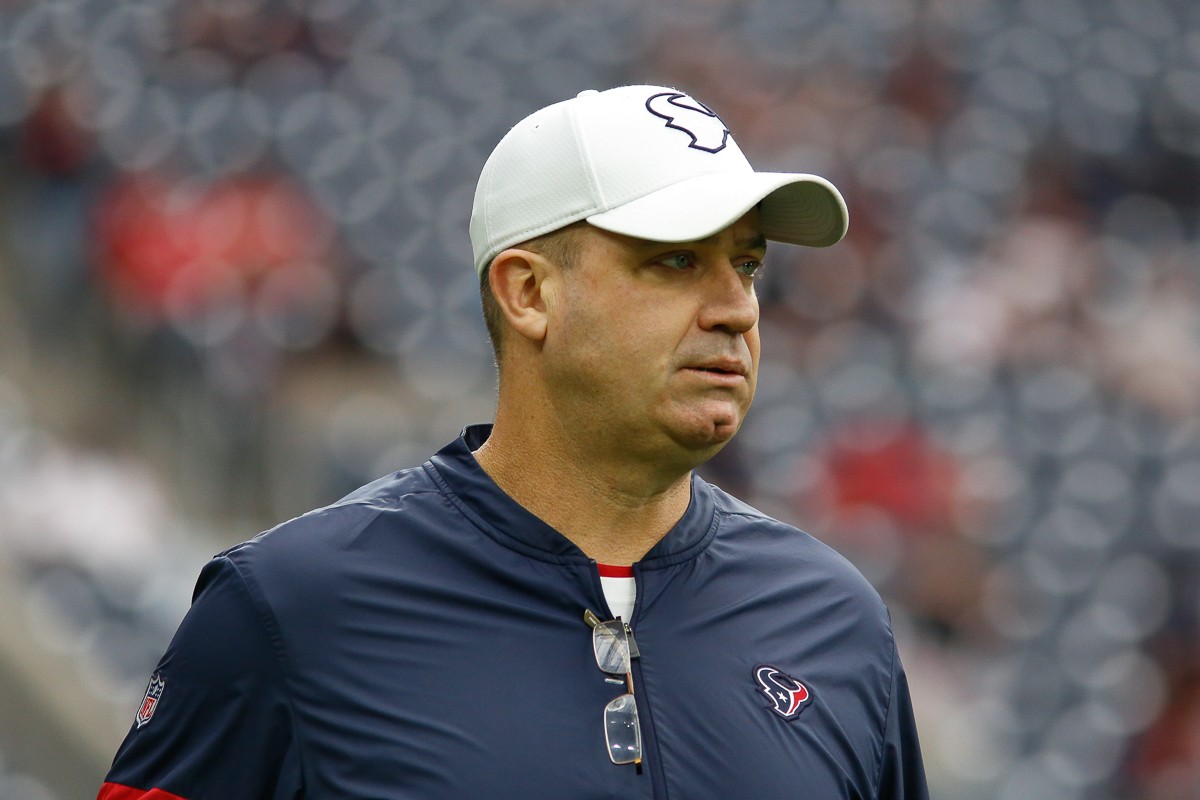 Photo by Eric Sauseda
Bill O'Brien had few answers on Sunday against Carolina, and the ones he did have were largely wrong.
As the host of the Houston Texans postgame show on SportsRadio 610, I feel like my sense of the pulse of Texans fans is especially acute, and even after a win last week over the Los Angeles Chargers, the most impressive road win of the Bill O'Brien Era, there was tempered excitement with some skepticism about O'Brien still sprinkled in.

Undoubtedly, yesterday, following the Texans follow up effort to that win over the Chargers, a 16-10 dud of a loss at home to the Kyle Allen-quarterbacked Carolina Panthers, the fan anger was boiling over again, to the point where it was hard to tell what people were more angry about — the loss to the Panthers or the fact that O'Brien had actually suckered some of them into thinking things were changing.

In 2018, the Texans went 11-5, largely on the strength of a nine-game wining streak that was littered with close shaves, inexplicable good fortune, and lost of bad opposing quarterbacks. Still, even amidst the success of winning football games, many fans were concerned, like the Texans were an economic bubble, like real estate or dot-coms,  ready to pop.

It turns out those people were right. Sunday's loss to the Panthers was your typical Texans game, where they either play up to their favored opponents' level or down to the level of their underdog opposition, and then things are ultimately decided by a couple throws and decisions by their head coach. If you're trying to win a Super Bowl, it's an untenable, terrifying, and on Sunday, infuriating place.

I have no idea what Bill O'Brien's message is to his team each week, I just know that he loves to hammer home how "the NFL is an 8-8 league." In other words, most games come down to a few plays, and that's the difference between, say, 5-11 and 11-5. So, it does make me wonder whether his team hears that and takes it to heart, and that's why it lets clearly inferior teams like Carolina yesterday, Jacksonville in Week 2, and the litany of other opposing teams in bad losses and way-too-close wins hang around. If a team hears over and over again from their head coach how "Hey, it's an 8-8 league, and it's just really tough to win, man," then doesn't it stand to reason that.... well, doesn't this Texans team play like this is what they hear every week?

It's an 8-8 league, and literally half the AFC is 2-2 through four games, and the Texans had a chance to stay above the fray on Sunday and move to 3-1 — the rest of the AFC South is all also 2-2 — but alas, they played like a team that hears how it's an 8-8 league. They played like an 8-8 team. And the O'Brien skepticism among fans overflows and boils over. Again.

Let's do some quick winners and losers:

4. Bryan Anger
Yeah, it was that kind of game — the damn punter is one of the winners! Anger just took over punting duties for the Texans a week ago, and on Sunday, after a first punt that was blocked and only traveled 19 yards, he boomed four more punts for a total of 236 yards, including a long of 71 yards (that was kind of a knuckle that rolled 25 yards, but still!). Texan special teams have not been to last year's near elite level this season, but they haven't been in the toilet either (like they were for every season of the O'Brien Era before 2018). Anger will hopefully be a catalyst for this team, because if every game is going to be a heart attack waiting to happen, field position is gonna matter.

3. Jadeveon Clowney
Hey, remember him? Clowney has been largely invisible in his first four games as a Seattle Seahawk, with a total of just five tackles in four games, and one sack (in which he basically ran Andy Dalton out of bounds behind the line of scrimmage, a box score anomaly if there ever was one). Yesterday, though, he finally made a game changing play with a pick six. He will need to do more to get the type of contract he is looking for this coming offseason, but this was a start.

I’m not sure how I missed this earlier, but Clowney had an awesome pick six today. @abc_columbia pic.twitter.com/GzzdCuwvVJ


2. Whitney Mercilus
Meanwhile, back here in Houston, Mercilus continues to have more impact as an edge rusher than Clowney ever had a a Houston Texan. On Sunday, he had his fourth straight game causing a turnover, this time with a strip sack and fumble that gave the Texans possession late in the second quarter (a possession squandered away by a ridiculous wide receiver pass call by O'Brien that resulted in a DeAndre Hopkins interception). Mercilus continues to do the types of things that will easily gain Pro Bowl recognition, if not some All Pro recognition.

1. Christian McCaffrey
If this were a game where the Texans' offense could have gotten out of first gear, then McCaffrey's performance would have been severely muted. He had 179 yards on the day,  but ti took him 37 touches to get there, so if the Texans had been able to score, say, even 21 or 24 points, the Panthers would have needed some explosive plays from their young running back to keep up. Instead, the mere fact that McCaffrey kept the ball moving forward, and kept moving the chains, was enough to make it feel like he was the best player on the field yesterday. Statistically, the Texans actually did a decent job on McCaffrey, but situationally, he ate them up at some of the worst possible times.

Kyle Allen was really effective in his Houston homecoming.
Photo by Eric Sauseda
4. Kevin Sumlin and Major Applewhite
There was a time when Kyle Allen was the top QB recruit in the country, and at that time, he chose to go to Texas A&M. However, that didn't work out, so he transferred to the University of Houston as a much ballyhooed future steward of the high powered Coog offense. That, too, didn't work out. Now, Allen is in the NFL, and he has skippered a 2-0 resurgence in Carolina, after they started the season 0-2 with Cam Newton under center. So I ask "What must Kevin Sumlin and Major Applewhite be thinking, and what must we be thinking about the two of them, Allen's two head coaches at the collegiate level?"

It was an uneven day for Deshaun Watson.
Photo by Eric Sauseda
3. Deshaun Watson
This was undoubtedly one of Watson's worst games as a pro, with no explosive plays downfield (he missed a couple deep balls to Will Fuller and Hopkins that killed the Texans chances in a close game), and several snaps where he looked flummoxed trying to make something happen. However, the most jarring thing may have been Watson's fumble on a strip sack la6e in the fourth quarter. Even in games where Watson has not been good, and there have been a few of those, but not many, he's managed to make enough plays to give the Texans a chance to win, and make up for some lost possessions earlier in the game with some plays late. This time, Watson's turnover essentially sealed the game for the Panthers. It was a strange day, indeed. The good news, Texan fans, is your QB is working hard to fix things....

Long after today’s game was over Deshaun Watson was on the field at NRG Stadium working on his game. pic.twitter.com/Xiwc1E7ORC


2. DeAndre Hopkins, pass thrower
Nothing was stranger, though, than O'Brien's play call with 2:31 to go in the half, with the game tied at 3-3, and the Texans moving the ball pretty easily for the first time all day, O'Brien decided to call this...

1. Bill O'Brien, game manager
The Hopkins play call was O'Brien's game management gaffe of the first half. In the second half, he challenged this third down catch by McCaffrey:

And this was O'Brien's explanation:


O'Brien on challenging the McCaffrey catch: "I felt like he caught the ball but that he slid and declared himself down to get the first down." pic.twitter.com/nEEPHqZSdl