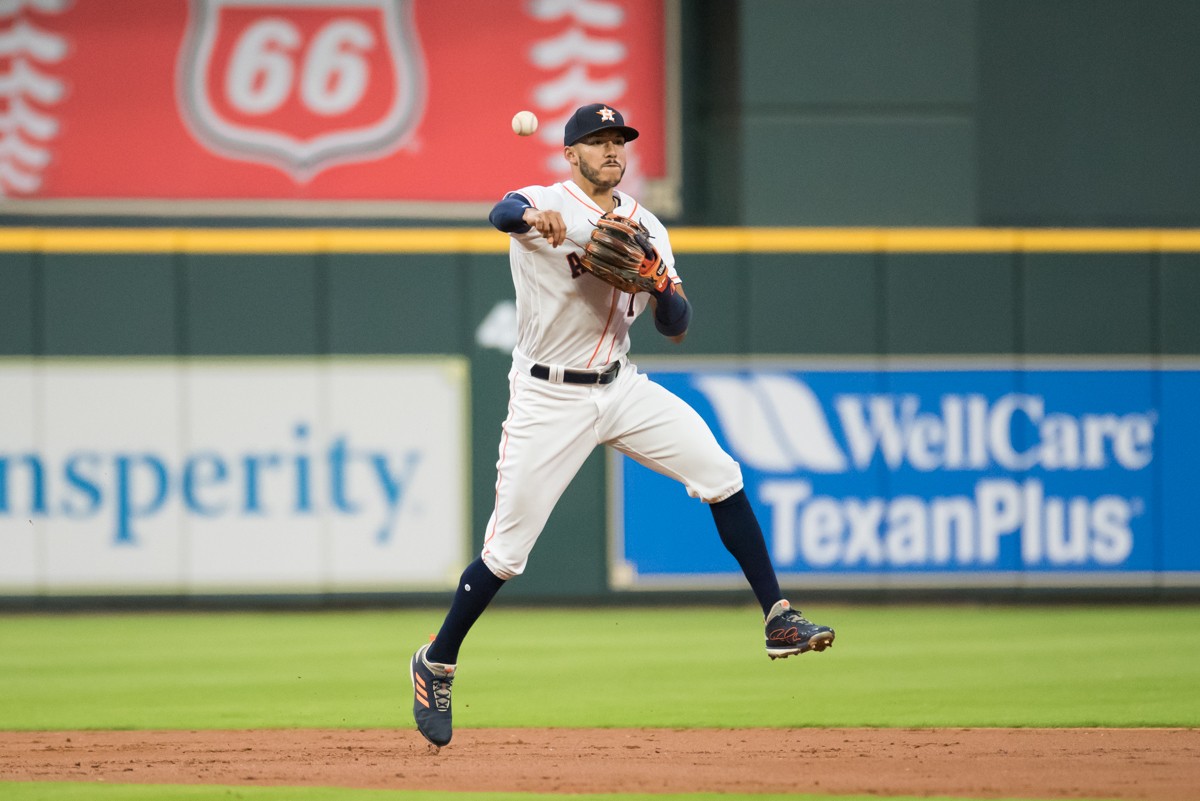 Photo by Jack Gorman
A healthy Carlos Correa gives the Astros an additional weapon in an already potent lineup.
The Tampa Bay Rays polished off the Oakland A's Wednesday night earning a trip to the American League Divisional Series in Houston. Their ace was none other than former Astros hero Charlie Morton, who became the first pitcher ever to win three win-or-go-home games in the playoffs.

The Astros have not been good against the Rays, particularly in Tampa. They went 3-4 against the Ray in 2019, but three of those were in the first week of the season when the Astros stumbled a bit out of the gate. Still, it's an intriguing early postseason matchup for both teams that begins with a businessman's special Friday at Minute Maid Park.

The Astros, and other Houston teams for that matter, have always liked to think of themselves as the underdogs. Even though we are the fourth (about to be third?) largest city in the country, there is a sense that we are overlooked and undervalued. That is no longer the case with this Astros club, which has one of the highest payrolls in baseball and was considered one of the favorites from the start of the season. The Rays, on the other hand, are the little payroll team that could in a tiny market in probably the third most popular city in their own state after Miami and Orlando.

You'll hear a lot about the David versus Goliath battle between big market, big payroll and little market, meager payroll. No doubt the Rays will use that as bulletin board material to get them fired up. In the end, it's about producing on the field and we'll see if that pays off for them or if the bigger monied Astros (as weird as that may sound) move on the ALCS.

Since joining the team, Yordan Alvarez has not only been a rookie phenom, he has solidified and bolstered an already potent Astros lineup. But the Rays feature a young power hitter of their own in outfielder Austin Meadows, only in his second season, but already an All Star. Meadows hit 33 homers with a slash line of .291/.364/.558/.922. Alvarez, in a smaller sample size — 313 at bats to 530 for Meadows — hit 27 homers and slashed .313/.412/.655/1.067. The two middle-lineup lefties could have significant impact on their respective teams' success.

Granted, Alvarez has quite a bit less pressure on him to perform than Meadows considering the Astros surround Alvarez with some of the best hitters in the game. But, we'll see how these two young players respond to the bright lights of the postseason.

There's not much to say about the Astros pitching. It features two no-doubt Hall of Famers and a third guy that could win the Cy Young, if one of those aforementioned HOF players doesn't get it. The Rays are a bit of a different story. Morton has been outstanding and continues to be the ace of their staff, but because he pitched Wednesday, the Astros won't see him before game three. Both Tyler Glasnow and Blake Snell are not expected to go deep into games due to injury limitations. That will leave a lot of pressure on the Rays bullpen, which has been one of the best in baseball, but rarely has to face the challenge inherent in the Astros lineup.

The one advantage might be the fact that Astros pitching tends to give up home runs and the Rays don't. The Astros bats tend to rely on power as do the Rays setting up what could be some interesting strategy. The key will be the Astros getting to Rays pitching early in the game and forcing long bullpen outings, putting pressure on the Rays in a short series.

On Wednesday, the Astros reported Correa had gone through all workouts and was ready to start on Friday with no pain or setbacks. It hasn't exactly been a lost season for the injured shortstop, but it hasn't been a great one either. Still, Correa's is yet another big bat in the middle of a lineup full of them. Even the threat of his presence in the lineup will put pressure on the Rays. And his defense in the field remains some of the best at his position in the AL.

Whatever Correa can give the Astros at the plate will be a bonus and one more thing for Rays pitching to worry about in a lineup that would terrify any pitcher.
California Privacy Policy California Collection Notice
Do Not Sell My Info
Use of this website constitutes acceptance of our terms of use, our cookies policy, and our privacy policy The Houston Press may earn a portion of sales from products & services purchased through links on our site from our affiliate partners. ©2022 Houston Press, LP. All rights reserved.