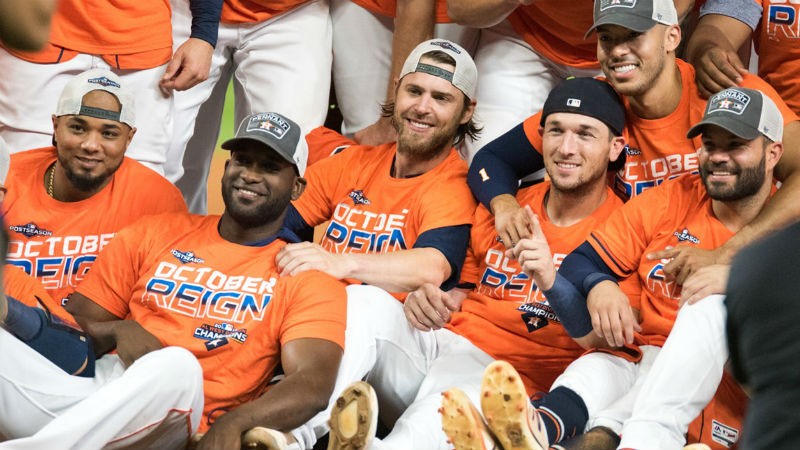 Photo by Jack Gorman
Time for celebration.
This afternoon, the Houston Astros begin in earnest their pursuit of a second World Series title in three years. There was a time ‘round these parts when that seemed impossible, so the chase is something to truly celebrate. As we all know, no celebration is complete without music, so here are tunes we feel would work as theme songs for the ‘stros 2019 playoff run, the ones we’d pick if owner Jim Crane or general manager Jeff Luhnow rang us asking for the perfect tunes to soundtrack the quest for baseball glory. We shelved tired selections like "We Will Rock You" and Icona Pop's "I Love It" (though there is a reference to that one in our choices) for songs that seem suited to the moment or have a little hometown flavor:

The Astros won a franchise record 107 games in the regular season and earned home field advantage for every round of 2019 playoff baseball. So, what song could be more fitting for the comfort and familiarity they’ve earned than “Home” by fellow home boys Blue October? Lines in the song about getting to soar and doing it all over again are inspirational and fitting and the tune is triumphant, perfect for an afternoon championship parade through downtown Houston.

Baseball's infamous East-West Coast bias resurfaces anytime the Yankees, Red Sox or Dodgers are suiting up in October. We're subjected to numb-skulled articles like a recent CBS Sports piece which had the Oakland A's leapfrogging past the Astros in the ALDS to ultimately challenge the Dodgers in the World Series (Dude, the A's once again failed to advance past the wild card game). Guess it'll take another Astros title for baseball pundits to heed Bun B and Pimp C and quit hatin’ the South.

Despite our 2017 World Series title, owning the best record in baseball this season and being home to the rightful owner of 2019’s AL MVP honors (we see you Alex Bregman!), the Astros once again begin their run at destiny with a non-primetime baseball game. Today’s first pitch is at 1:05 p.m. and my guess is it is going to be a nasty slider from Justin Verlander for a called strike. We all feel there’s something prestigious about our favorite team playing under the lights, so starting the playoffs with a day game feels a little disrespectful. Nevertheless, the Astros have played and won daytime post-season contests before, so here’s to doing it again, starting this afternoon. Go ahead and sing along to this yacht rock classic when the game’s over and the skyrockets are in flight.

Houston fans and their favorite team have been eager for the return to playoff baseball since last season’s playoff exit to eventual champs, the Boston Red Sox. We followed faithfully all year long, cheering old favorites like Carlos Correa, Yuli Gurriel and Josh Reddick and welcoming new additions like Michael Brantley and Zack Greinke. Manager A.J. Hinch guided these veterans slowly and steadily until they won the race for the best record in baseball. Now that the playoffs are here, we're ready to “Take It Back” and regain the honors of being baseball’s best. But as Hinch (and, yes, Cookie Monster) would suggest, we want it but we’ll wait. You too shouldn’t fast-forward to some imagined conclusion. Relax and enjoy every pitch, each on-the-edge-of-your-seat moment the Astros have become famous for (games 5 and 7 in the 2017 Series!). Our furry friend does his best Icona Pop impersonation on this tune and he could attest that the ultimate victory will taste much sweeter from savoring every delicious moment.

The first two lines of this classic rock gem are “We had a lot of luck on Venus, we always had a ball on Mars.” Just replace Venus and Mars with slightly-less foreign locales (NYC, L.A.) and this Deep Purple tune is suddenly about Space City’s baseball heroes traveling from stadium to stadium to kick asteroids and take names. There are even references to AL Rookie of the Year candidate Yordan Alvarez and Cy Young probable Gerrit Cole. True, they’re not specifically mentioned by name (the song is from 1972, nearly 20 years before either was born) but who else could Deep Purple be referencing when they’re singing of “moonshots” and “fireballs”?

2. “The Altuve Polka,” Polish Pete and the Polka? I Hardly Know Her Band

This homage to future Hall of Famer Jose Altuve was written and recorded by veteran Houston musicians in the throes of the 2017 championship run; so, not only is it a paean to a man we literally love, it’s also been battle-tested and proven. The song made its way onto ESPN and, as Houston Press’s Gladys Fuentes wrote when the song was first released, it’s rife with “contagious good feelings.”

Lizzo has written, rapped, sang, danced and fluted her way onto just about every “best of” music list in 2019. In our opinion, this unstoppable force of femme-powerment has also cornered the market on the best songs to power up the Astros’ playoff run. Pick practically anything from her breakthrough album Cuz I Love You and it works. The title track is how Houston sports fans feel about George Springer, Jake Marisnick and company. They play in Minute Maid Park, a.k.a. the “Juice Box,” so if you don’t like their winning ways, blame it on the “Juice,” to paraphrase Lizzo. Rays, Yankees, Dodgers, Braves – you’re all pretenders. Sorry but, as the L-to-the-Izzo says, “Truth Hurts.” When it comes to being champions, the ‘stros just took a DNA test, turns out they’re 100% that team.

If ever there was an omen, some sign to portend our second World Series title in three seasons, it’s that Lizzo is performing live in Houston at Revention Music Center tonight, mere hours after the good guys begin their playoff run. Tonight, we fully expect her to don the orange glow of an Astros jersey at some point during the show. She lived in Houston, spent formative years here and built some of her world-dominating sound from what she heard here. Sure, Minnesotans are going to claim her since she's also lived in the Twin Cities area and their team, the Twins, are active this postseason. But, c’mon. Only one team has the swagger to say it’s “Good As Hell” and prove in between the foul lines and that team is your Houston Astros.
California Privacy Policy California Collection Notice
Do Not Sell My Info
Use of this website constitutes acceptance of our terms of use, our cookies policy, and our privacy policy The Houston Press may earn a portion of sales from products & services purchased through links on our site from our affiliate partners. ©2022 Houston Press, LP. All rights reserved.