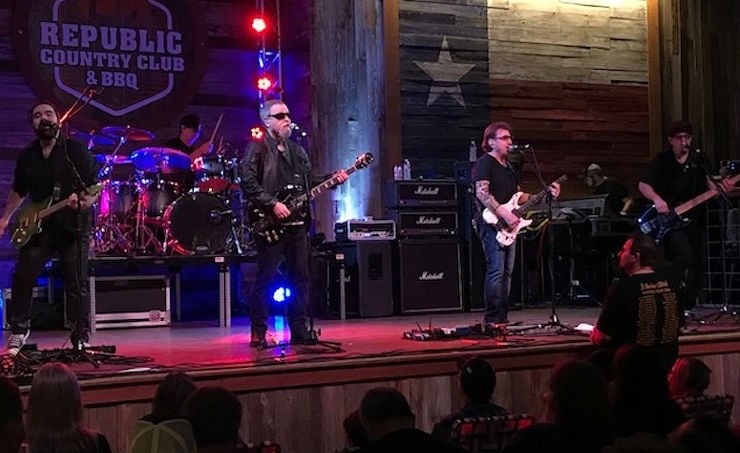 Generally speaking, cults end in one of two ways. They flame out, often with the followers committing mass suicide (Peoples Temple, Heaven’s Gate), or they exist long enough to become legitimized (any mainstream religion).

Exceptions do exist. Enter The Cult of the Blue Öyster, who have yet to disappear, with a core membership that’s remained (fairly) constant. And a brief heyday (mid-1970s to early ‘80s) aren’t quite enough to enshrine them alongside the other belief systems, but BÖC is still chugging along over 40 years after its origins in the arid wastelands of Long Island.

They were joined last night by even more venerable English rockers UFO, who opened the show at Stafford's Redneck Country Club. The RCC is a relatively new player in local live music, and it's a surprisingly snug venue, seating 500 in a mostly sports-themed area next to Republic BBQ.

It's a setting that actually fit UFO a little better, if we're being honest. They assume the role of bar band much more comfortably than BÖC, with straightforward rock songs about straightforward rock topics like getting girls. UFO doesn't have any songs co-written by Patti Smith (though they skipped "Career of Evil" last night) or penned by the guy who wrote the Elric novels.

UFO BBQ
Photo by Pete Vonder Haar
UFO opened with "Mother Mary." Anchored by founding members vocalist Phil Mogg and drummer Andy Parker, and longtime guitarist Vinnie Moore, whose virtuosity is almost enough to make you forget Michael Schenker. They ripped through cuts like "Love to Love You" and "Rock Bottom" and were tight as hell, even if Mogg described the RCC show as "the strangest gig we've ever played."

Moore expressed his support for the Astros, however. So they get a pass.

Blue Öyster Cult was next, and it was admittedly a bit weird to see them here. For those who remember the band's short stint as MTV darlings, it was a pleasant surprise encountering the band — including original members Donald "Buck Dharma" Roeser and Eric Bloom — in a more intimate setting, even if it seemed like an abbreviated performance.

Playing their biggest hit (“Burnin’ for You”) early on, and closing with their next biggest (“(Don’t Fear) The Reaper”), BÖC kept the pace moving. When they weren't showcasing Dharma's formidable guitar skills, that is. The man got a lot of solos, and between him and Moore, it was quite the conclave of axe-men.

And as I hinted at before, Blue Öyster Cult's music is a somewhat awkward fit for a venue like RCC (in fairness, Bloom did a good job shepherding the audience through the more obscure cuts). So even if the obvious transition from "The Vigil" to "E.T.I." (hint: it's aliens) was lost on the crowd, it wasn't the band's fault.

But I can still blame them for letting the crowd pick "Harvest Moon" over "Shooting Shark."

UFO and BÖC came to Stafford last night and put on fine sets. Were the Cult's efforts a little "wanky" in the solo department? Perhaps. Is the 71 year-old Mogg still annoying slender? Absolutely.

Personal Bias: After last night, I want to look up more UFO music. I also wonder what happened to my 1986 BÖC tour shirt, bought for me by an older friend because my uncool parents wouldn't let their 15-year old son attend out-of-town concerts.

The Crowd: Veterans of a thousand Bud Light wars.

Overheard In The Crowd: "I saw these guys before anyone knew what an 'oyster' was."

What's not to love?
Photo by Pete Vonder Haar
UFO SETLIST
Mother Mary
We Belong to the Night
Venus
Lights Out
Burn Your House Down
Only You Can Rock Me
Cherry
Love to Love
Too Hot to Handle
Rock Bottom
Doctor Doctor

ENCORE
Tattoo Vampire
Hot Rails to Hell
Cities on Flame With Rock and Roll
California Privacy Policy California Collection Notice
Do Not Sell My Info
Use of this website constitutes acceptance of our terms of use, our cookies policy, and our privacy policy The Houston Press may earn a portion of sales from products & services purchased through links on our site from our affiliate partners. ©2022 Houston Press, LP. All rights reserved.