Mendocino Farms, 609 Main, will open in Downtown Houston November 7. This will make the third location in the Houston area for the California-based sandwich and salad restaurant. The most recent opened in Uptown Park October 3.

The concept was created in 2003 by husband and wife Mario Del Pero and Ellen Chen. The couple opened the first unit in 2005 in Los Angeles. The Rice Village store, which opened this past July, was the first Houston location and the first foray outside of California. Obviously, Texas is a great choice for the upscale sandwich restaurant because there are plans for two more in Houston next year and also one slated for downtown Dallas.

The Pachamama Cubano is a seasonal fall special at Mendocino Farms.
Photo by Erica Allen
The menu offers plenty of healthy choices with lots of vegetables and fresh ingredients including the vegan and gluten-free Healthiest Side Salad Ever with raw beet, ginger and carrot salad with kale, black rice, golden raisins, toasted hazelnuts and oranges. There is also an entire vegan portion of the menu.

For those who prefer  more substantial sandwiches, there are choices such as Prosciutto and Chicken, Mendo's Fried Chicken Sandwich, a banh mi and an Italian hoagie. Soups and entree salads round out the menu. On the beverage side, there are Puck's All Natural Fountain Sodas, organic milk and beer and wine.

Mendocino Farms at Uptown Park Boulevard, will celebrate November 3 at 11 a.m. The first 113 customers will receive a free sandwich for dine-in, no purchase necessary. There will also be balloon decorations a spinwheel for "Mendo" swag and and Instagram campaign giveaway.

District 7, 15375 Memorial has opened softly. A grand opening celebration is planned for November 5 and 6 with complimentary wine, beer and bar bites from 4 p.m. to 8 p.m. This makes restaurant number eight for the restaurant brand's co-owners Babak and Shelley Elham who opened the first restaurant in 2003.

The urban American cuisine includes small plates such as crawfish hushpuppies and wings, plus an oyster bar. There are charcuterie and bruschetta boards and entree choices such as maple-seared salmon, blackened redfish, paella, burgers and pizza.

The restaurant is open seven days a week for lunch and dinner and there is a weekend brunch. The brunch menu offers omelets, eggs Benedict, chicken and waffles, shrimp and grits and taco plates. There is a full service bar and a large patio and lounge area which is family and pet-friendly. The comfortable seating outdoors makes for a great spot to play games and sip a boozy brunch cocktail


El Real, 1201 Westheimer, has closed indefinitely according to a press release. The Tex-Mex hotspot from celebrity chef Bryan Caswell, business partner Bill Floyd and former Houston Press food critic and cookbook author Robb Walsh opened in 2011. Floyd and Caswell parted ways last year and Floyd has a pending lawsuit against Caswell claiming he is owed money from the restaurant, according to Eater Houston. A number of employees have also alleged that the restaurant owes them back wages after their paychecks bounced.

The closing of the Montrose restaurant follows the recent reopening of Caswell's first restaurant REEF, which suffered major damage and flooding from Hurricane Harvey in August 2017. It took nearly two years for Caswell's critically-acclaimed seafood restaurant to open its doors again and it has been slow going. Right after the restaurant's reopening, it was announced that Caswell and his wife, Jennifer Caswell, were divorcing. She had been part of the business and the duo were touted as a Houston power couple. However, there have been other problems such as their home being struck by lightning in July 2018. The couple also parted ways with Le Meridien in January 2018, only four months after opening Oxbow 7, a restaurant at the hotel which was very much a Caswell-influenced concept. It has also shuttered.

Caswell's business concern is now focused on REEF and the adjoining 3rd Bar. His divorce is still on-going and his personal focus is on his family and his health, as he stated in a press release regarding the closure.

Decatur Bar and Pop Up has closed.
Photo by Trish Badger

Decatur Bar and Pop Up Factory, 2310 Decatur, closed October 31 with a last hurrah and drink specials meant to clear out the booze. The concept was innovative, but in a highly competitive dining scene such as Houston's, it never wholly defined itself. It began in January 2019 as a space to showcase rotating chefs-in-residence and its first chef was the very talented and experienced Evelyn Garcia. Unfortunately, she was also its last. Both Garcia and Taco Tuesday pop up chef, Victoria Elizondo, will launch concepts at the upcoming Politan Row. Garcia will be featuring her Thai cuisine at Kin and Elizondo will be opening a Mexican restaurant, Cochinita and Co.

Owner Adam Brackman has transferred some of the staff to his bar Axelrad while offering others financial support as they transition to new jobs. He will be marketing the property soon.

Beer and ice cream will be your new favorite pairing.
Photo by Shawn Chippendale

Sweet Bribery, 250 W. 19th, is now serving wine and beer to pair with its artisanal ice cream and pastries. The beers on tap include Guinness, 8th Wonder's Rocket Fuel, Blue Moon White plus Austin's East Ciders' Honey Cider. There will also be sparkling, red, white and rose wines to pair with pastry chef Sharon Leonard's whoopie pies and Fruity Pebble Krispy Treats. There is a beer and ice cream flight which pairs each tap offering with a frozen mini scoop of ice cream or sorbet.

Wood-fired coffee is coming to Katy.
Photo by Steven Stone

Summer Moon, 19901 Kingsland Boulevard, will open in Katy this November. The family-owned business began in Austin in 2002 and has now expanded to multiple locations around Austin, San Antonio and other central Texas towns, with the Katy store being the first in the Houston area. The organic, arabica coffee beans are handcrafted and roasted in a brick roaster with Texas oak.

Its proprietary "Moon Milk" is made of all natural unrefined sugar with hints of spice and is used in its Whole Moon, Half Moon and Quarter Moon lattes. There is a variety of hot and cold coffee drinks plus pastries and snacks that vary depending on location.

KM Realty, a company that manages smaller, un-anchored shopping centers operates the KIngsland Plaza center near Cinco Ranch. Its director, Steven Stone, says, " Summer Moon will be a boon to Kingsland Plaza and our portfolio of tenants."

Ryan Richardson, a native of Katy, is the Houston licensee.

Masraff's, 1753 Post Oak, will relocate to the Memorial City area in May 2020, according to Houston Business Journal. The fine dining steak house is leaving the Galleria after nearly a decade, once the lease ends in April 2020. Owner Russell Masraff cites the construction (oh, the construction) in the Post Oak area and the ever-increasing competition in the upscale dining scene for the move. Masraff feels the new location will fill a need for a steakhouse in the area. The new spot will be smaller with 15 tables in the dining room and two private dining rooms that can seat quite a few more guests. There will also be a 15-foot tall wine tower as a statement piece.

The menu will be primarily the same with its steaks, wild game and fresh seafood. However, there will be a few additions and a rotating, seasonal menu as well. 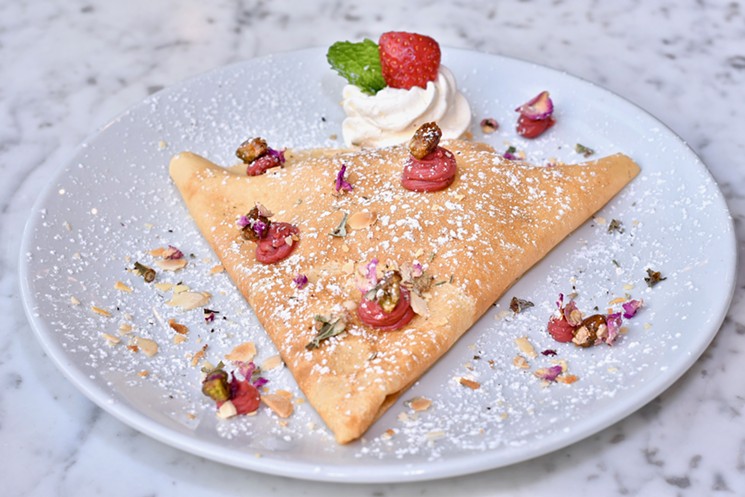 Sweet Paris Creperie and Cafe, 2701 Drexel, is collaborating with Annie Rupani of Cacao and Cardamom to create two exquisite crepes to benefit The Houston Food Bank. The specials crepes will be available the entire month of November and each purchase will create enough funds to buy a child a meal. Guests can try the Buttered Chicken Tikka Masala, a crepe filled with juicy chicken breast, topped with a classic masala and served with a tangy carrot-beet chutney and yogurt sauce. On the sweet side, there's the Pistachio Rose Crepe with white chocolate granache, cardamom and rosewater. It's garnished with pistachio praline and caramelized pistachios.

Decatur Bar and Pop Up Factory, 2310 Decatur
El Real, 1201 Westheimer
Houston's, 5888 Westheimer, closed October 13
Mala Sichuan, Finn Hall, 712 Main, closed early October
California Privacy Policy California Collection Notice
Do Not Sell My Info
Use of this website constitutes acceptance of our terms of use, our cookies policy, and our privacy policy The Houston Press may earn a portion of sales from products & services purchased through links on our site from our affiliate partners. ©2022 Houston Press, LP. All rights reserved.