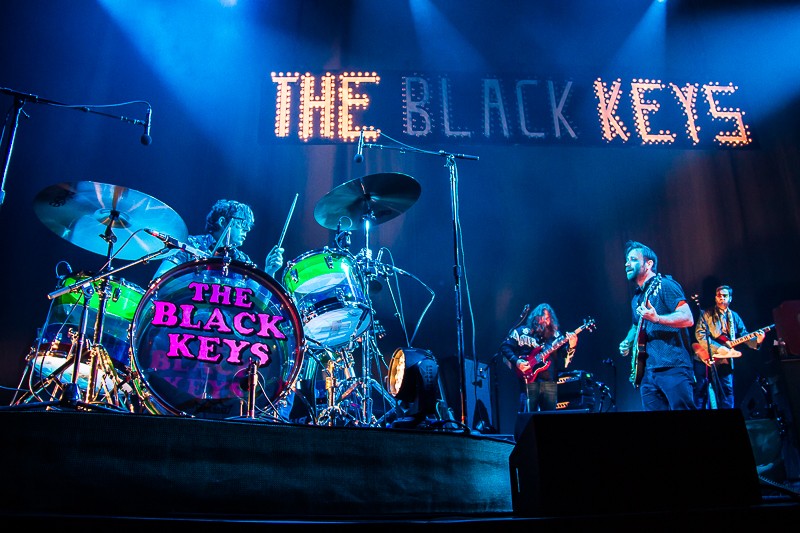 After a three-year hiatus between their final show in 2015 and their return to the studio in 2018, drummer Patrick Carney began having a recurring nightmare in which he and guitarist Dan Auerbach forgot to rehearse and couldn't remember any of their songs.

Fortunately, dreams don't always come to fruition. And in the case of The Black Keys, the opposite might actually be true: They may sound better now than they ever have. Unfortunately, their Houston fanbase just didn't seem to care very much during the group's latest visit.

On tour in support of their ninth studio album and first in five years, the Ohio-born blues rock duo performed at a comfortably packed Toyota Center on Tuesday night, boasting a set list that reached all the way back to their sophomore effort, 2003's Thickfreakness.

The band kicked off their performance with a track from 2008's Attack & Release before launching into two tracks from their latest record, "Let's Rock" - "Eagle Birds" and "Tell Me Lies." And so the night went, with Carney and Auerbach bouncing around their extensive catalog for the better part of 90 minutes.

Save for the opener, "I Got Mine," The Black Keys buried most of the deep cuts in the middle of their set. The likes of "10 A.M. Automatic" and "Your Touch" weren't as well received as the likes of "Howlin' For You" and "Lonely Boy," but Carney and Auerbach kept rocking through it all, fan reaction be damned.

And thankfully so, because the crowd was especially subdued for such a large venue. At one point during the evening, a woman behind me demanded my wife and I sit down so she could see the stage better. I gestured toward the group standing in front of us, indicating that our view would be blocked if we sat down, and the woman scoffed at me before scooting into an empty seat to her left.

Maybe it was the frigid temperatures outside or the fact that it was a school night, but fans just didn't seem very interested in partying with The Black Keys. Instead, most of them were content to sit quietly in their seats and politely clap in between songs, standing only for the hits and sitting back down as soon as they ended.

Which was a real shame because, as the title of their most recent effort indicates, The Black Keys came to Houston to rock. Supported by a quartet of backup musicians, Carney and Auerbach treated the crowd to a plethora of hits, a handful of deep cuts and some solid new music, only to be meagerly received by their fanbase.

So it wasn't the nightmare Carney had, but the reception his band received on Tuesday night wasn't the stuff dreams are made of either.

SET LIST
I Got Mine
Eagle Birds
Tell Me Lies
Gold On The Ceiling
Fever
Next Girl
Fire Walk With Me
Walk Across The Water
Everlasting Light
Howlin' For You
10 A.M. Automatic
Your Touch
Strange Times
Tighten Up
Thickfreakness
Ten Cent Pistol
Little Black Submarines
Lonely Boy