Reviews For The Easily Distracted:
Knives Out 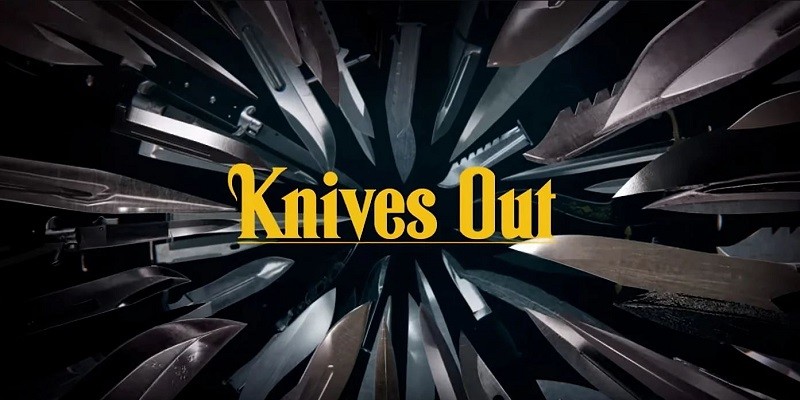 Describe This Movie In One Plan 9 From Outer Space Quote:

LT. HARPER: One thing's sure: Inspector Clay is dead — murdered — and somebody's responsible!

Rating Using Random Objects Relevant To The Film: 4 Mr. Creosotes out of 5.

Universal Pictures
Tagline: "Everyone has a motive. No one has a clue."

Not So Brief Plot Synopsis: Wealthy writer Harlan Thrombey (Christopher Plummer) is found dead the morning after his 85th birthday. Though initially ruled a suicide, private investigator Benoit Blanc (Daniel Craig) — hired by persons unknown — suspects foul play. Enlisting Thrombey's nurse and confidante Marta (Ana de Armas) as his assistant, Blanc questions Thrombey's family. And it turns out each and every one had a reason to bump off the old man.

"Critical" Analysis: Knives Out is a throwback to the whodunits of yore, recalling the ensemble films based on the works of Agatha Christie and Rex Stout, with one notable exception: it's not really a mystery.

Lionsgate is certainly marketing it as one, but the riddle at the center of the film is solved for the audience early on, meaning Knives Out is less a "whodunit" than a "howdunit," and then a "whydunuit." And it totally doesn't matter: the movie is a delight, and certainly a high point of the genre (though if you want a more traditional mystery, Johnson's Brick is probably a better choice).

Writer/director Rian Johnson's last movie was something called The Last Jedi, a trifle of a film which made little impact at the box office and generated no online reaction whatsoever. It therefore makes sense that he'd want to try his hand at something more character-driven, and he's assembled quite the murderer's row for this purpose (pun intended).

Michael Shannon and Jamie Lee Curtis are excellent as Thrombey's two surviving children, Walt and Linda. Walt runs dad's publishing company, but isn't allowed to make key decisions. Linda, on the other hand, is successful in her own right, but her husband Richard (Don Johnson) had a bone of his own to pick with Harlan. Toni Collette is ably vacuous as Joni, widow of Harlan's other son, with grandkids Katherine Langford and Jaeden Martell rounding out the family.

But it's Crai, Ana de Armas, and Chris Evans — as Linda and Richard's son Ransom, who becomes an unlikely ally of Marta's — who really shine. Both are clearly enjoying shedding their more iconic reputations as 007 and America's Ass, respectively (in Evans's case, to portray a real ass).

Craig's Benoit Blanc, dubbed as "the last of the gentleman sleuths" and portrayed as Sherlock Holmes by way of Colonel Shuffle, really stands out. His chicken-friend demeanor lulls the Thrombeys into complacency, setting them up for his (mostly) brilliant elucidation. And he does a Southern accent better than most American actors. He should star in a Gator remake after he's done with Bond.

Johnson also uses modern political hot buttons to tarnish certain characters, which is mostly unnecessary. Richard loudly (and erroneously) praising Marta's family for emigrating to the U.S. "the right way" while others describing her as "part of the family" highlights their hypocrisy, but honestly, they're unsympathetic enough as it is.

And almost as if anticipating the inevitable comparisons, Johnson essentially lampshades similarities to Clue and Blanc's resemblance to a certain British detective (he frequently refers to Marta as "Watson"). This isn't as obnoxious as it sounds, and is probably inevitable given how alike these movies are.

Long on caustic banter and genre tropes — if short on genuine mystery — Knives Out is a lot of fun, and actually wouldn't be a bad choice for a family holiday movie trip. Assuming your family is as capable of murder as most, that is.
California Privacy Policy California Collection Notice
Do Not Sell My Info
Use of this website constitutes acceptance of our terms of use, our cookies policy, and our privacy policy The Houston Press may earn a portion of sales from products & services purchased through links on our site from our affiliate partners. ©2022 Houston Press, LP. All rights reserved.