Photo by Marco Torres
From hard hitting tracks to songs of heartbreak, Bad Bunny's range was on full display at Toyota Center.


It may seem that most music fans these days are only interested in "turning up" and "getting lit", but deep down, sometimes they just need a hug.

Bad Bunny's primary genre of choice is the boombastic, thumping, hyper-sexual sounds of reggaeton. But what makes him special, and yes... different, are the liberties he takes with his emotions, expressing them in his songs and fashion. 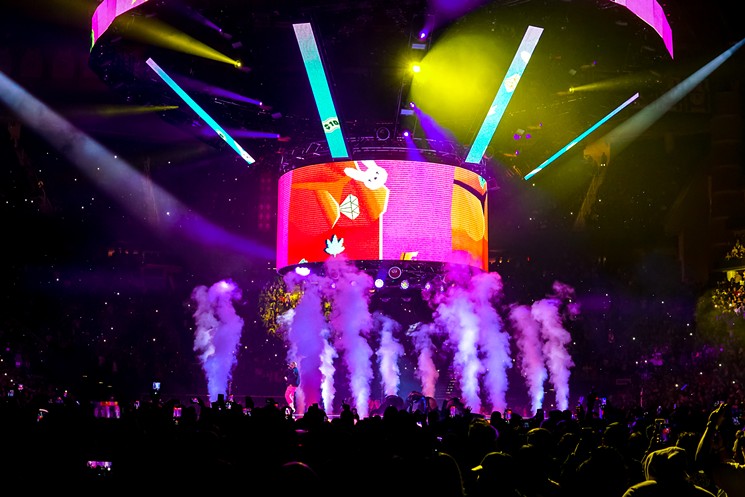 The stage was positioned in the center of the venue, which provided a more intimate experience to all the Bad Bunny fans.
Photo by Marco Torres
Dressed in pink, wearing a black face mask (as he likes to do) and with intense energy, Bad Bunny hit the stage with the ferocity of a hurricane Sunday night at Toyota Center. The fans greeted him eagerly with loud and sustained cheers after a long Thanksgiving weekend.

The stage was positioned at mid-court of the basketball arena, and was brilliant with neon lights and LED screens, flanked by occasional pyrotechnics and bursts of fireworks. The screens featured everything from water-scapes, fast cars, sunsets, and of course, the Bad Bunny rabbit logo.

The audience was also provided a wristband that lit up as each song bumped from one beat to the other. It was truly a marvel to see the lights all dance in unison, seemingly in tune with Bad Bunny's every word and heartbeat.

After an opening trio of jams from his debut album X100Pre, the mood softened with the inspirational track "Estamos Bien", which Bad Bunny has previously dedicated to his people of Puerto Rico and their ongoing recovery after Hurricane Maria devastated the island territory in 2017 (shortly after Hurricane Harvey hit Houston). 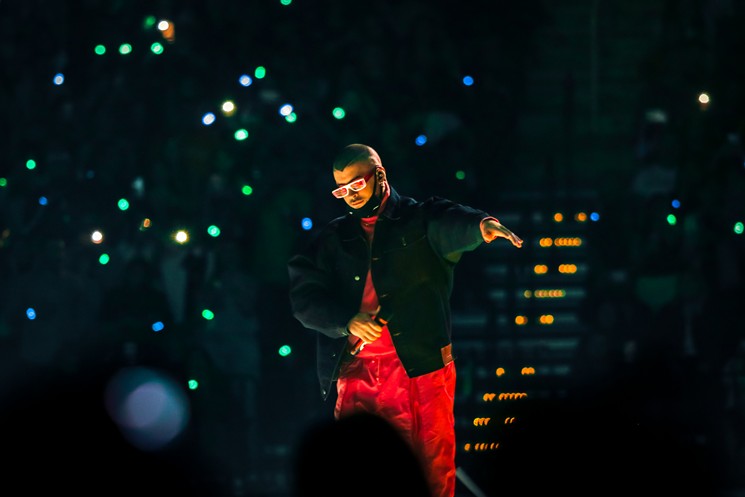 The combination of sensual singing and sexual party tracks makes Bad Bunny accessible to a wide range of fans, as was evident by the diverse crowd in the stands at the show. The audience was definitely mostly Latino, but some wore Yeezys while others wore Louboutins, a mix of hypebeast and high fashion. 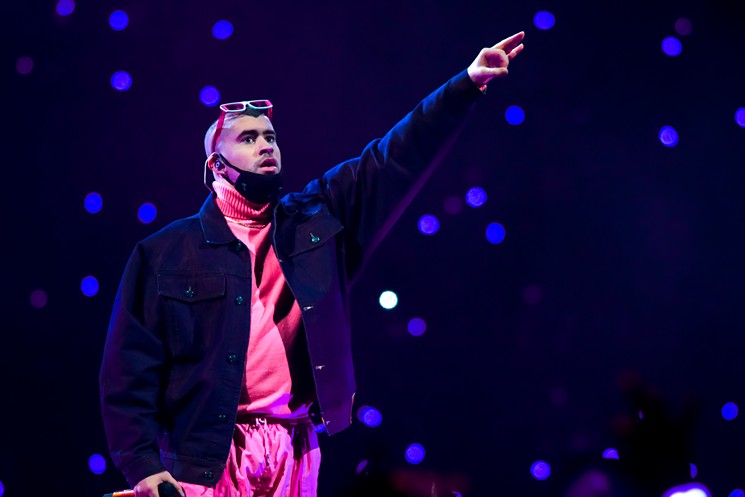 At the young age of 25, Bad Bunny has already cemented himself as one of the most popular artists on the worldwide music charts.
Photo by Marco Torres
Mostly though, Bad Bunny provides a vibe of acceptance and happiness, and he thanked his fans on multiple occasions throughout the evening.

"Even if we don't know each other personally" he told the crowd in Spanish, "I feel like we are all united and are one big family."

Bad Bunny is only 25 years old, and although his career is still young, he seems poised to be in the forefront of music and culture for many years to come. His genre hopping and smart collaborations keep him at the top of the charts, and many look to him for inspiration.

As long as "El Conejo Malo" continues to dazzle us like he did last night at Toyota center, we will be a Bad Bunny fan por siempre.
California Privacy Policy California Collection Notice
Do Not Sell My Info
Use of this website constitutes acceptance of our terms of use, our cookies policy, and our privacy policy The Houston Press may earn a portion of sales from products & services purchased through links on our site from our affiliate partners. ©2022 Houston Press, LP. All rights reserved.