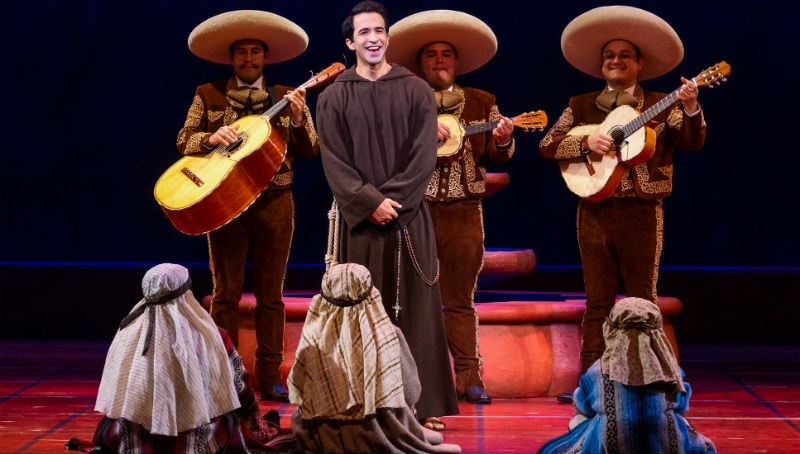 Photo by Lynn Lane
Rafael Moras(center) as Father Matias sings to the children at the pastorela rehearsal.
The show curtain for Houston Grand Opera's world premiere of Javier Martinez (music) and Leonard Foglia's (libretto) El Milagro del Recuerdo (“The Miracle of Remembering”) is everything you'd want for a prelude.

Depicting a Mexican folk pastorela (the Nativity pageant), it's painted in vivid, vibrant colors like a Mayan temple relief, exquisitely detailed, alive with intricate figures and animals, bursting with life, crowded with atmosphere. The work on stage, once revealed behind this startling tapestry, is fragile as a piñata.

Milagro is a prequel to HGO's wildly successful “mariachi opera,” Cruzar la Cara de la Luna (2010) – the world's first, I believe – composed by Martinez' father José “Pepe” Martinez, the maestro of mariachi, with book by Foglia. Cruzar's gone international since its premiere, a huge hit for HGO, struggling for many seasons to produce a money-making operatic Christmas show that could rival ballet's The Nutcracker or theater's A Christmas Carol. There have been many misses, but the mariachi idea took hold, and now there are two of them. Next holiday season, perhaps, the opera should pair the father/son duo in a single production, since each is one-act and complement without much overlap.

Of course, that's a lot of mariachi for staid opera patrons, what with the whistles and whoops heard from the opening night attendees who were partying way before the curtain went up. They were stoked, and the mood was infectious.

Sadly, Milagro disappoints. Not in its music, which in various scenes is jubilant and festive, tenderly fragrant, or downright irresistible. Composer Javier is a worthy successor to his father, no doubt about that. We'd dance in the aisles if the ushers would let us. Not in its singing, which is first-class. Nor in its clever mise-en-scene, by Neil Patel, which constantly transfigures a plaza's archways into many intimate spaces. But because the story is paper-thin.

This is the first time in a long time at the theater when I wished the show would be longer. Not because it's so engrossing, but because there's not much to it. There's no depth, complication, or drama except on the surface. Every character has a problem, there's a song about it, and then the show's over. Where's the rest of it!

Migrant worker Laurentino (sturdy bass Daniel Novola) surprises his family at Christmas when he returns from the U.S. to his small town Michoacán, Mexico, home to migrating monarch butterflies. (Butterflies are a constant leitmotif in both Cruzar and Milagro). Strong and steadfast wife Renata (strong and steadfast soprano Cecelia Duarte) wants him to stay home permanently. “Remember your family” is the dominant leitmotif.

Everyone has familial problems. The priest (ardent tenor Rafael Moras) rues his decision to give up worldly life. Grandpa Aba (scene-stealing baritone Hector Vasquez) never had the courage to leave town, and wonders what his parents, who died when he was an infant during the Revolution, would think of him now. Laurentino's best bud, Chucho (premiere mariachi singer Miguel de Aranda), is hopped up to take his family to the United States even though he knows he'll be on the lowest social rung. His wife Lupita (internationally renowned mariachi singer Vanessa Alonzo) wants to be “An American Girl,” one of the freshest numbers in Milagro, a mariachi version of West Side Story's “America.” So, everybody sings what they regret or desire, the show moves on, but we never get to know them. Renata is the only one with any soul or depth. She's the unfulfilled heart of Milagro, and this should have been her story.

Martinez' music is animated, romantic (“Remember It”), soulful (“You're the Window” and “Us”), invariably pleasing, just not dramatically convincing. The family theme is front and center – you can't miss it – but the rhythmic mariachi overlay softens the impact and lessens our sympathy. I think that's why Renata stands out as if etched by acid. She's the only real person in this “opera.” Brittle, opinionated, rock-ribbed, there's so much below the surface, we want more of her.

Instead of a mariachi band, Milagro uses an orchestra of violins, violas, cello, harp, and trumpets, enthusiastically conducted by David Hanlon. This is augmented by a trio of classic mariachi guitars: acoustic, guitarrón (bass guitar) and a vihuela (five-stringed guitar), exceptionally played and sung by San Antonio's Trio Chapultepec (Vincent Pequeño, William Carlton Galvez, Israel Alcala). They are omnipresent throughout, ghost-like in some scenes or striding up to the footlights to dazzle with their virtuosity. I wish more had been made of them.

There were quite a few audience members who had never been to an opera before, and if this mariachi Christmas offering from HGO stirs them to attend future theater of whatever kind, I'm all for it!

El Milagro del Recuerdo continues through December 22 at 7 p.m. Thursdays through Saturdays; and 2:30 p.m. on Saturdays and Sundays at the Wortham Theater, 500 Texas. Sung in Spanish with projected English translation. For information, call 713-228-6737 or visit houstongrandopera.org. $30-$107.