Say Hi, How Are You To Houston's New Mural Honoring Daniel Johnston 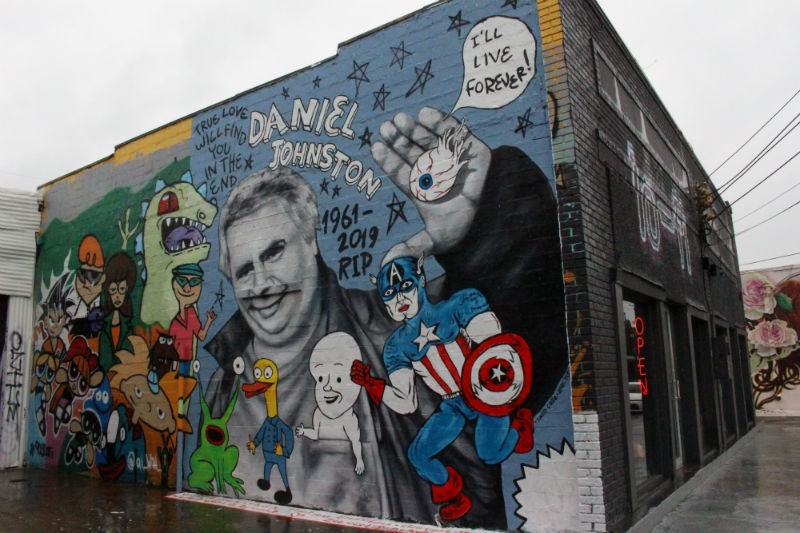 
Houston now has its own mural recognizing the late singer-songwriter and visual artist Daniel Johnston, known for his "Hi, How Are You" greetings.

As part of the annual Hi, How Are You day, people everywhere on Wednesday remembered Johnston. The day — held each year on his birthday —  celebrates Johnston’s life and ever-growing legacy. In Houston, Johnston’s family, friends and fans gathered at noon Wednesday for the official unveiling of a new mural which honors this essential Texas artist.

Titled “Love Found You In The End,” the mural was designed and created by preeminent Houston muralist Anat Ronen and fellow artist Jacob Calle. It’s located at Lo-Fo Vintage, 1629 Westheimer. Margie Johnston, Daniel’s sister, was on hand for the reveal and said the mural’s location is fitting.

“The name of this is Lo-Fi, that’s the name of the store, and he was like a pioneer of lo-fi (music),” she noted.

He was indeed. Johnston hardly needs an introduction to music fans, particularly those in this part of the world. Home-taped recordings of his gentle and poignant songs set a blueprint for D.I.Y. and alternative cultures to follow. Fans included everyone from Kurt Cobain to Lana Del Ray and all sorts in between. His “Hi, How Are You,” mural in Austin is one of the city’s cultural landmarks. Followers from across the globe trek to it for selfies and photos. The 2006 documentary, The Devil and Daniel Johnston, emphasized the artist’s struggles with mental illness. His openness on the subject created a dialogue for many others.

The crowd that gathered in Houston on a rainy afternoon to eat birthday cake and drink Mountain Dew – a Johnston favorite – knew the man and his impact and shared some thoughts.

Jeff Reese was Johnston’s caregiver for the last two years of his life. He’s a former mental health officer and met Johnston at an art show.

“The whole thing with ‘Hi, How Are You’ is he didn’t meet a stranger, he would talk to anybody,” Reese said. “With mental health issues, there’s a stigmatism involved. With Daniel there was no stigmatism to anything, you know? There were no filters on Daniel a lot of times, which is a good thing.”

Reese said that allowed Johnston to connect with a variety of people.

“Speaking for me, not for the family, not for Margie, but the love that Daniel had was just amazing. The fact that it would help somebody else to be able to recognize what’s going on with a person – a lot of times you can live next door to someone and not realize what’s going on with them. They could be suffering, they could be having a lot of problems. And to just go out and tell somebody, ‘Hi, how are you?’ breaks that wall down. Even though Dan’s not here anymore, his legacy lives on and he will live forever.”

Calle is so earnest a fan he once held a Daniel Johnston show at his home. He said the mural took about 10 hours to paint but he hopes it’ll be a long lasting tribute.

“My mom passed away in 2017, she was cremated, and I never really had a place to go to see my mom, a place to visit. Even though Dan is buried in Katy, people may not know that, but they can see this wall and it can be a place they can visit to pay respects and say hello to Dan.”

In fact, the mural depicts Johnston in what seems to be a beckoning act, as if he’s literally hailing passersby over. It’s also a reminder that Johnston, whose formative years as an artist were spent in Austin, has Houston connections.

Family, friends and fans at the mural's official unveiling
Photo by Jacob Calle

“I’ve been a fan of Daniel’s since the early ‘90s and in 2006 I worked with my old theater company to create a rock opera from Daniel’s songs and artwork, a mythology, and I’ve sort of been working on his story ever since, off and on,” said Jason Nodler. “Daniel has roots here, he moved down to Houston in 1983 to live with his brother, Dick, and then shortly after that moved out to San Marcos with Margie and from there wound up in Austin.”

Nodler is a founder of The Catastrophic Theater and his rock opera, Speeding Motorcycle, is one of the theater’s best-loved works. It had a recent smash run at MATCH. Nodler said Houston artists connect with Johnston’s aesthetic.

“Houston is big D.I.Y. town and sort of always has been. Daniel sort of invented that. Our theater is an emotional theater, it’s not an intellectual theater, it’s a theater of feelings and Daniel is the gold standard when it comes to emotional art.”

Of the mural, Nodler said, “Hopefully, like with so many things to do with Daniel, someone will walk by and see it and be taken with it and they’re gonna dive deep.”

Margie Johnston said it’s been gratifying to see her brother’s genius hailed by people everywhere, but especially in Houston.

“I think there were several events that made people more aware of Dan, one of them was Speeding Motorcycle and then he had his 50th birthday party at Fitzgerald’s and that got a lot of attention. His documentary movie was at the River Oaks Theatre and a lot of people became aware of him that way, he attended the opening of it.

“He just continues to get fans wherever he goes,” she said, speaking in a present tense which suggests, rightly so, that Johnston lives on. “When I would take him to a thrift store, pretty soon every employee was a fan. He made friends everywhere. Fans will sprout up any place that Dan’s been.”
California Privacy Policy California Collection Notice
Do Not Sell My Info
Use of this website constitutes acceptance of our terms of use, our cookies policy, and our privacy policy The Houston Press may earn a portion of sales from products & services purchased through links on our site from our affiliate partners. ©2022 Houston Press, LP. All rights reserved.