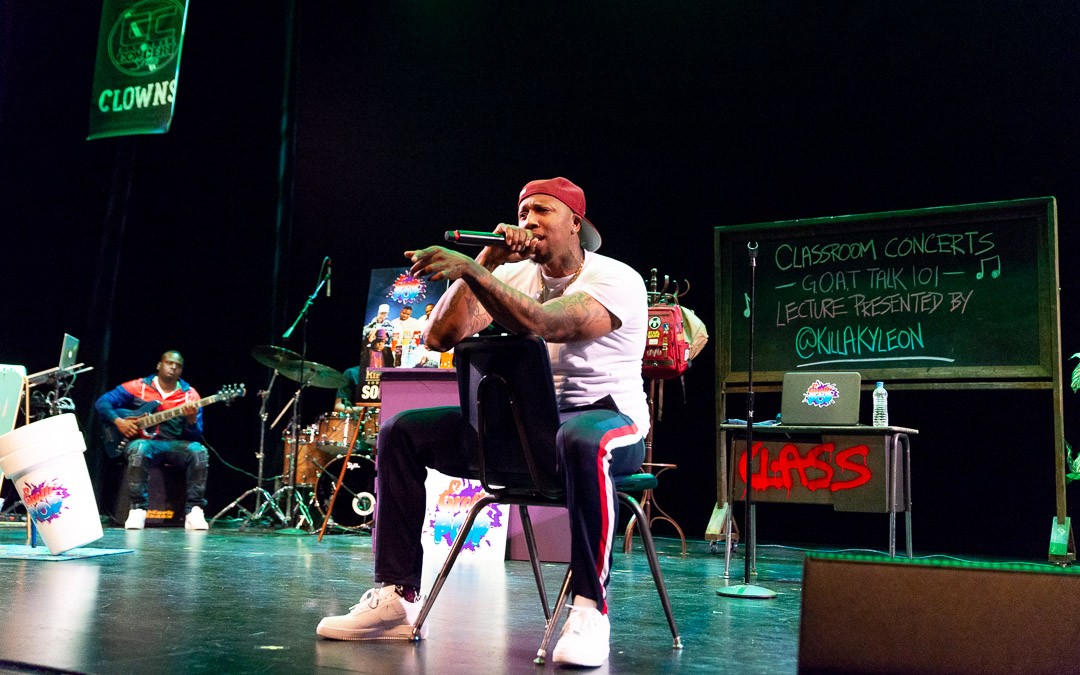 Photo by Jennifer Lake
Kill Kyleon sits down to rap a lesson to the audience.
The line was out the door Thursday night at the Midtown Arts & Theater Center as eager faces awaited admission to the newest installment of the Classroom Concert Series. In this fifth episode of the series led by Jeremy Sims and Rezzin Pullum, up-and-coming artists Dende, GP45 , and Dedoe warmed up the crowd before Houston legend Killa Kyleon took the stage.

“Y'all are all the classmates," explained Sims. “We got the band up here, The Class Clowns, and in a few moments, we're going to have some guys up here to teach y’all a thing or two.”

Complete with graffiti covered desks, chalkboards, a rack of backpacks, and a podium, the stage was transformed into a classroom. Props of games, laptops and giant Styrofoam cups displaying the night’s sponsor Exotic Pop were trickled around the stage to fully give off a schoolhouse feel.

Houston rapper/singer/producer Dende started the evening with his “Senzu 101” lecture. Dende’s name derives from the Japanese anime TV show Dragonball Z. The character Dende, as well as the mythical Senzu Bean, are healers, and Dende views himself as a healer via his music. Beginning with the track “TakeItFromMe” from his February release ME?, the artist relaxed his “classmates” with his encapsulating singing voice. Dende was all smiles as he sang and danced around the stage with his carefree presence. Next, bringing out friend and collaborator Lilly Aviana to perform the duet “Armory,” the two kept the soulful mood alive while they ended the song with a vocal duel, testing the other's range. 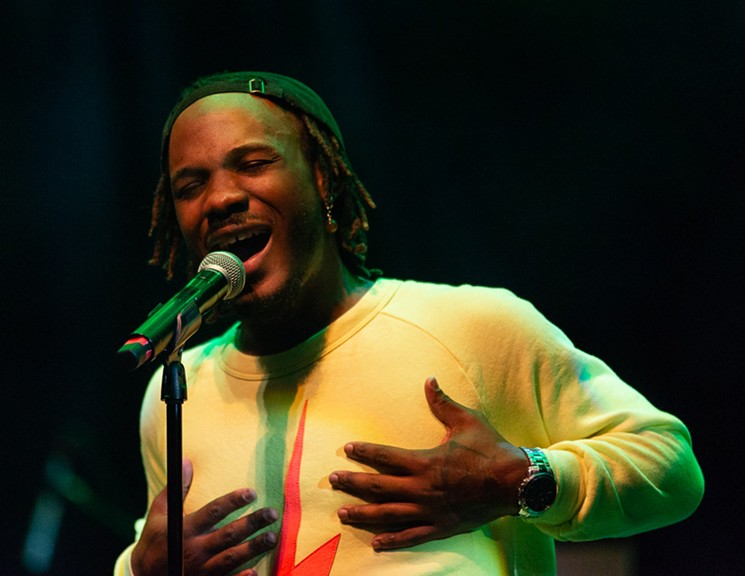 Dende sings his heart out at the Classroom Concert Series.
Photo by Jennifer Lake
“All right, I’m going to rap a little on this next one if that’s OK with you?” asked Dende to the classmates who returned an uproar of applause.

Between each song the artist took time to gives his “lecture” on the meaning or creation of the song, explaining how his song and the music videos are each metaphors in their own way. Finishing his set with “Road,” Dende stood at the podium as he picked up the pace to spit his personal and in-depth song about his path and journey to where he is today as well as the things he’s lost to get there.

After the conclusion of Dende’s set, the curtains were drawn shut for a brief moment but quickly reopened to a new stage setup. With a long lunchroom table in the center of the stage and a small countertop with a lunchlady, the two rappers, GP 4/5 and Dedoe, found themselves in “Lunch Detention.” Starting with a tabletop, fist and pencil beat, the artists began to freestyle but were interrupted by their “teacher” Sims and the “janitor” Pops. After a spat with the teacher, rapper Dedoe rose from table to perform his latest single “Let Me In” but was instructed to “sit back down” afterward. After a speech from Pops, GP 4/5 had his chance to prove his worth as he performed an a capella freestyle to win over the “adults.”

Rapper GP 4/5 and his double cup.
Photo by Jennifer Lake
With the curtain closed again for the next stage setup, the time was occupied with a freestyle battle between audience members for a chance at some free merch. From Nacogdoches to Galveston, enthusiastic attendees jumped at the chance to show off their skills.

Lastly the curtain opened to Killa Kyleon seated at the desktop with his feet propped up.

“I was a badass in school so I think ima just sit here for a min while we get started.” Explained Killa as he began his G.O.A.T. 101 lesson.

Clad in a tracksuit and sporting a gold chain with a golden goat head, representing his “greatest-of-all-Texas” title. The Houston MC went though some of his most thought provoking, non-traditional songs, hoping to reach the audience and teach them.

“I could have hit y’all with a lot of different shit tonight,” tells Killa, “but the fact that this is called the Classroom Concert Series, I had to show you my intelligent side.”

Intelligence and music flow effortlessly through Killa, as was made clear when the keyboardist's equipment accidentally became unplugged and the seasoned rapper found the opportunity to conduct the rest of the band in a jam session during which he began to freestyle over while the keyplayer's laptop booted back up.

Pulling up his chair to the front of the stage, turning it around backward and taking seat in what might be known as the universal “I’m about to explain something to you so pay attention” position, Killa finished off his set by dedicating “Toast For The Real” to Nipsey Hussle and moving to the podium to tell a quick story of how his brother influenced him to get into the music industry at a young age. 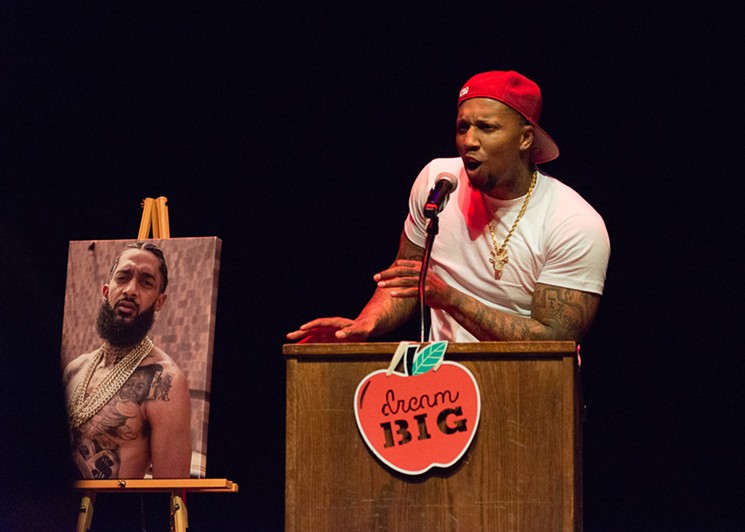 Killa Kyleon tells a story before exiting the stage.
Photo by Jennifer Lake
With a unique twist on live performances the night’s concert was a refreshing change of pace from the average gigs that you might find yourself at from time to time. Looking forward to the next installment and its surprises.
California Privacy Policy California Collection Notice
Do Not Sell My Info
Use of this website constitutes acceptance of our terms of use, our cookies policy, and our privacy policy The Houston Press may earn a portion of sales from products & services purchased through links on our site from our affiliate partners. ©2022 Houston Press, LP. All rights reserved.