Rock Hall EDU online graphic
So, are you a Music teacher and need to keep students engaged and learning during the current pandemic-based shutdown of schools? Or a harried Gen X parent with a musical bent trying to keep your toddlers, tweens, and teens occupied? Or just a rock and roll fan looking for a cool new online learning experience?

Let me introduce you to the Rock and Roll Hall of Fame’s program, Rock Hall EDU. The free, online platform brings together rock music and education in a unique and convenient way to make you the hippest parent or teacher in cyberspace.

“We can reach far more people with a digital platform, and be able to use all the great content that we have,” says Rock Hall President/CEO Greg Harris of the program that launched last September. 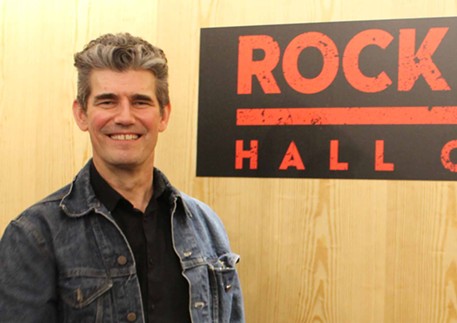 Rock Hall President/CEO Greg Harris
Photo by Bob Ruggiero
“With all these schools now doing remote learning and distance education because of the events of the last few weeks, we’re putting more emphasis on the program. And we have people working a lot to create new content right now, people who would normally be teaching at the Hall or cataloging archives.” The Rock and Roll Hall of Fame itself in Cleveland, Ohio is closed at least through March 27.

The Hall’s education program began a few years ago with more modest aims. Instructors would often teach a class via video conferencing. The Hall also did (and still does) invite school groups to the facility for concerts and classes, hosting about 50,000 students annually.

“It was designed for teachers in classes, but parents and students themselves can use it as well. Even just a fan can use it for self-study,” Harris says.

A children's writing and art exercise based on the Beatles' "Yellow Submarine."
Rock Hall EDU graphic
Virtual Students can see a drumming demonstration from E Street thumper Max Weinberg or watch Beastie Boys’ collaborator DJ Hurricane show how he uses "scratching." You can watch Joan Baez, Graham Nash, and Jackson Browne perform songs with themes under the banner of music and social activism/civil rights. Rock Hall EDU has introduced themes, like a section focusing on female songwriters and performers for Women’s History Month.

Other timelines and content focus on individual Hall inductee artists or genres like, the Motown Sound. For the younger set, there writing and art assignments based around “Yellow Submarine” or rock and roll-themed letter learning. Harris says that because of recent events, they are revving things up to add more new content more quickly, given that staff are all working from home. He says they’re digging deep into the Hall’s vast reservoir of artifacts and videos, as well as creating new online-only educational elements.


“Everything our education staff does with this aligns with standards for public schools here in Ohio and many other states. They are educators with a huge passion for music,” Harris says. He also clarifies that these are not music lessons as in teaching anyone to play guitar or write a song.

The current featured exhibit on Rock Hall EDU focuses on the lives and music of the Beatles, with multi-media rabbit holes about their history, songwriting, influence, development, and of course – music.

What’s going to appeal to a second grader, of course, won’t to a high school junior. So Rock Hall EDU strives to cover all age groups and educational levels, sprung from a pilot program that involved active teachers in the school system.

Students can learn about the intersection of music and the struggle for civil rights in the U.S.
Rock Hall EDU online graphic
“Younger students might just want to learn what rhythm is or writing something, while older students can learn about social issues and how musicians [addressed] those, rock and roll as the voice of freedom and how music can motivate people,” Harris says. “You can see Bob Dylan, Joan Baez, and Mahalia Jackson performing at Martin Luther King Jr.’s March on Washington, and how that’s very similar to what Chuck D and the Prophets of Rage are doing today.”

And with 40,000 artifacts and over a million documents in their overall archive, its seems that Rock Hall EDU will never run out of new content. Though hopefully, they’ll only get through a small fraction of them before the world returns to normal.

“We hope this helps students and teachers all over the country,” Harris sums up. “And parents!”