“What was really a shame is I actually went to this Ramones/Runaways show and they took my camera. They wouldn’t let me come in and take photographs but luckily for me I went down the street and I stopped at a convenience store, a 7-Eleven and it turns out that the band likes to stop— and I don’t know if you knew this or not, but Johnny Ramone has to have milk and glazed, powdered donuts after a show,” says Kidd.

“So he stopped for that and it was just an accident that I stopped and then this van drives up and he lets the Ramones out and they are all just milling about trying to buy something before they go down the road. And I said is it okay if I take your picture so I got some pictures of them. But there are other shows that I actually went to and I took pictures of the band playing on stage and I went backstage and took photographs as well.”

Kidd says the band was down to earth and not standoffish whatsoever.

“No they were very friendly I had to laugh because on the picture of Joey somebody said he looked really like he didn’t want—they were very talkative, they were very cool, they were all very nice to me. And I feel like I asked permission so they could have said no. But they didn’t and Monte came over, their road manager and he goes hey man and he gave me this little baseball bat it said “Beat on the Brat” on it.

“Beat on the Brat” was a song the Ramones recorded on their first album, but of course you already know that. Kidd still has the bat given to him to this day along with the photos he took that night which he now shares with us. 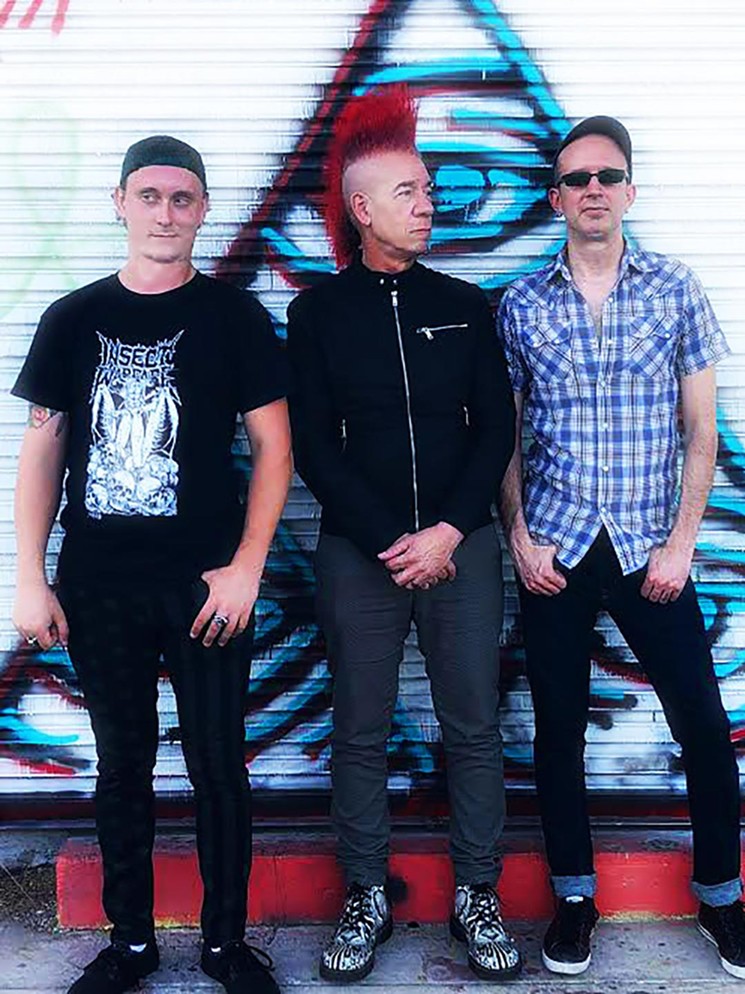 The current Hates lineup (L-R) Will Cheadle, Christian Kidd, David Ensminger.
Photo by Alexis Kidd
Kidd, 64, formed The Hates back 41 years ago, having played in his three previous punk bands, Zyklon B, Guyana Boys Choir, and Christian Oppression; Kidd has always been a fan of music but punk inspired him to make his own for the first time.

“I think it was just more of a change. I can remember when I grew up with my mother, she worked at a record store and she brought home Elvis Presley records and then Little Richard and then The Beatles so I think it was more like I liked music.  I wasn’t looking at it from a musician’s standpoint. And then other things came along in the '70s like glam, like David Bowie and I just went to concerts and the psychedelic music started happening as well.

"I went to Pink Floyd but this was just still me being interested in music as a fan,” says Kidd. “When punk rock came along I guess it was kind of a two-fold thing I decided I wanted to pick up playing the guitar and at the same time it made it accessible and not only that I didn’t think about just playing the guitar I thought about putting a band together, playing live, and writing music.”

Most of us were too young or not even born yet during the early days of punk; so what was it like in the early Houston punk scene?

“The thing that I like to emphasize is there was no such thing as the internet;  there wasn’t a network. And for us to put a punk band together then you were going up against wanting to play the venues that pretty much had cover bands and that’s exactly what happened,” explains Kidd. “I was very fortunate because a friend of mine worked at Bellaire Cable Television so he put us on the air and at the same time a club owner came down to listen to us play and he said you guys got the gig but you’re also going to have to play an hours’ worth of Eagles covers.”

“Around that time people were really into Crosby Stills Nash and Young, just all this California cowboy country kind of music. They were into The Band and Bob Dylan and that kind of stuff. They thought we were just supposed to turn around and mimic doing that kind of stuff. No way, you know. I could see their point they’ve got to bring people in they’ve got to make money but I felt I was altruistic right off the bat; I didn’t care about making money I cared about doing my art, I wanted to do what I believed in.” 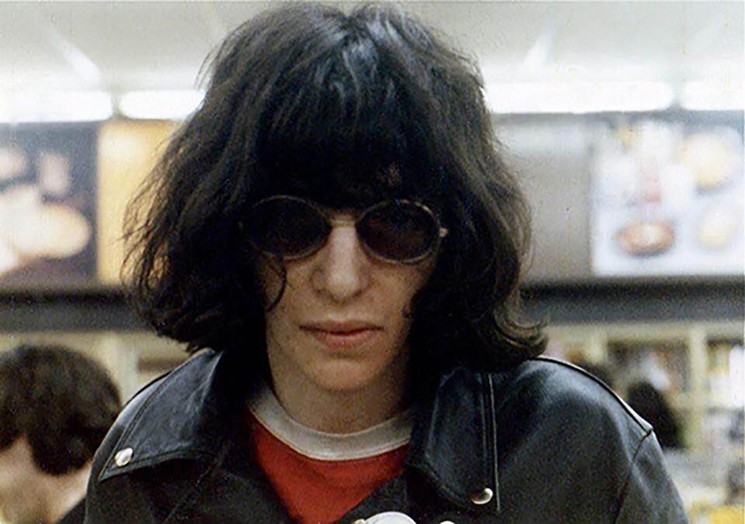 Joey Ramone at a Houston 7-Eleven store on February 19, 1978.
Photo by Christian Kidd
The club Kidd is referring to was known as The Island aka Rock Island aka Paradise Island that was located on 4700 Main from 1979 to 1983 and was also a Mexican Restaurant by day.

“The owner guy Phil Hicks who wanted to have the place as a live venue, he wanted cover bands and ironically for him the place was a dump and he put cover bands in there and nobody would come. And we would bring people in. And then that led to other bands forming like Really Red, Legionaire's Disease, AK-47, Plastic Idols, and Sperm Whale. I guess it’s kind of like when you have a place for someone to play it will give people incentive to want to do something,” explains Kidd.

“And he hated the idea that people thought of it as a punk club even after he started getting people to come in there then he dropped those bands and still tried to bring in cover bands again and it wouldn’t work. He had to resort back to having us local bands go on in there to bring out a crowd. It even irked him when he’d have a national touring band come in there and we could open up for them and bring all our people in and then they’d leave and not stick around for the headliner.”

Like much of the country, the early punk scene had room for more different kinds of sounds and styles then what we think of as punk rock today.

“The thing about the early punk bands was they really didn’t have a look and a sound yet. And really some bands kind of I guess when you’d hear the recordings you’d say well they’re not punk per se the way you kind of hear bands like The Ramones and The Sex Pistols some bands were a lot more psychedelic and stuff like that,” says Kidd.

“We’re talking about the '70s when you got into the '80s then I felt like you had hardcore punk bands and you had people like skinheads coming in and starting fights and things like that. That was much later. So I think that’s why I really enjoyed the earlier kind of scene more. When we started there’d be bands that came from California and they were like Devo. You’d have R.E.M coming to town and they’d play there, so you could see there were bands that just weren’t, you know everybody just used that umbrella to call it punk but you wouldn’t consider that punk rock.”

The Sex Pistols at Randy's Rodeo in San Antonio on January 8, 1978
Photo by Christian Kidd
The first Hates record featured Robert Kainer on bass and Glenn Sorvisto on drums; they were both in high school and after graduation Kainer moved to Austin to go to college and Sorvisto moved to San Francisco to see if he could make it big in a band out west. He actually asked Kidd to go with him and start The Hates out there. Kidd declined.

“I love it being here in Houston I thought it was like being a big fish in a small pond and over there I felt like it was just punk bands were dime a dozen. I really felt like why can’t Houston have a music scene, why can’t it have its own record labels and magazines and all that stuff? Why can’t it have its own individuality why do we always feel like we have to go to Nashville or New York City or whatever to make it big?”

Throughout the years The Hates have had a revolving door of people coming and going with Kidd being the one constant; the current lineup features (Houston Press contributor) David Ensminger on drums and Will Cheadle on bass. The band usually plays one or two live shows a month but the coronavirus obviously threw a monkey wrench into those plans as it has for millions of people around the world. Kidd has been playing some live acoustic shows on The Hates Facebook page so follow that for some cool punk home entertainment.

In addition to seeing The Ramones live multiple times, Kidd was lucky enough to see many other legendary proto-punk and punk bands live in Houston such as The New York Dolls, Split Enz, Deaf School, and The Dead Boys among a ton of others. He even got to drive out to San Antonio to see The Sex Pistols perform a show at Randy's Rodeo on January 8, 1978; The Sex Pistols never played Houston on their first tour but they did play Dallas the following night. A band with a lot of buzz played San Antonio and Dallas but not Houston. The more things change the more they stay the same.

Christian Kidd was originally named Christian Arnheiter and he changed his stage name to Christian Oppression when he was in that band; when he married his wife Alexis Kidd 7 years ago he took her last name. That is so cool and sweet and it has a nice ring to it as a bonus. 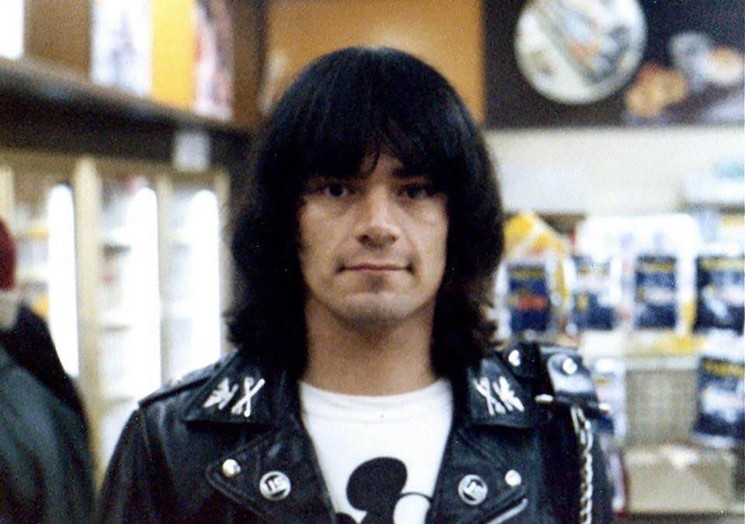 Dee Dee Ramone at a Houston 7-Eleven store on February 19, 1978.
Photo by Christian Kidd
Speaking of sweet, Kidd writes love poems to his wife on his Facebook page every day.

“When she was working at Global I would write her poems every day and I’d even bring her flowers so the husbands of the other employees said you better stop doing that you’re making it hard on us,” Kidd says. “When she was diagnosed with mesothelioma she had amassed 300 poems I had written her but they did not keep her position open so those poems were all lost on her computer at work which they erased. So I felt I would write her poems now and that would be a way of them not being destroyed.”

A poem every day to your wife is real dedication guys; Kidd is also obviously still dedicated to his music after all these years.

“There’s always someone who comes up and says this is my first time seeing you play so that’s always very gratifying. I just enjoy doing it. I don’t want to sound selfish but I would have to say it’s more about me just really enjoying playing,” says Kidd. “It’s really cathartic for me just to go practice. It goes back to what I told you earlier it has to be me doing what I really believe in doing so it has nothing to do with getting paid to do the gig or not. I’m still having fun doing this; I’m still very excited to be doing this.”

Let’s send out positive vibes that we all get through what we are all going through now and get to go see a live Hates gig as soon as it’s safely possible. 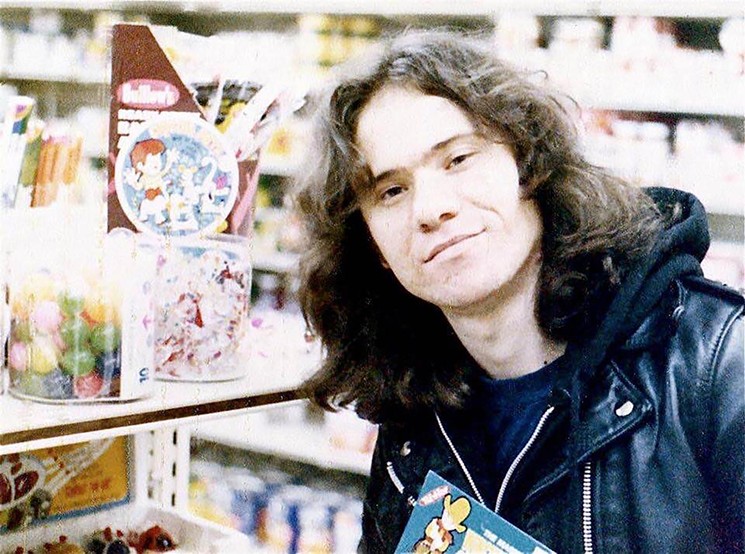 Tommy Ramone at a Houston 7-Eleven store on February 19, 1978.
Photo by Christian Kidd
California Privacy Policy California Collection Notice
Do Not Sell My Info
Use of this website constitutes acceptance of our terms of use, our cookies policy, and our privacy policy The Houston Press may earn a portion of sales from products & services purchased through links on our site from our affiliate partners. ©2022 Houston Press, LP. All rights reserved.