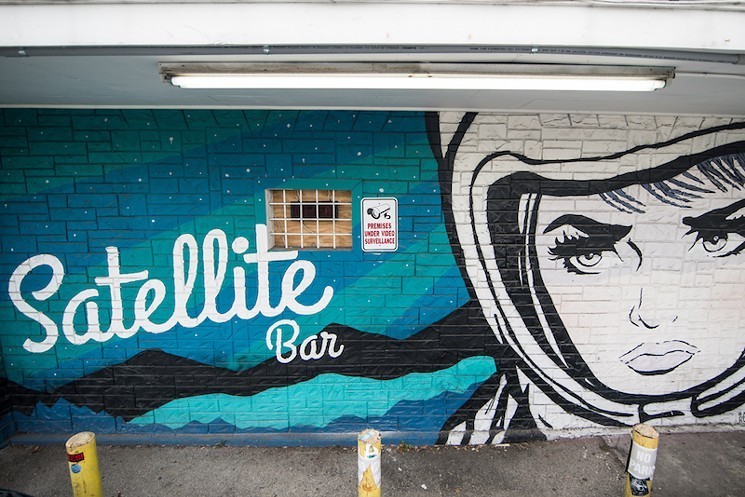 Photo by Jack Gorman
Houston's little East-End dive is doing what they can to keep the show going on.
As COVID-19 wreaks havoc on small businesses throughout the city, forcing a mass stream of layoffs and shuttering of operations, business owners of all forms are dreaming up different ways to mitigate these losses in any way they can. Whether it’s rolling out gift card specials for restaurants, or curbside pickup for independent grocers, owners are doing whatever they can to earn enough to support their employees, or in many cases, keep the doors open.

For those in the music industry, however, it’s quickly coming to light just how few options exist. Though artists have done their best to keep fans engaged through livestreams and merch deals, while brick-and-mortar record stores have made their collections available online, it’s obvious that a music industry without live entertainment isn’t financially sustainable—a reality that’s tough to accept for music venues.

In fact it’s hard to argue that any small business has been/will be affected more by this virus than our city’s venues. Not only are there very few ways to supplement income for live music, but even when restrictions are lifted and human interaction is once again deemed safe, there’s no telling how long it’ll take for concert-goers to once again become comfortable with the idea of cramming shoulder to shoulder in a small room.

Satellite Houston (formerly Satellite Bar), the little East End dive that has quickly become one of the city’s most beloved beacons for live music, is currently experiencing just how devastating this halt to operations has become. In response, the venue has launched a GoFundMe page—the popular crowdfunding platform that allows people to donate in hopes of reaching a certain goal ($10,000 in Satellite’s case).

“First and foremost, we’re hoping this will allow us to put some money in the pockets of our staff, and if we can, use some money to help with the bills during the downtime,” says Gil Castillo, Satellite Houston’s talent buyer and production manager. “Most of our employees work on an hourly basis and without shows, there's no income generated for the bar or for our staff.” In return for donations, the venue is offering perks like tickets, side stage viewing, food from vendors, and more.

As Castillo explains, it’s difficult enough as it is to run a small independently-owned music venue, even in the best of conditions. “The venue is always operating on razor thin margins. We make our money from the bar as most of the money generated by ticket sales goes straight to the band...the business model for a music venue just isn't the most lucrative.” Given this, one can only imagine the frustration of these businesses having their busiest season (March - July) possibly cut off entirely. Chicago's Divino Niño playing Satellite's inaugural "Castle Christmas" festival this past December.
Photo by Connor Fields
As one of the most inherently D.I.Y. venues in the city, Satellite certainly isn’t a stranger to challenges—whether it be flooding issues, the loss of an A/C unit, or the early hurdle of turning a profit. Yet, as Castillo explains, owner Erick Quiroz's profound passion for music and the city of Houston have always managed to push the venue past each roadblock. “A lot of it was Erick putting the financial burden on his back, with the belief that this venue was doing something special for our city, and for the neighborhood our families grew up in. We’ve been at a point where the bar was not making enough to cover bills, but we knew with certain improvements like the outdoor stage, we could turn the ship around. It seems that every few months there is a big challenge presented to us, but we always try to keep a glass half full mentality, and push forward.”

When asking Quiroz himself about the financial challenges of owning a small venue like Satellite, he acknowledges the frailty of its business model, but rationalizes his decisions through the standard of music he and Castillo have managed to bring to their stage—even likening his situation to Hilly Kristal, the owner of the iconic New York City club, CBGB.

“With Kristal and CBGB, I’m sure financially it fucking sucked!” laughs Quiroz. “But I’m also sure he wouldn’t have traded any of those iconic shows or bands that blessed his stage for a better financial outcome. He was actually worried about bringing great bands in, not just shit to fill up a venue for alcohol sales. I feel like Gil and I are doing the same for Houston.”

What’s far most disappointing about Satellite’s current situation is the timing of this standstill. Since we profiled the venue back in January of last year, not only has the venue grown in terms of attendance and quality shows, but furthered their reputation among national touring acts and booking agencies has noticeably picked up momentum. In fact, this Spring alone, Satellite’s calendar was loaded with a host of critically-acclaimed national acts such as Wavves, Black Marble, The Garden, Waxahatchee, and Surfer Blood—all bands that are almost certain to generate a sell-out crowd for any venue.

While Castillo and Quiroz are surely worried about the financial impact of not being able to host these shows, it’s the loss of music that hurts the most. “Missing out on seeing some of our favorite artists play is the biggest bummer,” says Castillo. “Erick and I go to just about every show as fans first...we are huge fans of the bands we bring in. To know they are hurting, the agencies are hurting, sound people, bartenders, managers everywhere are hurting...we recognize it is much bigger than us as a venue.”

If they can reach their $10,000 goal, Satellite says that should cover them for two to three months. Like every small business across the world, all they can do for now is hold on and hope for the situation to pass as soon as possible. Though, with a devoted group of regulars that rivals any spot in town, Castillo and Quiroz are confident they’ll manage to pick up where they left off.

“I think we’ll come back stronger than ever,” says Castillo. “Satellite is a family. We’ve had a lot of people who have helped get us to where we are today...there's nothing like it. We’re always thinking ahead, and are already planning on how we will return and how to get the train back on track.”

As Quiroz plainly puts it, “Satellite isn’t going anywhere anytime soon...I love it too much.”

Along with our highly-admired restaurant scene, live music (and the few spaces that provide it) are absolutely essential to the cultural makeup of Houston—especially unconventional spaces like Satellite Houston, which do everything in their power to provide Houstonians with a sense of community that couldn’t exist elsewhere. With these institutions currently threatened by what we hope to be a once-in-a-lifetime halt to daily life, there’s no better time for fans to show their support. Whether that be by donating (for those that can), or simply spreading the word (for the many that can’t), you can rest assured knowing places like Satellite are beyond appreciative for anything that might help them once again provide our city with great tunes.

In Quiroz's own words, “We're extremely grateful for everyone who has already donated, and hope to give every one of them a big ol' hug soon. Beyond everything else, we're just excited to get back to work, do our part in our ecosystem of musicians and artists, and to see all of our friends and Satellite family when this passes...and for those who know Satty, the first outdoor show back is going to be nuts!”