Openings and Closings Take-out for the Long Haul


As you may have noticed, the Openings and Closings column has been focused on restaurants around Houston that  have turned to take-out and delivery to make it through the current coronavirus pandemic and the restrictions on dining in. However, we actually have a recently opened food truck and a restaurant that will reopen in a new spot this week, so the industry that has become the heart of Houston is still beating strong.

It's tough. We know that we will emerge from this with some terrible losses. Many of us are losing jobs, income and sanity. But, we cannot lose hope. Here's a happy list of delicious restaurants, food trucks and markets that will add a little more jelly to your quarantine belly. There are also plenty of helping hands out there for those who need a little support during this time.

The Mini KOs are halal and can be as mild or spicy as you like.
Photo by Ardsley Ringor

This new food truck had its soft opening March 19, 2020. It sells chicken sandwiches that combine Filipino adobo flavors with the Nashville Hot chicken spices.  Chef Ash, as he likes to be called, has been in the casual and fine dining industry for over ten years and has achieved his dream of owning a food trailer that serves food that represents his Filipino culture. Because everything is made from scratch, the menu is simple and just offers the AKO chicken sandwich and the Mini KOs, two chicken tenders with  a creamy slaw. Chef Ash also created a Black Garlic Aioli Sauce made with the world's most expensive garlic and his specially-made mayonnaise.

Customers have a few heat levels to choose from including the Good Bird (no heat), the Fire Bird (mild) and the Crazy Bird which is most similar to the Nashville Hot style. For those who are willing to sign a waiver, there are two extreme heat sandwiches: The Angry Bird (extra hot) and the Fire Bird (IT BURNS).

The food is halal. Chef Ash says, " Food can be used to break barriers between different cultures and religions because it is one of the few things that can be eaten and enjoyed by everyone."

Customers can order ahead by phone or text.

The lovely owner of Vietopia pushes forward with a new location.
Photo by Denny Nguyen

When many people in America are coming together, donating to food banks, ordering from their local restaurants and working on the front lines to feed, nurse and save their fellow human beings, it's sometimes hard to believe that there are still people so full of hate that they would actually yell racist and cruel insults at their fellow Americans, but that's what happened to the owners of Vietopia on April 7. The couple who own the restaurant were the victims of a racist rant from a shopper in the parking lot while they were going about their business of moving the restaurant's contents to its new location down the street. The woman yelled, " Get out of our country!" and "Get out of the United States!" You can watch the shocking video here at abc13.com.

Vietopia has new digs.
Photo by Sammi/Vietopia
Owner Sammi says that they had already signed the lease for the new location before the pandemic and things are tough enough for small businesses without these kind of issues. According to its website, Vietopia opened in 1999. The family immigrated from Vietnam in 1978.

Currently, the original spot at 5176 Buffalo Speedway is still doing to-go and take-out orders from its extensive menu of Vietnamese favorites such as pho and vermicelli,  along with some Chinese dishes like Szechuan Sizzling Prawns and Peking Duck. Delivery is available through Postmates, GrubHub, Favor and UberEats. The new location should open this week.  Please support this hard-working couple and show them that most of their fellow Americans are good, decent human beings.

This old school Italian restaurant with its red-checkered tablecloths has been a special occasion or romantic date night choice for many a Houstonian since 1983. It's lodge-like feel, rustic ambiance, Italian film posters and piano music may be off limits during the pandemic but its red gravy Italian fare like lasagne and eggplant parmigiana are still available for take out. There are also family packs that can be ordered ahead for Friday and Saturday pick up. If you're there on a Saturday, check out its Eleanora's Market, a farmers market with various local vendors from 9 a.m. to 1 p.m. The market is also open Wednesday from 10 a.m. to 1 p.m.

While trying to survive in this climate, employees were blessed by a customer leaving a $1,000 tip on a $19 to-go order with a note saying "Stay Strong," according to the restaurant's Facebook page. Clark Cooper Concepts has temporarily consolidated its various restaurants into one location for the time being at Coppa Osteria. Customers can order online or by phone for curbside pick-up or delivery. There is a variety of pastas, appetizers and even Punk's Fried Chicken available. Chef Jane Wild (The Dunlavy), Chef Michael Hoffman (Brasserie 19) and Chefs Jorge and Davide (Coppa) have also created Daily Family meal packs for pre-order. Each daily meal is available for pick-up from 4 p.m. to 6 p.m. Monday is Chicken Parmesan with capellini and house salad. Tuesday is carnitas tacos. Thursday is a Thanksgiving Feast of roasted local heirloom American turkey served with stuffing, mashed potatoes, green beans, yeast rolls and gravy. Sunday brings back Ibiza's Paella Night. Meals can be ordered for 2, 4 or 6.

There are also $15 pizza kits for something fun for the kids and bottles of wine can be ordered for the adults. 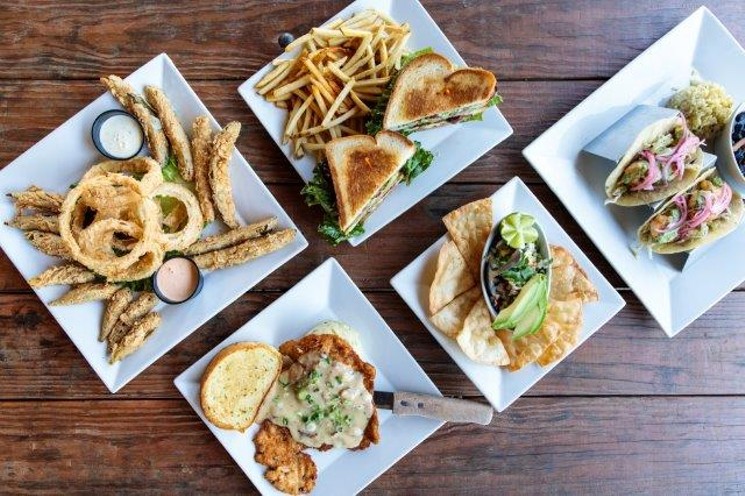 This Texas Hill Country-inspired restaurant in Cypress has an easy online menu for take-out and there is delivery through DoorDash. Besides its popular Pecan Bourbon Chicken and Chicken Fried Sammich, there are plenty of appetizers and kids meals, too. There is a Sunday brunch menu along with mimosa kits and curbside crawfish on Saturday. There are Family of 4 meal packs for $40, Wednesday through Friday.

You can also pick up a case of Bud Light ($25), a gallon of craft beer ($25) or margaritas ($35) and several cocktail kits with food purchase. On Wednesdays, wines by the bottle are half-off.

This Pakistani/Indian restaurant regularly lands owner and chef Kaiser Lashkari on Alison Cook's Houston's Top 100 Restaurants list. Lashkari was a James Beard Award semi-finalist last year for Best Chef:Southwest. He and his wife Azra have been serving their cuisine to Houston and celebrity chefs like Anthony Bourdain and Andrew Zimmern for 16 years. Lashkari originally opened a restaurant called Kaiser Restaurant in 1992, serving only take-out as reported here in the Houston Press. For now, he's back to doing to-go and delivery orders during the current crisis.  Most of the large menu is available for take-out and Lashkari is keeping up with the ever-changing culinary landscape by creating his own version of a chicken sandwich. The Himalaya Fried Chicken Sandwich ($11.50) is a thick, juicy fried chicken breast with Lashkari's special sauce and pickled onions on a challah bun from local bread man, Tasos Katsaounis of Bread Man Baking Co. It's served with curly Masala fries.

If you are hankering for something more traditional, there are various chicken curries like the mild Tikka Masala or a green curry, Chicken Hara Masala, from the Hyderabad region. It is Chef Lashkari's signature dish and was a favorite of Bourdain's. For larger families, there are catering trays of biryani, kababs, saffron rice and more.

This small, locally owned doughnut shop gets rave reviews not only for its doughnuts and kolaches but also for its friendly owners and staff. It's in the Medical Center area so if you want to treat some nursing staff or others working on the front lines in the medical field, a few dozen doughnuts would bring a smile. There are also cronuts and a tasty boudin kolache.

Loch Bar and Ouzo Bay give back to the community.
Photo by Michael Anthony

While both businesses are closed temporarily during the shutdown,  they are offering free grocery care packages to restaurant employees and first responders in need every Friday in April from 10 a.m. to noon. Just show a 2020 pay stub to get some fresh produce and other items from Urban Harvest, along with recipes from Ouzo Bay and Loch Bar to make a meal for four. Let's make sure to support these businesses when they reopen. If you're craving some honest-to-goodness bar food, Lucky's Pub can set you up with some appetizers, sandwiches, burgers and pizzas. As you and your roomie watch the Lakers play the Celtics from 1985, you can enjoy the Quarantine Pack ($49.99) which includes a large pizza, 10 wings and a case of Bud Light.

The appetizer platters offer a variety of goodies like boneless Buffalo bites, spicy pickles and several different egg roll options, including, be still my heart, Monte Cristo egg rolls. There are Cheesesteak ones as well. If that makes your heart beat just a little too fast, there are salad entrees, too. Beer is available in  6, 12 and 24 packs. You must order food with alcohol purchases.

Ninfa's restaurants will be doing pig roasts to benefit furloughed and unemployed hospitality and restaurant workers, in partnership with Houston Shift Meal. The pigs will be roasted this Saturday, April 18 and the meals will be distributed this Sunday, April 19 from 10 a.m. to noon. 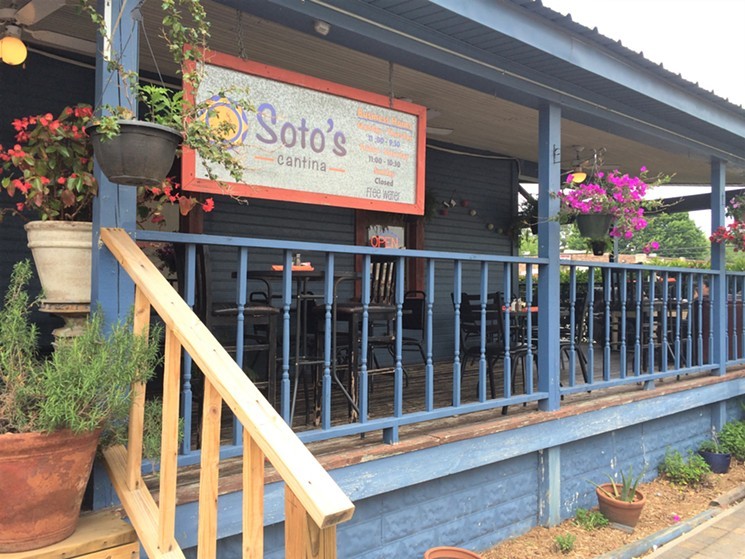 This little Mexican restaurant regularly makes Alison Cook's Top 100 Restaurants in Houston for the Houston Chronicle. Now, it needs your patronage. Lunch has been slow lately, so it is offering $7 lunch specials. Options include ground beef or shredded chicken tacos, enchiladas, flautas and quesadillas. The meals come with rice, beans and a soft drink. The whole menu is available, however, and margaritas, beer and wine can be added to your food order. They offer delivery through DoorDash, Favor and GrubHub but nearby residents might want to help out further by eliminating the delivery commissions and pick up curbside instead.

The Bacon Maple Bar is a favorite.
Photo by Lorretta Ruggiero

Voodoo Doughnuts has temporarily closed three of its locations, including the 6th Street store in Austin, but its Houston shop is open 24/7 with drive-thru service.  The lobby is open from 5 a.m. to 3 a.m. Customers can order online or at the store.

There is a variety of flavors so try the Voodoo Dozen, the Classic Dozen or the Vegan Dozen to find your favorite.

This is the newest concept from owner and chef Youssef Nafaa's Bella Restaurant Groups. It celebrated its grand opening March 3, just two weeks before the restaurant restrictions were put in place for Houston and Harris County. It offers build-your-own sandwiches and bowls with protein options like beef tagine, shrimp and kefta (beef meatball). Guests can choose a base of Moroccan pita, couscous, lentils, mixed greens and more. There's even a gluten-free and vegetarian potato cake option. Toppings include cinnamon carrots, roasted beets, feta cheese and zaalouk (eggplant).  If the Quarantine Fifteen is threatening your waistline, there are a number of healthy choices to be had at ZOA, including smoothies. There are also treats like baghir (Moroccan pancakes), tarts and cookies.
California Privacy Policy California Collection Notice
Do Not Sell My Info
Use of this website constitutes acceptance of our terms of use, our cookies policy, and our privacy policy The Houston Press may earn a portion of sales from products & services purchased through links on our site from our affiliate partners. ©2022 Houston Press, LP. All rights reserved.