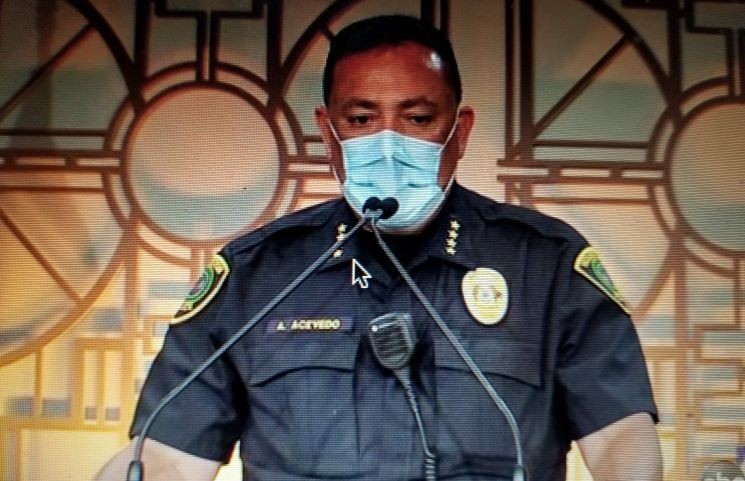 Screenshot
More officers will be on Saturday to try to prevent a recurrence of looting and vandalism.
Attributing most of Friday night's vandalism problems to about 10-20 percent of the participants at the Justice For George Floyd march in Houston, Police Chief Art Acevedo at a 3 p.m. press conference today said officers will be out in force tonight trying to make sure looting and physical attacks are kept to a minimum.

George Floyd, a 46-year-old Houston native who grew up in the Third Ward and went to Yates High School, had moved to Minneapolis. On May 25 he was stopped by police officers there investigating a report that someone had attempted to pass a $20 counterfeit bill. One of the officers knelt on the handcuffed Floyd's neck for almost nine minutes while none of the other three officers tried to intervene. Floyd, who repeatedly told officers he couldn't breathe, died later. All four officers were fired but it wasn't until Friday that Derek Chauvin was charged with third-degree murder and manslaughter in Floyd's death.

A vigil was planned for 6 p.m. today at Emancipation Park.

Although Friday's march from Discovery Green to City Hall starting at 2 p.m. Friday was mostly peaceful, some trouble spots broke out as crowds dispersed around 4:30 p.m. Many people went home, but some splinter groups carried on through the night, in one case smashing a patrol car and in another blocking Interstate 10 near downtown. Some businesses had their windows smashed and there were reports of looting.

The police chief attributed a lot of the violence to "outside agitators," and said most of them were white, not African-American. He said his department is monitoring reports that a white supremacist group might be headed to Houston to get in on the action.

Mayor Sylvester Turner who called the press conference, commended the police officers, saying they showed a great deal of restraint while water bottles and other hard objects were thrown at them. He thanked the Houston Fire Department as well since it went out on a lot of EMS calls and fire reports in relation to last night's protests.

Turner said the violence occurred primarily in the night time hour. He thanked the people who protested peacefully. He said he'd talked to Gov. Abbott said he wanted to thank him for the additional Department of Public Safety support the governor authorized. He also said he was activating the city's Office of Emergency Management would be in operation overnight — just as is done with natural disasters.

Tallying up the night's events, Acevedo said there had been 137 arrests of which 102 were charged with obstruction of a roadway, 13 with interference with public duties, seven are facing charges of evading arrest, one burglary of a building arrest, one failure to identify , five criminal mischief, one retaliation, three assault on peace officers, one aggravated assault with a deadly weapon, three resisting arrest. We had eight officers injured and 16 patrol vehicles damaged." He said later that four of the cases of police officer injury were for head injuries, and that all those officers had been treated and released.

"We are in the process of doing a damage assessment throughout the downtown area," he said. He also said later that his department is closely reviewing all the video taken by his department, television stations and others and if they identify looters, they will be making additional arrests. He said his department is in "full mobilization which means 12 hours on, 12 hours off. All members of the department will be in uniform and will be deployed out in the streets.

"If you think there were a lot of cops there yesterday there's nothing compared to what we're going to have out moving forward."

"We do not want people going on the freeways," Acevedo said. "The last thing we want to see is someone in an 18-wheeler or a truck just plowing through people." He also said he saw video of children out in the crowd last night after the vandalism and he urged people to take their children home immediately if something like that reoccurs.

Acevedo was asked about a video showing a woman being trampled by a horse ridden by a mounted HPD officer. He said he thought it was an accident, but the matter was still under review — adding that riding a horse around crowds should be done slowly (in the video that is not the case) just like driving a car in crowds.

Turner said the violence was taking away the focus from where it should be: on George Floyd and his family. "This is the same city that George Floyd grew up in and his body will be returning to this city. The focus needs to be on supporting and uplifting his family. It's not about these other individuals who want their moment. It's about George Floyd and justice for George Floyd. "
California Privacy Policy California Collection Notice
Do Not Sell My Info
Use of this website constitutes acceptance of our terms of use, our cookies policy, and our privacy policy The Houston Press may earn a portion of sales from products & services purchased through links on our site from our affiliate partners. ©2022 Houston Press, LP. All rights reserved.