“It was dead silence, everybody was holding their breath. When we first went into the trees, it was just a brushing sound, the soft parts of the tops. But when we started lowering more, that’s when it sounded like a thousand baseball bats beating the fuselage. It was horrendous,” he recalls. “And then the plane started breaking up. It took us a long time to crash and stop. I was hurt, I was bleeding, I was cut, and all the cartilage from my throat to my breastplate was ripped. And I cut my legs up getting out of the plane to look for help.” DVD cover
Pyle’s tale and that of one of rock’s greatest tragedies is told in the new film Street Survivors: The True Story of the Lynyrd Skynyrd Plane Crash. And while COVID-19 has thwarted plans for its theatrical release, it will be available for purchase and VOD platforms beginning June 30.

The timeframe is mostly concerned with the day before, day of, and day after the plane crash, the result of a combination of engine mechanical issues and pilot error in miscalculating fuel levels. In fact, the plane’s engines had already had fiery trouble on the previous flight, shaking all aboard as they deplaned at Greenville, South Carolina, where the band would play its final show. A mechanic was set to meet the aircraft after it would have landed in their next destination of Baton Rouge, Louisiana.

And while it’s a talented group of actors playing real-life participants, Pyle himself narrates portions of the film and makes occasional but not disruptive on-screen appearances.

“There have been many variations and accounts and contradictions of this story. But I was there,” he says in the film. “This is something that shouldn’t have happened, but it did.” Pyle and his drummer sons also wrote and performed three new songs – including “Street Survivor” – that are heard.

Produced on a small budget of $1.5 million, Street Survivors looks a lot more expensive. Hardcore Skynyrd fans will snap to attention at the period-correct detail down to band member’s favorite T-shirts and the texture of wigs and facial hair (though Pyle says they could have done even better with more budget and his involvement – more on that later). Ian Shultis stars as Pyle, and gives an affecting performance. The movie recreates Lynyrd Skynyrd's ill-fated plane journey. Taylor Clift (behind bottle) plays lead singer Ronnie Van Zant.
Screen grab/Courtesy of Cleopatra Entertainment
In the film – as in real life — Pyle stumbled out of the wreckage to find those around him dead, dying, or screaming in pain. These scenes are incredibly realistic and hard to watch at some points, more horror movie than music biopic.

And despite his own serious injuries, the drummer decided to head out to find help, which he eventually did at a nearby farmhouse. Just prior to that, the film shows Pyle wading waist-deep through dark swamp water and coming upon a water snake and yelling at it “I will bite your fucking head off!”

“It really happened, but I didn’t scream like a madman which is what Ian did in the movie. The snake slithered up to me in the dusk and I said calmly ‘I will bite your fucking head off.’ And then I laughed at myself,” Pyle says. “In that moment, knowing I was talking to a snake, it made me feel alive. And that’s what drove me to get help back to my friends. And I trudged on with my Marine Corps training.”


The script's basis comes from 22 hours of videotaped interviews that Pyle did with Director/Writer Jared Cohn. “It was difficult. I cried, I laughed, I screamed, sometimes I’d get up and punch a wall,” Pyle recalls. “I went to the deep tracks with that.”

There are scenes of ‘70s-era rock star partying involving topless women, drinking, fighting, and the word “SKYNYRD” spelled out in cocaine on a glass table top. But there is also the band working on music, forging bonds, navigating their home lives, and talking about plans for the future.

That the film is being released at all is a story in itself. In August 2017 after the movie was completed, Judy Van Zant Jenness (Ronnie’s widow), along with a group including reps and estates of other band members, successfully won a U.S. District Court injunction to stop the film’s release. They cited a consent order members signed in 1988 concerning usage of the band’s name and story.

That decision was overturned by a U.S. Circuit Court of Appeals in October 2018, clearing Street Survivors to be seen —  though Pyle had to disassociate himself from producer Cleopatra Entertainment and any official role during the filming process in order to aid that decision. 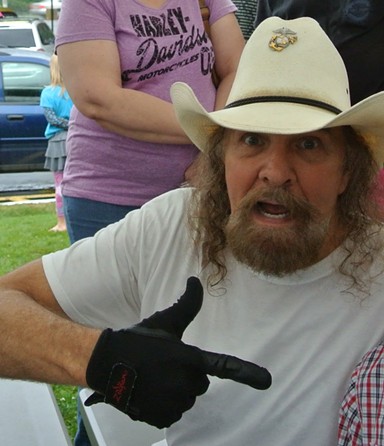 The real Artimus Pyle greeting fans in 2011.
Photo by Carl Lender/WikiCommons
Pyle has a lot to say about the lawsuits – and Jenness – enough to fill an another entire story. As does he about a number of other players in the Lynyrd Skynyrd story past and present, by name. Suffice to say, they are not complimentary. There’s also Skynyrd-related financial windfalls totaling $15 million that he says have been taken or stolen from him over the years.

“Judy was coming at us the entire time with vicious, nasty lawsuits. But it was a film that needed to be done. And I wanted the Skynyrd fans to know what happened and what we had been through,” he says.

Viewers will notice there is no authentic Lynyrd Skynyrd music in the movie, nor any songs made famous by the band, even in cover versions (the sole number the band performs in the film is the J.J. Cale-penned hit “They Call Me the Breeze”).

Pyle says Cleopatra wanted to explore either of those options, but the new lawsuits it might generate would just bring additional headaches and delays. Though he actually puts it in more…um…colorful terms.

But fans have understandably wondered over the years: Why did the band willingly get on an aircraft they saw for themselves had mechanical issues? And what to make of Ronnie Van Zant’s seemingly nonchalance and his philosophy of “When it’s your time to go – you go.’”

“It wasn’t that cut and dried. On the plane before it crashed, we had gotten together and decided to buy two tour buses – one for the girls and one for the crew. And we had decided as a band to get a Lear Jet so our time in the air between shows would be 45 minutes instead of 2 ½ hours,” Pyle says.

“After our [planned landing] in Baton Rouge, they were sending a guy over from Falcon Airways, where we leased the airplane, to fix the engine. And if he couldn’t fix it, we were going to fly commercial. We had a contingency plan. Ronnie wasn’t just like ‘Hey, let’s jump on this airplane and go have a crash.’ It was like ‘Look, we’ve got a gig in Baton Rouge. Let’s get there the best way we can and let’s go.’”

In the end, Pyle says he is “very proud” of Street Survivors, and that the young actors put their “hearts and souls” into the project. He watched it the first time by himself and cried. And he’s screened it seven more times since, including a public premiere at a pre-pandemic Hollywood Reel Independent Film Festival where he walked the red carpet along with much of the cast and filmmakers. Taylor Clift (as singer Ronnie Van Zant) and Samuel Kay Forrest (as guitarist Steve Gaines) perform in the film. Attention to detail: Clift's Neil Young T-shirt is a replica of the one the singer actually wore. Despite the barbs traded in Young's "Southern Man" and Lynyrd Skynyrd's response "Sweet Home Alabama," the musicians actually respected each other.
Screen grab/Courtesy of Cleopatra Entertainment
Artimus Pyle quit Lynyrd Skynyrd in 1991 several years after the band started up again. He and guitarist Gary Rossington are the sole surviving members of the plane crash lineup.

The pandemic has also put a halt on the current Rossington-led Lynyrd Skynyrd’s “Last of the Street Survivors” worldwide farewell tour. Rossington himself has faced frequent health scares in recent years, and Pyle adds the only “silver lining” of the current pandemic crisis is that it’s allowing the guitarist to rest up.

Though he and other members came together to play a short set at their 2006 induction into the Rock and Roll Hall of Fame, he’s had no involvement with the band since then. But as leader of the Artimus Pyle Band, the drummer and bandmates perform a mostly Skynyrd set to enthusiastic fans.


Still, time and mortality have a way of bringing seemingly bitter musician feuds to some sort of closure, if not a full reconciliation. Robbie Robertson has written about visiting ex Band-mate Levon Helm on his deathbed, and estranged former Allman Brothers Band guitarist Dickey Betts had a warm meeting with Gregg Allman toward the end of the latter’s life.

So, does Pyle see a time when he might have a similar encounter with Gary Rossington – related to health statuses or not?

“Bob, I would give anything to talk to Gary. I would love to talk to Gary. I saw him at [Skynyrd keyboardist] Billy Powell’s funeral. He hugged me and kissed me, but we were surrounded by [current band reps] Vector Management and Gary’s wife Dale,” Pyle says, adding he feels that Rossington is easily manipulated by others and acquiesces to them, and it often involves money.

“I love Gary and I miss him. I know he’s surrounded by some snakes. I would give anything for us to have a private moment together. Just me and him meet. And it would be totally cool.”

Street Survivors: The True Story of the Lynyrd Skynyrd Plane Crash, will be available on DVD, Blu-ray, and Video on Demand beginning June 30. A companion soundtrack album will also be available.
California Privacy Policy California Collection Notice
Do Not Sell My Info
Use of this website constitutes acceptance of our terms of use, our cookies policy, and our privacy policy The Houston Press may earn a portion of sales from products & services purchased through links on our site from our affiliate partners. ©2022 Houston Press, LP. All rights reserved.