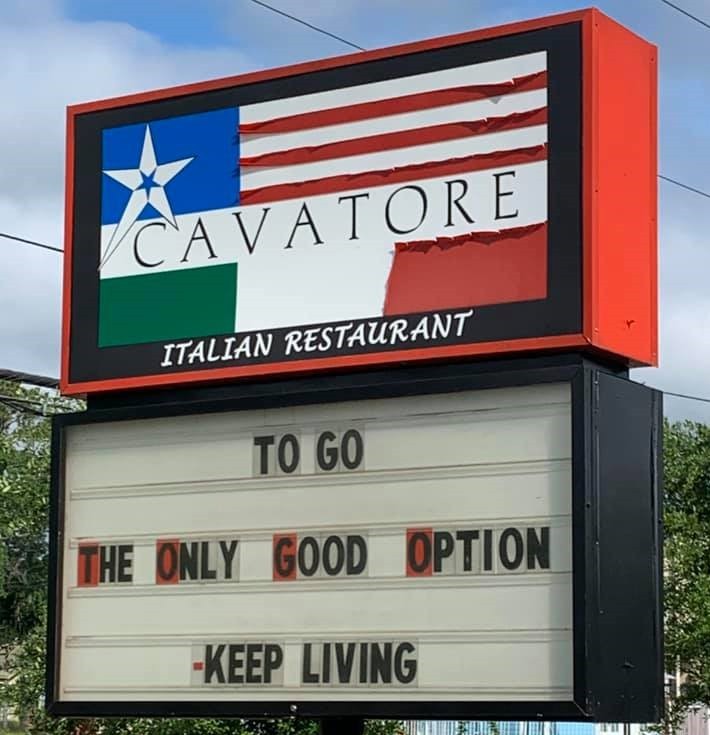 Photo by Federico Cavatore
Looks like we're back to square one.

Since March 17, our Openings and Closings column has been a mix of closures, both temporary and permanent, reopenings and a few openings. As Texas reopened, we saw some restaurants jump right back in the water while others dipped in a toe or two. Others still remained unconvinced and continued to keep their dining rooms closed. As each step of the reopening process has happened, some restaurants have experienced further obstacles with employees testing positive for COVID-19 while a few businesses flouted the capacity restrictions and found themselves running afoul of the law.

This week, there are a couple of restaurants going forward with opening while some have voluntarily chosen to close for a second time or revert to take-away only. We talked with Federico Cavatore of Cavatore Italian Restaurant about some of the challenges restaurant owners are facing during this second resurgence. Here's what he had to say:

"We’re going to have to adapt to doing things a little differently. That’s just part of business...With Hurricane Harvey, it was an overnight storm, you knew it was going away, one day the sun would come out, things would get better.With COVID-19, just when you think things are getting a little better, it comes back. People are tired, people are depressed, people are scared, people are losing jobs, people are acting different... We need to find that common ground, that normalcy. We’re a fabulous country. I hope we can all come together, build this country up stronger than it was. That’s what’s necessary. There doesn’t need to be any type of division between anybody... In Harvey, you saw every walk of life pull together and help each other up. This is a time when people should really come together and help one another."

Let's do it, Houston.

The triple pork chop at The Rustic will satisfy carnivores.
Photo by James Coreas
The Rustic Uptown Park, 1121 Uptown Park Boulevard, is projected to open July 8.  The restaurant, bar and live music venue from Free Range Concepts will be the second Houston location. The first opened at 1836 Polk in November 2018. There are additional locations in Dallas and San Antonio. The Dallas location was the first for the collaboration between Free Range owners Kyle Noonan and Josh Sepkowitz with Texas country music artist Pat Green. FRC also operates The General Public and Bowl and Barrel with locations in Houston, Dallas and San Antonio.

The Rustic blends country cuisine with Texas flavors.
Photo by James Coreas
With regards to the pandemic, co-owner Noonan said, "Due to our large open air venues that allow for plenty of social distancing and allow for a lively atmosphere, The Rustic is a strong brand that is perfectly situated for times like these."

The Rustic Uptown will also feature daily live music, an expansive outdoor patio, 40 beers on tap plus a food menu of Lone Star favorites like Texas quail, beer can chicken, tamales three ways and a huge Tomahawk steak. Currently, the Polk location is offering $5 frozen drinks all day, all summer. Choices include margaritas and a daily rotation of special frozen cocktails.

Tiny Champions, 2716 McKinney, announced in an Instagram post that it is currently hiring all management positions, according to EaterHouston. In the post it stated that the restaurant will be an anti-racist, pro-LGBTQ workplace. The new restaurant comes from Sean Jensen, pastry chef Julia Doran and chef Jason Vaughan, the team behind the much lauded Nancy's Hustle, which opened in East Downtown at 2704 Polk in December 2017.  Vaughan was a semi-finalist for the James Beard Award Best Chef: Texas for 2020.

In a March press release, the owners said that the 90-seat restaurant would focus on the "tiny champions" of fermentation such as naturally leavened pizza dough and pickled and preserved vegetables, as we reported here in the Houston Press. There will also be natural wines and simple cocktails.

La Michoacana Meat Market, 8200 FM 1464, opened in Richmond June 12, following two other recent openings at 13867 Cypress North Houston, May 14, and another store in Porter, May 6. There are plans for a location in New Caney soon.

The supermarket was founded in Houston in 1986 by Mexican immigrants and caters to the Hispanic population across Texas with more than 140 stores in cities such as Dallas, Austin, Fort Worth and San Antonio plus smaller towns like Corpus Christi, Lufkin and Bryan. The vast meat market is its primary focus with bargain prices on meat like brisket, beef ribs, chicken quarters and pork butt. Houstonians head to La Michoacana for tamale-making supplies and Mexican ingredients not easily found at other grocery chains. There are plenty of tasty  prepared foods, too.


Hay Merchant, 1100 Westheimer, reopened July 1 for dine-in and take-out. It's the last of Chris Shepherd's restaurants to reopen after the restaurant restrictions were put in place March 17 because it was serving as home base for H-E-B's Take and Bake meals, a collaboration between Shepherd and the Texas-based grocery chain.

The dining room will open to 50 percent capacity with 45 seats. Tables will be placed six feet apart and there will be hand sanitizers at every one with glass dividers along the banquettes. Guests will be seated by a hostess and must wait in their cars for a text if the restaurant is at full capacity. Guests can call ahead and put their names on the list prior to arrival.

All ages will be allowed in the restaurant during service hours which are currently Tuesday through Thursday and Sunday, 5 p.m. to 10 p.m. and Friday and Saturday, 5 p.m. to 11 p.m.  Hay Merchant will be closed for weekday lunches for now but weekend brunch is coming soon.

Sous chef Lucas McKinney and kitchen manager Alfonso Leyva have been working with Shepherd to create new dishes like Pepperoni Pizza Dip with housemade focaccia, a muffaletta and three new salads. On the entree side, there are new dishes like Vietnamese Fish and Chips, McKinney's version of Underbelly's Cha Ca. Longtime favorites like the Cease and Desist Burger and crispy pig ears remain on the reopening menu. Spirits director Westin Galleymore has created a brand new cocktail list to reflect the laid back vibe at Hay Merchant which includes two frozen drinks along with original and classic concoctions.

Kata Robata, 3600 Kirby, reopened for curbside pick-up service June 27 after closing for a week to do deep cleaning and have employees tested for COVID-19. Though all employees tested negative, the Japanese restaurant, helmed by Chef Manabu Horiuchi, has decided to keep the dining room closed temporarily and focus on take-out orders for now. Update: Kata Robata will reopen its dining room for lunch and dinner July 6.

The restaurant has added new rolls to the menu. For a show-stopping July 4th treat, there's its signature rolls platter for $120 which includes rolls such as its Texas Hamachi, Longhorn and Caribbean. The latter features a lobster tail for a special bonus. You'll have to arm wrestle to see who gets it. Customers can add on sangria, sake and wine to-go as well.

Federico Cavatore and his staff play it safe.
Photo by Federico Cavatore
Cavatore Italian Restaurant, 2120 Ella, has closed its dining room temporarily and is concentrating its service on take-out and delivery. Owner Federico Cavatore says that going back to 50 percent capacity for dine-in just wasn't profitable.

Currently, the 36-year-old restaurant is doing curbside take-out of its pastas, pizzas, seafood and more. It also hosts Eleanor's Market Saturday from 9 a.m. to 1 p.m. and Sunday 10 a.m. to 2 p.m. The market features local vendors with prepared dishes and products.

Rainbow Lodge, 2011 Ella,  reopened July 1. It closed June 28 after an employee tested positive for the virus. The employee had not been at the restaurant since June 19 and did not have contact with guests. After further sanitization,  its rustically elegant dining area is back open at 50 percent capacity. It is also offering take-out packs for those who are not quite ready to dine out, plus cocktail kits. 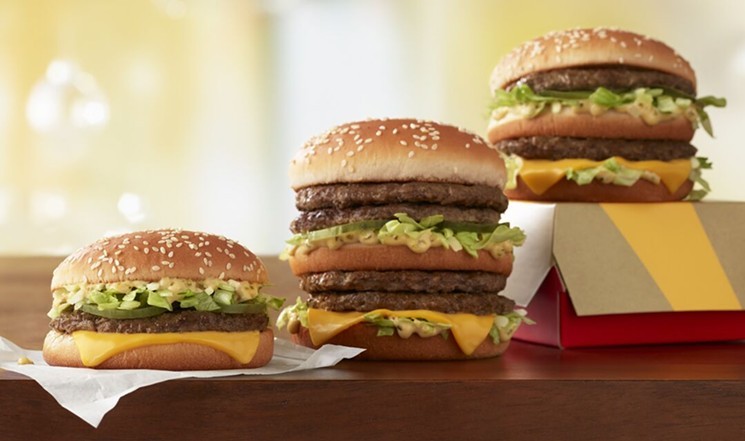 You'll be lovin' it on the go.
Photo by McDonald's Corporation USA

McDonald's USA will not reopen any more dining rooms for at least the next three weeks, as reported by Restaurant Business Online. In a letter to the system, McDonald's USA President Joe Erlinger, along with Mark Salerba, Chair of The National Franchise Leadership Alliance, announced that the company would put reopening plans on hold to protect restaurant teams and customers due to the resurgence of COVID-19 cases across many states.

Approximately 15 percent of the 14,000 locations nationwide had reopened dining rooms. With the announcement from the president, operators have an option to close their dining rooms and revert back to drive-thru and counter service only, whether or not state and local restrictions require it.


Bosscat Kitchen and Libations, 4310 Westheimer, closed short term, as first reported by the Houston Chronicle. The announcement was made June 27 on its social media. The decision to close for the time being was made due to the spike in coronavirus cases across Houston and Harris County. In its announcement the restaurant said, " We do not want to contribute to any further spread of COVID-19. It is in the best interest of our staff and customers". The Chronicle also lists Batanga, 908 Congress, and Bacaro Kitchen and Wine Bar, 14201 Memorial, among others that have voluntarily closed due to the resurgence of COVID-19 cases.

Hando, 518 W. 11th, has closed temporarily after an employee tested positive for COVID-19. In a press release the restaurant stated, " The safety of our patrons and staff is our top priority...we have decided to temporarily close until further notice. We are requiring all of our team members to be tested immediately. The restaurant will be sanitized and deep cleaned to make sure we meet all CDC guidelines." The restaurant will reopen when the owners feel that they can do so safely and responsibly and are grateful for the support during these challenging times.

Voodoo Doughnut, 3715 Washington, is adding a new Quarterly Give-Back Campaign doughnut to its line-up. The Key Lime Crush doughnut is a raised yeast shell with key lime filling, vanilla frosting, crushed graham crackers and a caramel drizzle. A portion of the proceeds from each Key Lime doughnut will go to the National Alliance on Mental Illness, the nation's largest grassroots mental health organization. The offer is available at participating locations in Oregon, Austin, Texas and Denver, Colorado in addition to the Houston store.

The Cannolo is an Italian-inspired treat with a hippie vibe.
Photo by Ariel Pastore-Sebring
The quirky doughnut shop is also rolling out new seasonal Cannolo flavors: Lemon Powdered Sugar, Dulce de Leche Cinnamon Sugar and Banana Cream Pie. Voodoo will open a second Houston location at 1214 Westheimer near the end of 2020. If this year ever actually ends.

This weekend just got lit with twelve flavors of fun.
Photo by Taco Cabana


Taco Cabana is launching its MargaritaPalooza July 3 with twelve margarita flavors at participating locations across Houston and Texas. The frozen ritas are a bargain at $2, all day, every day. Flavors include Prickly Pear, Mangonada, Mojito, Frose, Watermelon and even Dr. Pepper. There's the Star Spangled Banner with Lime, Strawberry and Blue Curacao that will make a stay-at-home Independence Day a bit more festive.

There are other family meal packs available plus beef jerky, steaks, and even mesquite charcoal or wood for the grill. There are dry goods such as paper plates, toothbrushes and rolls of toilet paper. Let's hope this resurgence doesn't lead to another shortage.