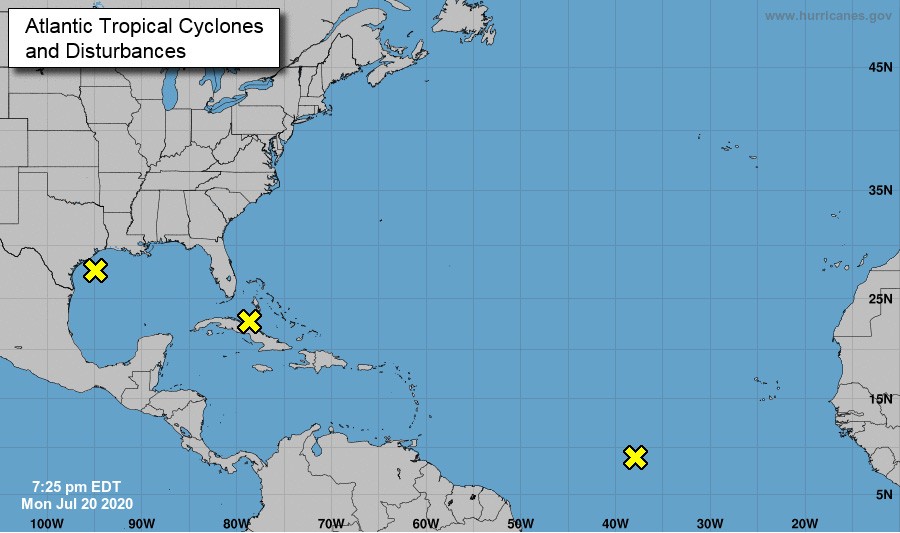 National Hurricane Center
In case you forgot, the yellow Xs mark tropical disturbances in the Atlantic.
We know you are a little caught up at the moment with a pandemic, civil unrest, an economic meltdown and what feels like the disintegration of the fabric of society as we know it, but this is your friendly reminder it is hurricane season. And you need look no further than the current tropical outlook to reinforce that unfortunate reality. Welcome to 2020.

As of Monday evening, three separate tropical disturbances were spread across the Atlantic Basin including two very close to Texas. The first is likely to harmlessly make landfall on Tuesday along the Texas coast. We felt some of its effects on Monday with scattered showers across the region. More of that, perhaps a bit more organized, will be on tap for Tuesday.

Fortunately, it's just a tropical wave with some modest chances for rain that we desperately need right now.

The second wave is a bit more interesting. Sitting out in the Caribbean and moving westward toward the Gulf, it would seem to have plenty of time to organize into something more powerful, but, as of yet, no forecast model has it reaching any worse status than a very mild tropical storm. Most don't develop it at all.

That doesn't mean it won't bring more rainfall. Because it will continue to move rather quickly, it probably won't do much more than spoil the upcoming weekend with precipitation, but it bears watching nevertheless. Were this a month from now, no doubt we would be quite a bit more concerned as the time between the third week in August and the third week in September is the most active part of hurricane season.

As it is, we are in July and the components needed for rapid intensification just aren't in place at the moment.

The third disturbance is way out in the Atlantic and probably the least likely to survive the wind shear in its path. But, the way these have lined up this week serves as a warning to anyone who may have been complacent about hurricane season. The nightmare scenario is a devastating hurricane in the middle of a deadly pandemic. The former we can't do anything about but prepare ourselves. The latter, well, wear a damn mask.
California Privacy Policy California Collection Notice
Do Not Sell My Info
Use of this website constitutes acceptance of our terms of use, our cookies policy, and our privacy policy The Houston Press may earn a portion of sales from products & services purchased through links on our site from our affiliate partners. ©2022 Houston Press, LP. All rights reserved.