With Barely a Break For a Tropical Storm, Rice Students Continue to Protest Willy's Statue 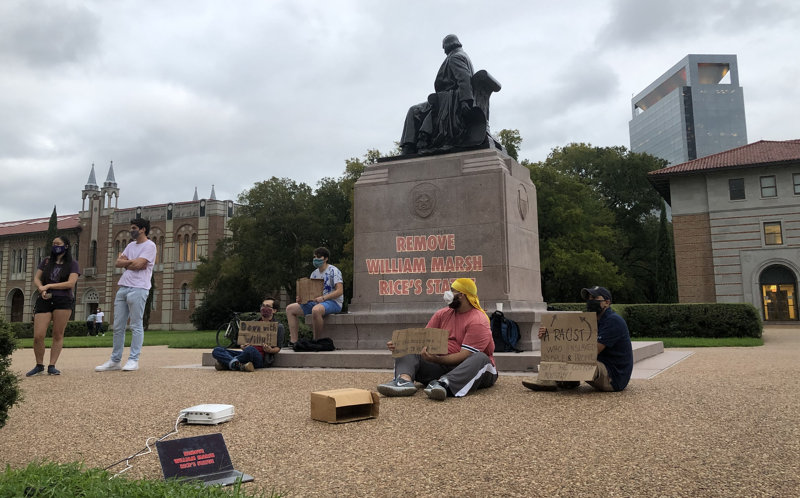 Photo by Anna Ta
Students protest the statue of William Marsh Rice in the university's main quad.
As Tropical Storm Beta approached Houston, a handful of Rice University student protesters weathered the rain outside in the school’s main quad, huddled under umbrellas and by the towering statue of the university’s founder, William Marsh Rice. While the students abided by the flash flood warnings and took the next day off, they were back out there the following day and every day since.

The statue has been the site and cause of daily protests this semester as students call for it to be taken down, citing Rice’s documented history as a slaveowner and a racist.

Shifa Rahman first started the daily protests on August 31 and returns nearly every evening at 6 o'clock, accompanied by a cardboard sign that reads “A racist that owned enslaved people” on one side and “He envisioned this university to be ‘white only’” with arrows pointing up to Rice.

“Students at this university will not settle for anything less than removing that statue,” Rahman, a Rice junior, said, adding that they’ll be sitting at the statue every day until the university commits to taking it down. “One thing that I've learned from life is that it takes 21 days to form a habit and for 21 days straight, I've sat at this statue. I know what I’m capable of and I know that this is work that’s necessary.”

It’s now been 28 days and while Rahman began these sit-ins alone, the protests have grown, even including remote-learning students who join over Zoom. Rice junior Kierstin Wilkins began attending the protests remotely over a week ago.

“When your peers voice complaints, especially your Black peers and peers of color, it's your responsibility to listen to them and see where you can help,” Wilkins said. “A lot of people here at Rice have privilege and you can use it to other people's benefit.”

Although Wilkins believes the university should remove the statue, she expressed doubts about whether it could really happen. Rahman said they haven’t been contacted by the university administration regarding the protests or the possibility of the statue’s removal. This week, Rahman is planning to release a letter to the Board of Trustees urging them to take action.

In response to questions from the Houston Press, Rice did not commit to any course of action in a statement, but noted that the university task force on slavery, segregation and racial injustice has been tasked with researching Rice’s past and understanding how that history continues to “shape the present state of the university.” According to the statement, part of the task force’s work will include the future of the statue.

“The university has heard from students and alumni who believe it should relocated on campus or completely removed from the campus, while others believe it should remain in the academic quadrangle either as it is or with significant contextualization,” the statement said, acknowledging the wide variety of opinions on the statue’s current location.

Calls for Rice’s statue to be taken down began over the summer in a national wave of anti-racist activism that followed the police killing of George Floyd in Minneapolis.

In June, Rice alumni Gabrielle Falcon and Summar McGee circulated a petition calling for the removal of the statue and for Rice’s likeness to be removed from all university marketing materials.

“By leaving Rice's statue in the center of the quad and using his imagery in [public relations], Rice continues to immortalize a racist enslaver who intentionally impeded the ability for Black students to earn an education at Rice. His statue remains a reminder every day to Black students of the barriers to their success that existed then and now,” reads the petition, which has received over 2,700 signatures.

The reactions to the initial petition were deeply varied among alumni, if Facebook comments are anything to go by. Posts in Rice groups discussing the statue’s possible removal received hundreds of comments. Several comments point to the fact that the statue is a tomb marker — Rice’s ashes are interred in the base. Rahman disagrees that removing the statue would affect the tomb.

“We don't care about the ashes, we care about the bronze," Rahman said. "It's the glorification and putting him on a pedestal, the very vestiges of Rice's anti-Black racist history that has to come down. I would rather not have any more Rice students have to walk by it again and that's not possible with its current location in the central quad.”
California Privacy Policy California Collection Notice
Do Not Sell My Info
Use of this website constitutes acceptance of our terms of use, our cookies policy, and our privacy policy The Houston Press may earn a portion of sales from products & services purchased through links on our site from our affiliate partners. ©2022 Houston Press, LP. All rights reserved.