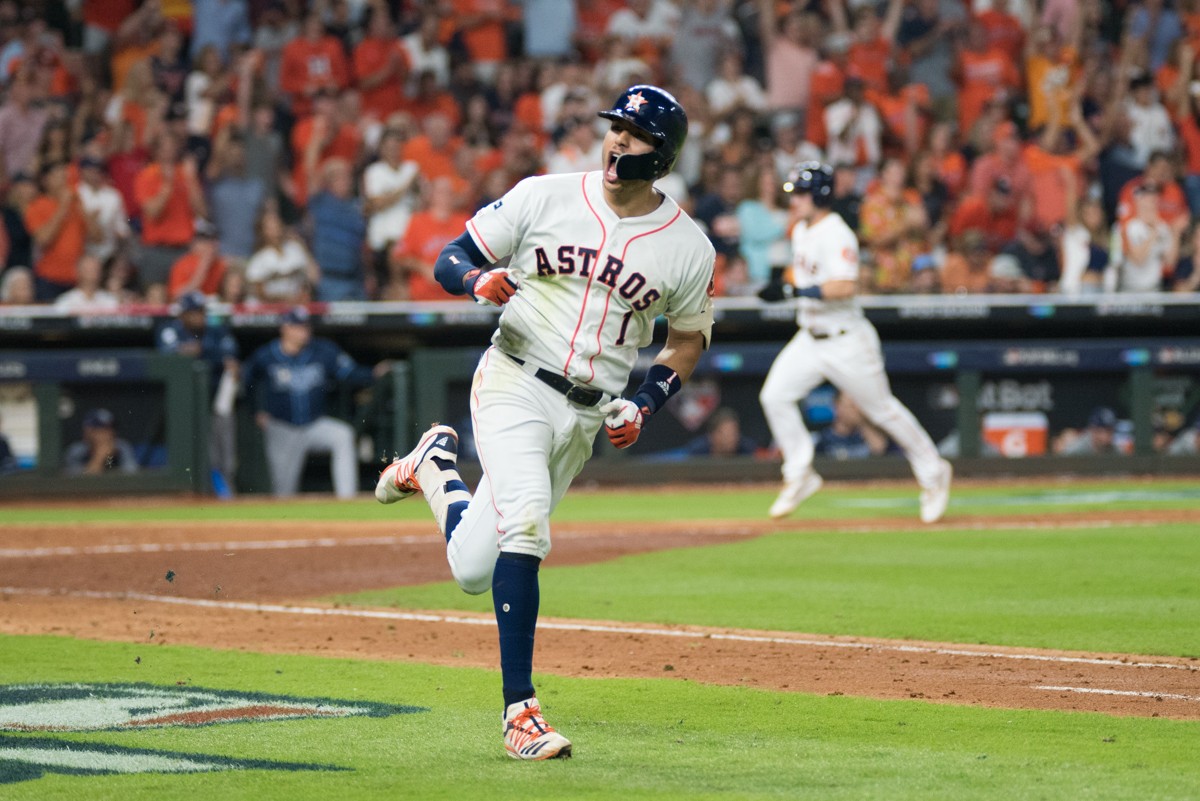 Photo by Jack Gorman
Carlos Correa continued his torrid run in the postseason with a three-run homer in Game 4.
"They wanted us. They got us." - Astros catcher Martin Maldonado via Twitter.

It's incredible to think how hated the Astros are, but only peruse Twitter for a while and you can feel the hate. That was even more evident after the Game 4 win over the A's on Thursday. The Astros blasted Oakland 11-6, hitting four more home runs (both teams had a remarkable 23 in the four-game series) and moving on to the ALCS beginning Monday against the winner of the Rays-Yankees series.

Yahoo Sports summed it up with the headline, "Like It or Not, Astros are Back in the ALCS." It is the fourth straight season the 'Stros have appeared in the conference title series, only the fifth time that has happened in the history of baseball. And despite the lackluster season at the plate, it was the bats of their starters including Carlos Correa, Michael Brantley, Jose Altuve, George Springer and Alex Bregman that did most of the damage.

Here are our thoughts.

For all the young pitching, this is a veteran ballclub that has been through the postseason numerous times as a group. They understand what is called for and their focus seems to sharpen when it is needed. No one would argue that limping into the playoffs as one of only two teams to ever make it with a losing record only to turn it on later is a good plan, but so far, that is what the Astros have done much to the chagrin of the rest of the league and particularly the A's.

It was a bit of a surprise that Zack Greinke managed to play in this game. He had just been evaluated by a doctor for arm soreness and he was a late addition as a starter on Thursday. It didn't get off to a great start either when Ramon Laureano blasted a three-run homer off Greinke in the second inning and a second solo shot in the fifth. But, once again, the young bullpen came to the rescue. Blake Taylor, Christian Javier and Enoli Paredes combined for three-and-a-third innings of three-hit, shutout baseball.

Did they Astros just need to ramp up to this?

Given that the season was short and the Astros have been known to occasionally come out of the gate a little slowly, one does have to wonder if the 60-game regular season was prelude to what we are seeing now. This is about the time when Houston bats come to life. In the last three seasons, they have tended to start slow on offense before getting into a groove. Maybe they just needed time to get completely healthy and find their comfort zone. If so, they will continue to be dangerous going forward.

Don't sleep on Kyle Tucker because he hasn't gone yard.

While Tucker, who led the team in home runs in the regular season, hasn't gone deep yet in the playoffs, he is hitting over .400 and had a huge catch at the wall in the late innings Thursday that seemed to take the life out of the A's. Tucker was part of an incredible 2015 class that netted the Astros the young outfielder and Bregman through the draft as well as Paredes, Javier, Framber Valdez and Jose Urquidy via international free agency. That's quite a haul.
California Privacy Policy California Collection Notice
Do Not Sell My Info
Use of this website constitutes acceptance of our terms of use, our cookies policy, and our privacy policy The Houston Press may earn a portion of sales from products & services purchased through links on our site from our affiliate partners. ©2022 Houston Press, LP. All rights reserved.