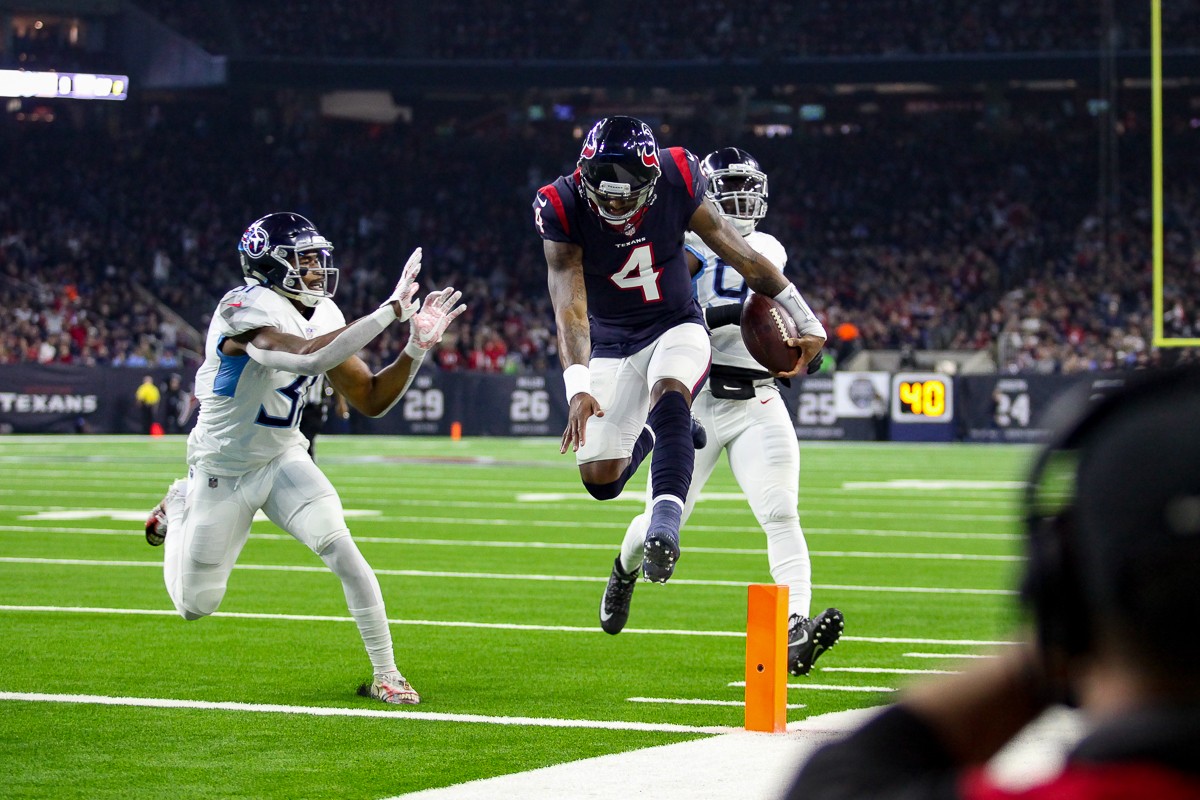 Photo by Eric Sauseda
Deshaun Watson has had some of his biggest games against the Titans
The Houston Texans and the Tennessee Titans face off this Sunday in a matchup of two teams whose last couple weeks have been disrupted in completely opposite ways. The Texans' season took a turn for the better, after an 0-4, when they decided to cut Bill O'Brien loose as head coach and general manager, and they took home a win on Sunday against Jacksonville. They are now 1-4.

The Titans managed to grab the win against the Bills, and now sit at 4-0. The Texans' season still sits on the brink at 1-4. There are tons of angles to this Sunday noon kickoff. Let's look at four of them right now....

4. Texans run defense REALLY getting tested
Through four games, the Texans had the worst run defense in the NFL. Hell, they had one of the worst run defenses in recent NFL history, giving up well over 180 yards per game on the ground. Then, last week, one big part of the Bill O'Brien malaise being lifted appeared to be the run defense getting some of its mojo back. They held Jacksonville's James Robinson to 48 yards on 13 carries, including just 15 yards on his final nine carries of the game. Now, the Texans go from featherweight back up to super heavyweight with Derrick Henry looking to bludgeon them into submission. In case you need a reminder of what Henry is capable of, well, here you go....

3. Continued evolution of Tim Kelly and Deshaun Watson
There's going to be a lot said and written about the aftermath of the Bill O'Brien firing, for many, many weeks, and perhaps the two people most affected by O'Brien's termination are offensive coordinator Tim Kelly and quarterback Deshaun Watson. Kelly is now free to call his plays without O'Brien looking over his shoulder like a helicopter parent, and Deshaun Watson can play looser and more freely. In the win over Jacksonville, the Texans were much more aggressive in their second half play calling than they normally would have been under O'Brien. This needs to continue. The frequent use of up-tempo needs to continue. Basically, everything that they weren't using under O'Brien needs to continue.

2. Arthur Smith, Texans HC candidate
The Texans intend to cast a wide net in finding their next head coach, and as a result, there's a good chance that one of the staff members of their weekly opponent could be in the mix for the Texans' head coaching job. That is absolutely the case this week, as Titans OC Arthur Smith SHOULD be a name that Cal McNair explores as a possible candidate. Smith has built one of the most prolific and efficient offenses in the league behind the power running of Henry, and more importantly, the rejuvenation of QB Ryan Tannehill's career. Since taking over as the starter seven games into the 2019 season, Tannehill is 11-3 as the starting quarterback, an identical record to Super Bowl MVP Patrick Mahomes over that same period of time. Smith is a big reason for that.

1. Jadeveon Clowney Reunion
This will be the first time the Texans have faced Clowney since Bill O'Brien decided to trade him to the Seahawks on August 31 of last year. Ironically, Clowney will likely spend a good chunk of the game lined up across from the player the Texans traded FOR on the same day they traded Clowney AWAT, left tackle Laremy Tunsil. Here is Romeo Crennel on matching up with Clowney:

As usual, Clowney's game in 2020 has consisted of very few sacks, and a whole lot ofexplaining how disruptive he is despite having no sacks.