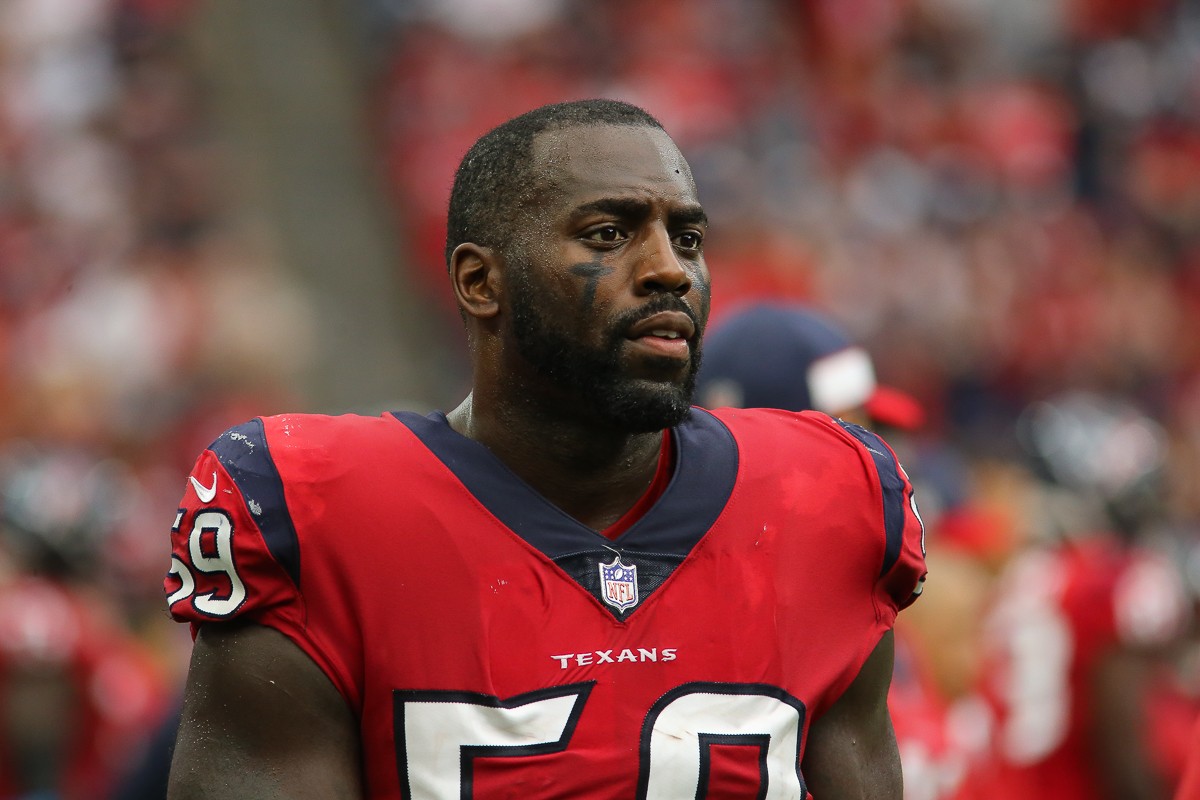 Photo by Eric Sauseda
Whitney Mercilus had another game where he was a no show.
Throughout last week, the betting line on yesterday's game between the Houston Texans and the Green Bay Packers at NRG Stadium hovered around three or four points, with the Packers as a small favorite. That caught some people off guard, as the Texans were a horrid 1-5 on the season, and the Packers were 4-1 (coming off their first loss of the season a week ago).

However, there were reasons to believe the Texans could compete with the Packers. They'd been 1-1 since firing Bill O'Brien, and were a two point conversion versus the Titans away from being 2-0. Furthermore, the Packers had one of the few defenses in football that you could argue is as bad as the Texans' defense. Hey, maybe it would be a shootout, and the Texans could get a couple turnovers, and get a big win, right?

As it turns out, the Texans are every bit the featherweight they appeared to be pre-O'Brien firing, and whatever sugar high they have from O'Brien being let go is now gone. They are just a struggling team, with a poorly built roster, a great (if only semi-interested, seemingly) quarterback, and nine more meaningless games to go. The David Johnson fumble, following a recovered onside kick, squelching any hope of a miracle comeback was the perfect way for this game to end.

The Texans have devolved into a punchline, and the comedy bit won't end until 2021, if that. Let's find the winners and losers in yesterday's 35-20 loss.

4. Davante Adams fantasy owners
Adams is already a "must start" every week, obviously, but perhaps Adams owners would be mildly concerned coming into this game that his numbers would be merely average, instead of eye popping, considering the path of last resistance against the Texans is on the ground, and not through the air. Well, it worked out just fine for Adams owners, especially once Bradley Roby left the game with a first quarter knee injury. Adams riddled the Texans' secondary, regardless of who was covering him, tallying a career high 13 catches for 196 yards and two touchdowns.

3. Jonathan Vilma
The Texans have no played two games on FOX this season, the Week 4 loss to Minnesota and yesterday's loss to the Packers, and that's because the two homes games each season versus NFC opponents are, by rule, played on the NFC's home network (which is FOX). I don't know if it's just coincidence, or if perhaps the CBS announcers are sensitized to the Texans' ludicrous play calling, but Brock Huard (Week 4's color analyst) and Vilma echoed the same sentiment — they felt sorry for Texan fans having to put up with the team's tone deaf play calling and insistence on cramming David Johnson (and his heavy legs and total lack of wiggle) into the offensive game plan. Preach, fellas!

Yesterday was a far different Texans' team, with a far different record (1-5, coming into the game), and yet his first half numbers (and ultimate outcome) were nearly identical — 16-21, 198 yards, 3 TDs.

The moral of the story is that it doesn't matter what season it is, nor what the Texans' record is. Aaron Rodgers playing in Houston owns the Texans, just like he did for most of Sunday.

1. Trade deadline junkies
So now the Texans are 1-6, and I would imagine their percentage chance of making the playoffs, which ere around four percent going into the game on Sunday, are now practically zero. It's time to start looking at what pieces to sell off and try to recoup some draft capital to begin the recovery from the destruction of the Bill O'Brien General Manager Era. They should be listening to offers for any players not named Deshaun Watson or Laremy Tunsil, and yes, that includes J.J. Watt, who might be the only asset (non Watson, non Tunsil) that would net any significant draft capital. This probably deserves its own post, but needless to say, whoever is handing the trade deadline for the Texans needs to start working the phones. Whitney Mercilus, Zack Cunningham, Will Fuller, Kenny Stills, Brandin Cooks. Take phone calls on all of them, and then some.

4. Deshaun Watson's potty mouth
Speaking of Watson, if you're wondering what stage of Texans futility we are at, we are at the "Deshaun Watson has taken up cursing" stage:


Haven’t updated this in a while, because redundant, but here goes ... in #Texans last 38 reg season gms w/ Watson starting, here is a first drive summary:


2. Whitney Mercilus
If you got to Whitney's game log on ESPN.com, where they show his stats for each game this season, it appears Whitney's only played in five of the Texans' seven games this season. That's because in two games this year, Baltimore in Week 2 and last week against Tennessee, Mercilus didn't register a single stat. Not a tackle, not a sack, not a QB hit, nothing, Zero. Zilch. Now, to be clear, yesterday he had ONE TACKLE, like he did against Jacksonville two weeks ago, so a couple of these games, he BARELY appeared, but still. Man, now that I think about it, his ESPN.com game log may be doing him too much justice. Mercilus is making $13.5 million per year, and he has two tackles in the last three weeks. Not two in each game (which would be awful already). TWO TOTAL.

1. Anyone looking for long form quotes from J.J. Watt
If you're wondering what stage of Texans futility we are at, we are at the "J.J. Watt is giving five word answers and wants to murder John McClain" stage:


J.J. Watt is not pleased. pic.twitter.com/NQIsAHhko5


Hang this press conference in the Louvre. pic.twitter.com/dO3Wsp4k7h