Doc Hails the Return Of the True King (Sorry, Elvis!)

Screen Grab/Cardinal Releasing
Chuck Berry appears in archival footage.
Usually, when a documentarian is prepping his film, it’s a bonus to have the subject not only still alive, but willing to participate. However, when that subject is the notoriously difficult rock and roll pioneer Chuck Berry, all bets are off. Especially given how Rolling Stone Keith Richards said of his idol in the 1987 Berry doc Hail! Hail! Rock ‘n’ Roll! “He gave me more headaches than Mick Jagger!”

Director Jon Brewer – who’s helmed previous films on B.B. King and Nat “King” Cole — knew this when he traveled to St. Louis some years ago to meet with Berry’s reps about attempting his own effort. He didn’t quite get a warm, open-armed reception, and the whole idea was dropped. 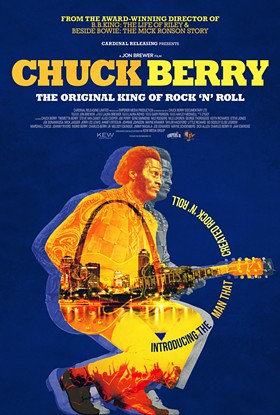 Cardinal Releasing Film Poster
But when Chuck Berry died in March 2017 at the age of 90, his estate was more open to the idea of a new documentary. And—shockingly so—his very private family, including wife Themetta. Thus, Brewer’s Chuck Berry: The Original King of Rock ‘n’ Roll (Cardinal Releasing) only came to fruition because its subject was dead and buried.

“Hail! Hail! Rock ‘n Roll turned into more about the concert portion, it wasn’t really a documentary with respect to his life,” Brewer says in a Zoom interview from his home in England. “And he was not an easy character, to say the least.”

The film says much about Chuck Berry, one of rock and roll’s originators who gave us such standards as “Maybellene,” “Rock and Roll Music,” “Roll Over Beethoven,” “Sweet Little Sixteen,” “Carol,” “Back in the U.S.A.,” “Reelin’ and Rockin’,” “No Particular Place to Go,” “Too Much Money Business,” “School Days” and more, including signature tune “Johnny B. Goode” (though ironically, his only No.1 hit was a live version of the novelty sexual innuendo song “My Ding-a-Ling” in 1972).

Elvis fans might take issue with the “King” portion of the doc’s title, and Little Richard fans might argue (as he himself did…loudly and often) that the Macon Screamer is the real “originator” of rock and roll. but Brewer has his own view on royal titles, shared by many of Berry’s fans, of the man who was the very first inductee into the Rock and Roll Hall of Fame.

“Chuck is the King because he wrote the songs and the music. And he performed it. Elvis never wrote. Chuck did it all. Little Richard, as Steve Van Zandt says, is the father and the mother. Little Richard was great, but Chuck was the all-arounder,” Brewer offers. “He created the teenager. I always thought they were around, but they weren’t! Chuck basically wrote another language with his lyrics about [teenage life] you didn’t have before.”

Brewer adds that Berry was a black musician who appealed to a white audience and white radio—with a lot of fans not even aware of his race. And all that duckwalking back and forth across the entire stage expanse? Brewer says that it was done so both sides of a segregated audience with a uncrossable rope line down the center could see him. Director Jon Brewer
Photo by Giles Edwards/Provided by Sicily Publicity
As a musician, Chuck Berry was fearless, stubborn, focused, and always wary of being taken advantage of. That led to an outsized anger and chip on his shoulder, along with demand to be paid – with cash in a paper bag – before even stepping onstage at any one of thousands of clubs, who also had to hire a pick up band to play behind him, usually with no rehearsal.

Racism and race issues also take center stage in the film. And while the documentary and history don’t shy away from Berry’s many brushes with the law and jail over the Mann act, tax evasion, business dealings, and pornography, there’s little doubt has he been a white man, the law would not have come down as hard as it did. Even as Berry was the architect of his own demise in many of the cases.

“Charlie Chaplin got accused of the exact same thing with [a teenage girl], but he was never going to go to jail. But Chuck was Black. It put him through the ringer,” Brewer notes. “America is a strange country to me, it has so many different moralistic views in different parts of the country. Chuck was deemed guilty immediately, for a lot of reasons that didn’t have anything to do with him. But he pushed the boat out too far, unnecessarily. If his attitude had been a bit [better], things might [have gone better] for him.”


Berry possessed a voracious sexual appetite, usually preferring younger white women, and did little to hide it from Themetta. Brewer notes he even had two of his mistresses living on his property (but away from the family home) at the same time. Without Berry to bar her from being interviewed or pull the plug when the questions got too sensitive (as he did memorably in Hail! Hail! Rock ‘n’ Roll), she did talk to Brewer’s cameras, albeit dancing around the subject.

“She’d rehearsed answering a lot of questions she thought I would ask, but I didn’t. I had to be very sensitive. I thought 'She’s such a nice person, how was I going to get around this?' But she answered it without me really asking. She said ‘I loved Chuck and Chuck loved me.’ And she showed me the ring and a said ‘We were in it all the way.” The Berrys were married for 69 years when Chuck died.

“To be honest with you, my take on it was when Chuck walked into his home after being on the road, he became Charles Berry. And Charles Berry was an astute father, and kind man, and loved his wife,” Brewer says. “And when he left again, he became this character called Chuck Berry. And he was going to do what he wanted with whomever out on the road. It was separate to him.”

Themetta and Chuck Berry, early in their marriage.
Screen Grab/Cardinal Releasing
There are also interviews with the Berry’s children and grandchildren, including daughter Ingrid, who performed with her dad for 20 years and was still very emotional at the time of filming.

Berry himself appears in archival footage, and Brewer uses some filmed atmospheric recreations awash in exotic color hues. He also lines up an A-List of talking heads to discuss Berry’s life and music. That includes original interviews with George Thorogood, Steven Van Zant, Johnny Rivers, Joe Bonamassa, Alice Cooper, Joe Perry, Nile Rodgers, and Gary Clark, Jr. But the biggest surprise to him was the passion show by a more unlikely source.

“I was quite surprised at Gene Simmons from KISS! He had such a knowledge of Chuck and insisted on being interviewed. We talked for about three hours!” Brewer says.

The film also has footage of Simmons speaking at Berry’s funeral, as well as rare footage of some of Berry’s very last shows done at his own club in St. Louis.

As John Lennon once famously said, “If you had tried to give rock and roll another name, you might call it Chuck Berry.” But save for the playlists of Sirius XM’s ‘50s on 5 or Underground Garage channels, or their appearance in film, TV shows and commercials (Berry’s perennial holiday hit “Run Run Rudolph” is currently in a national ad campaign for Dick’s Sporting Goods), the music of Chuck Berry is not often heard in wider culture today.

But according to Brewer – and the film – it’s really always there. “Look at his influence on the Beatles, the Rolling Stone, and the Kinks. They all [covered] his songs. And they in turn influenced others,” he sums up. “Bands have always played Chuck Berry music. And they always will.”

Chuck Berry: The Original King of Rock ‘n’ Roll, is currently available on multiple streaming/rental platforms and DVD. It will be available on Blu-Ray beginning November 27.
California Privacy Policy California Collection Notice
Do Not Sell My Info
Use of this website constitutes acceptance of our terms of use, our cookies policy, and our privacy policy The Houston Press may earn a portion of sales from products & services purchased through links on our site from our affiliate partners. ©2022 Houston Press, LP. All rights reserved.