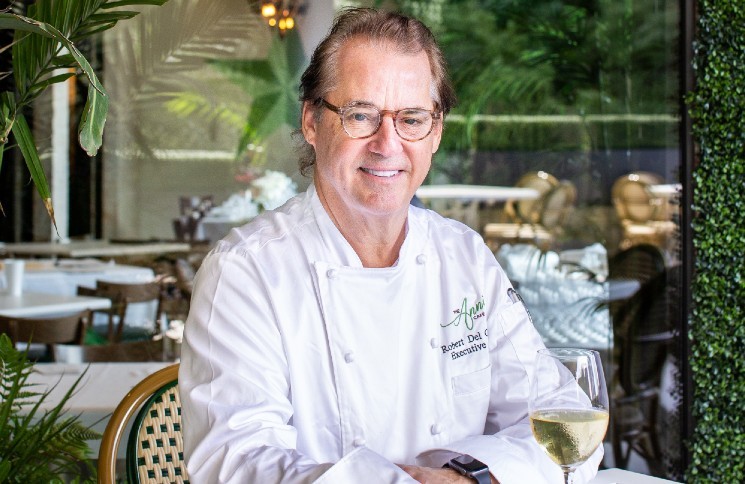 
This week, Houston Press is showcasing local food professionals who are also musicians. We asked how their culinary and music lives intersect and how those experiences ultimately make your dining experience a better one. Each shared what’s new at their establishments and reminded folks that Houston eateries are open and eager for business. And, they all spoke at length about the music they perform and love. Today's installment features acclaimed chef and veteran blues guitarist, Robert Del Grande.

Robert Del Grande said the best cooking is often like the best guitar playing. A few perfect ingredients are like a few great chords. The magic comes from “putting two things together to make them taste like five.”

“It takes a lot of confidence to play simply and it takes a lot of confidence to cook simply. I’m just going to use three ingredients and that’s it and I’m going to get the most out of it,” he said. “Sometimes it’s like, I’m not going to play all the strings all the time. I’ll play two of them or one of them, or even better, none of them, as I tried to explain once and didn’t get a reaction. You can play none of them, if you want. Just let the space be and listen to the reverb a bit as it ricochets around the room."

That can be applied to food too, he said. Crowding a plate with bold flavors or expensive ingredients doesn't necessarily make it better.

“Sometimes you have to back off a little bit to create some space to let things breathe a little bit,” he reasoned. “Sometimes that one simple flavor that has room to move and room to breathe is better.”

Of course, Del Grande is speaking from a wealth of experience, as a chef and a guitarist. The executive chef and partner of The Annie Café & Bar is a 40-year industry veteran and James Beard Award winner. His restaurant group has brought forth favorites like Café Express, Taco Milagro and The Grove and The Lake House, two restaurants located at Discovery Green.

Del Grande’s career has been buoyed by music pursuits, most notably his work in the chef-driven band The Barbwires. You can Google his culinary accomplishments – Food & Wine’s Honor Roll of American Chefs, Houston Culinary Awards’ Chef of the Year, induction into Who’s Who in American Cooking – and, you can also search for his recorded music on iTunes and other streaming platforms.

It all started with a different instrument at a different time. Del Grande said he joined the school orchestra in seventh grade.

“So, I went down to the music department and they needed French horns in the orchestra,” he recalled. “I remember, the teacher opened the case and there was this bright, beautiful, brass French horn I thought was the most glorious thing I’d ever seen.”

He began music lessons and learned to read music and realized in high school “the number of cool French horn players was pretty limited. I thought John Entwistle in Tommy was going to save us all with the French horn parts there, but that didn’t catch. So, I realized, if you’re not playing guitar, you’re never going to be cool.”

He started with acoustic guitar, following the singer-songwriter path set by Bob Dylan and Crosby, Stills, Nash & Young, but “at some point we all realized to be legitimate, you had to be a blues player, so we all then suddenly wanted to be blues guys.”

Music was a healthy diversion during his college days in the 1970s. He’d earned his Bachelor of Science in chemistry and biology and started pursuing his Ph.D. from University of California at Riverside, intent on a career in medicine. He and a friend started a blues band and that group taught him some valuable lessons about the work world.

“We had this oddball band. I was playing acoustic guitar, he was playing a Les Paul and we had a singer. We didn’t have any drummers or a bass player. We were like the oddest blues trio you’ve ever seen,” he said. “Even today I’m still in touch with those guys and I’ll say, ‘You know, we were at university, did it ever occur to you to put up a sign in the dorm that said, ‘Need a bass player. Looking for a drummer.’ That kind of thing?’”

“I was not only the rhythm guitarist, I was also the bass player and the drummer because I had to generate everything for the lead guitarist,” he said. “It taught me a lot about how to get away with nothing.”

Keep it simple. Do more with a few solid ingredients. Another lesson from those days - “We always said, if we’re not having a good time, forget it. We would drink scotch whiskey and play blues numbers. For us, it was food, music and the university. Those were the only three things that we ever did.”

After graduation in 1980, Del Grande moved to Houston while courting his girlfriend, Mimi. Her sister and brother-in-law had opened Café Annie two years earlier. Del Grande said he started working there “for fun” and before long he was the acclaimed restaurant’s executive chef and partner. His star began to rise but he still found time for music.

“With the rise of American cooking, southwest cooking, I met Dean Fearing from Dallas. I didn’t know he played guitar and he didn’t know I played guitar,” he said. “My wife, Mimi, she’s my wife now, he’s talking to her. Apparently, this is how the story goes. He tells her, ‘Oh, Robert, he’s such a great guy,’ and she said something like, ‘He would be if he’d just put that damn guitar away.’ And Dean said, ‘Well, what kind of guitar?’ and she said, ‘Some Martin or something.’ And he just looked at her and walked off. I’m on the other side of the room, it’s some kind of reception, and he comes up to me — ‘Dude, dude, dude — you've got a Martin guitar?’”

Fearing is a celebrity chef in his own right, with Food Network cred. He also owned a Martin guitar, he told Del Grande. They all but started The Barbwires that night. Fearing is the band's lead guitarist.

“As the rumors started to spread, people kind of came out of the woodwork,” Del Grande said of fellow musicians who are also in the food business, people who sometimes sit in with the band. “I think like most (blues bands), we probably had too many harmonica players there for a while. I have nothing at all against harmonica players. They just don’t have to schlep much. You know, they just show up with a little box. Everybody else is just dragging their equipment around, you know?”

The band has attracted blues harpists like fellow southwest cuisine guru Norman Van Aken and Mickey Raphael, from Willie Nelson’s band. Because the stage tends to get a bit crowded with new Barbwires, Del Grande and Fearing have created a new duo dubbed The Blue Williams.

“We’re still doing it, still trying to have some fun,” Del Grande said. He also filled us in on the latest news from The Annie. The restaurant is open for lunch and dinner and will be open for “a fun menu for Thanksgiving,” he said.

“And with the weather now, the patio is just unbelievable with this beautiful weather. There’s nothing like eating outside. Otherwise, even though it’s the pandemic era, we keep moving ahead."

“So, in the end, you can’t really point to a flavor, a taste or smell or something. You sort of perceive it,” he said. “When you and I talk about the flavor of vanilla, we use symbols like the word ‘vanilla’ but the actual experience is hard to put your finger on and music’s the same way. You can notate it, like ‘That’s the C chord.’ Okay, fine, but you’re still one step away. You can’t quite put your finger on it.

“There’s always that piece that you hear musicians talk about – finding that right note, that right chord, that right sound. Food and taste are very much the same way, it’s less pointing at it than having the feel of it.”
California Privacy Policy California Collection Notice
Do Not Sell My Info
Use of this website constitutes acceptance of our terms of use, our cookies policy, and our privacy policy The Houston Press may earn a portion of sales from products & services purchased through links on our site from our affiliate partners. ©2022 Houston Press, LP. All rights reserved.