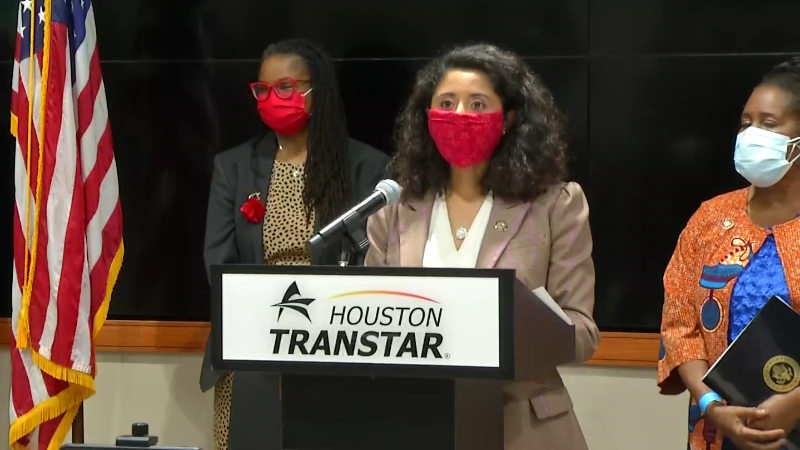 Screenshot
Harris County Judge Lina Hidalgo begged county residents to stay home for Christmas to prevent the spread of COVID-19.
In a pre-Christmas Eve press conference, Harris County Judge Lina Hidalgo urged county residents to stay home for the holidays and limit any Christmas or New Year’s Eve celebrations to within their immediate households given the troubling upticks in local coronavirus metrics over the last few months.

“Right now, in the holiday season, as the virus rages on around the nation and our state, we face the greatest challenge yet,” Hidalgo said. “In our hospitals, the numbers in the ICU have not stopped creeping up. All across Texas, communities are entering danger territory. The current situation where our medical center — the largest in the world — is routinely crossing its base capacity, means that procedures are postponed, that healthcare workers are at risk of burnout, that we can’t sustain a surge in infections beyond where we are right now, and that we’re living at the very, very edge.”

“The way to show your loved ones that you love them this holiday season is to stay home, to put your plans on hold this year,” she continued.

The Houston Health Department reported an additional 634 cases of COVID-19 on Wednesday and two new deaths within the city of Houston. As of 4 p.m., Harris County had recorded a total of 224,245 coronavirus cases and 2,605 deaths from the disease.

Hidalgo and Turner said that they’ve both discussed the possibility of issuing a local curfew order if the coronavirus begins to spread even more rapidly and we get closer to a point of no return, but the two local officials said they agree that this type of sweeping restriction isn’t necessary — yet.

“The curfew is a very blunt tool that we have — pretty much the last tool that we have — and so we want to make sure to deploy that in a very worst case scenario… Right now, we’re at a point where if people do their part, we can still turn things around,” Hidalgo said. “It’s not a foregone conclusion that we’re headed into a completely unsustainable place, but we’re very close.”

Turner also had harsh words for the Houstonian who attacked an employee at Grand Prize Bar earlier this week after being asked to wear a face mask as required. The disgruntled maskless patron attacked the employee in the head with a glass, sending the bloodied bar worker to Ben Taub hospital where he needed ten stitches.

“We are aggressively looking for this individual. We want to find this individual, we want to find him and arrest him and bring charges against him,” Turner said. “Quite frankly, I view it as almost like attempted murder, myself. But this type of foolishness is not going to be accepted.”

Wednesday’s press conference came on the heels of new forecasts from the Children’s Hospital of Philadelphia’s PolicyLab which projected that Houston could soon become a nationwide COVID-19 hotspot if an expected surge in coronavirus spread comes after the holiday season.

By Monday in that region, the number of hospital patients with the coronavirus had been over 15 percent for seven straight days. As required by Gov. Greg Abbott’s statewide reopening guidelines, areas of Texas that sustain those high levels of hospitalizations for a week straight have to roll back business occupancy levels to 50 percent, shut down any bars that haven't been reclassified as restaurants through a TABC loophole and halt elective surgeries.

“By the time you get there, you’re really in a tough position, and so to see our neighbors reach that is concerning,” Hidalgo said, before warning that if Harris County residents let their guards down, our area could easily hit that scary milestone.

“It is a very real possibility that we could end up facing the fate we’ve avoided thus far. But look, we have avoided it because of our ability to do our part, to take that personal responsibility, to be realistic about how this virus spreads, and that’s why we’re not mincing words today,” she said.

“Please,” Hidalgo continued, “no gathering for the holidays, no gathering for New Year, and continue to remember: the moment you are with somebody you don’t live with and you’re taking off your mask, you are at risk of spreading the virus.”
California Privacy Policy California Collection Notice
Do Not Sell My Info
Use of this website constitutes acceptance of our terms of use, our cookies policy, and our privacy policy The Houston Press may earn a portion of sales from products & services purchased through links on our site from our affiliate partners. ©2022 Houston Press, LP. All rights reserved.