The Human Cost Of TxDOT’s I-45 Expansion Plan 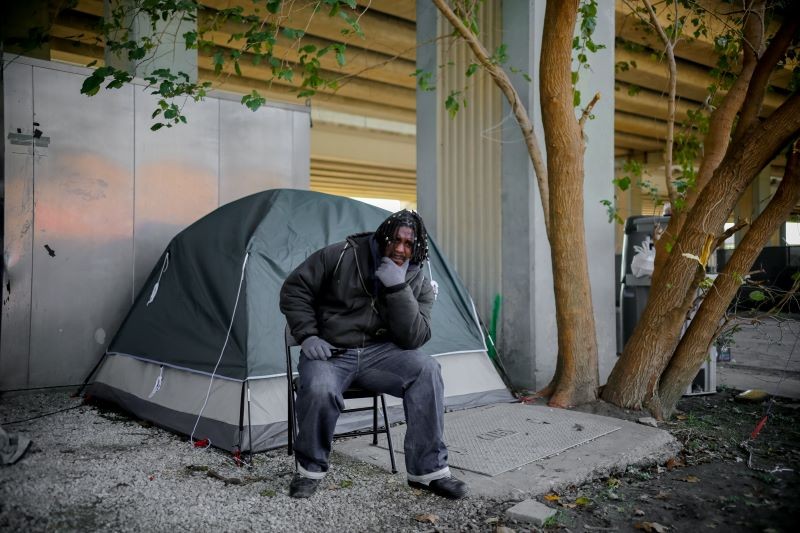 Photo by Doogie Roux
Chris Sonnier, homeless and living in a tent downtown, would be caught in the path of TxDOT's I-45 expansion plan.

Chris Sonnier spends his nights sleeping in a grey tent underneath Interstate 59 on the northern edge of downtown when he isn’t crashing at his uncle’s place in the Kelly Village public housing project in Fifth Ward.

Out of work and homeless, he’s definitely in a tough spot. But if the Texas Department of Transportation’s plan for expanding nearby Interstate 45 in the greater downtown area goes forward, Sonnier knows he’ll be in even more dire straits.

Christened the North Houston Highway Improvement Project by TxDOT, the highway expansion would render a large chunk of downtown where Sonnier and other homeless Houstonians hang their hats an inaccessible, construction-riddled mess.

On top of that, the highway construction would tear through Fifth Ward and lead to the demolition of Kelly Village and the nearby Clayton Homes housing project, and a whole swath of small businesses in East Downtown would be forced to shut down or relocate.

“Most definitely it’s gonna have an effect on where I’m staying, because I don’t have anywhere to stay except for my uncle’s house and my little tent up under the bridge,” Sonnier said.

He sees this big budget highway expansion — estimated to cost around $7 billion — as another example of poor, minority communities in Houston getting steamrolled for the benefit of the upper-class. To Sonnier, whose family has a long history in Fifth Ward, TxDOT’s plan will end up paving over even more Black history that’s far too often forgotten.

“That’s not right. So you’re telling people that we’ve got to abandon a lifelong, 30-40 years of memories, 50-60 years of memories… so our old memories gotta die for your new memories to be born?” he said. “That’s history… history that don’t get talked about in the history books.”

TxDOT’s I-45 expansion project has been in the works for years now. The current plan would widen the highway around downtown and add additional traffic lanes to make for faster commutes, do away with the Pierce Elevated section of I-45, and bury a portion of the highway that runs along the St. Emmanuel corridor in East Downtown. 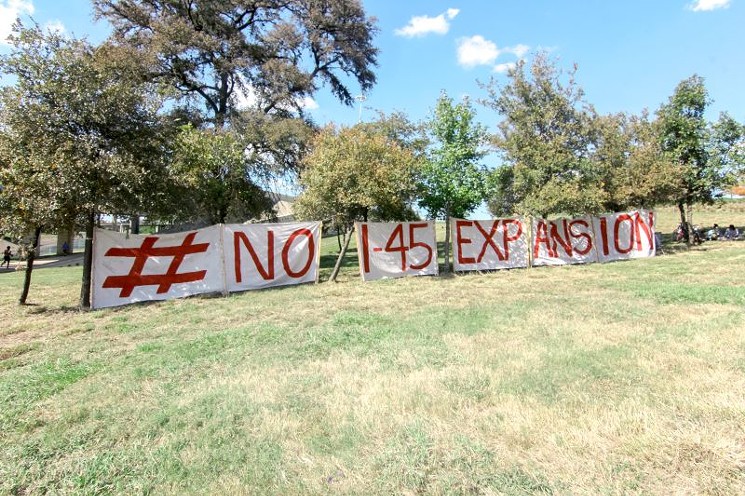 Stop TxDOT I-45 is one of several local groups who claim TxDOT's I-45 plan will disproportionately harm the poor and minority communities.
Photo by Doogie Roux

TxDOT claims these changes are necessary “to create additional roadway capacity to manage congestion, enhance safety, and improve mobility and operational efficiency” of the highway in the decades ahead.

But local grassroots groups like Stop TxDOT I-45 and public transportation advocates LINK Houston oppose the project on the grounds that those benefits don’t outweigh the harm it’ll cause for poor, minority Houstonians and small business owners caught in the path of construction.

“Typically with TxDOT and typically when it comes to highways, there’s very little landowners can do to stop the project,” said Justin Hodge, a local attorney who represents clients whose land the government is entitled to buy up for public use projects due to eminent domain law.

In addition to teaching eminent domain law at the University of Houston, Hodge said he’s also currently representing several clients who want to make sure they get as much compensation as possible from the government for their land in the way of TxDOT’s I-45 plan, including several fast food restaurants and hotels.

While Hodge's clients have the means to fight the state to get as much cash compensation as possible for being stuck in the way of the redesigned highway, most local residents caught in TxDOT's crosshairs aren't as lucky.


A Neighborhood Scheduled for Erasure

Termaria Bartley is one of the thousands of Houstonians in public housing whose lives will be upended by the I-45 expansion. Unable to work due to chronic health issues, she depends on disability assistance to make ends meet for herself and her four children, who all live together at Kelly Village.

Bartley’s heard her building is directly in the way of the new proposed highway route, and even though she’s been told she’ll have to uproot her family, she still has no idea about when that’ll be or where they’ll go.

“From my understanding, they’re starting to tear down certain stuff already for this intersection to run through here,” Bartley said. “So at this moment, I really don’t know where I am gonna go. I’m lost and I’m confused. I’m lost.”

While Bartley is worried about what she and other Kelly Village residents will do once they get their final eviction notices, she’s most concerned about homeless Houstonians like Sonnier. Even though she’s skeptical it’ll come through in the end, she’s at least been told that public housing residents like her will get some financial help to relocate once they’re finally displaced, but what about her homeless neighbors just down the way who are even less lucky than her? 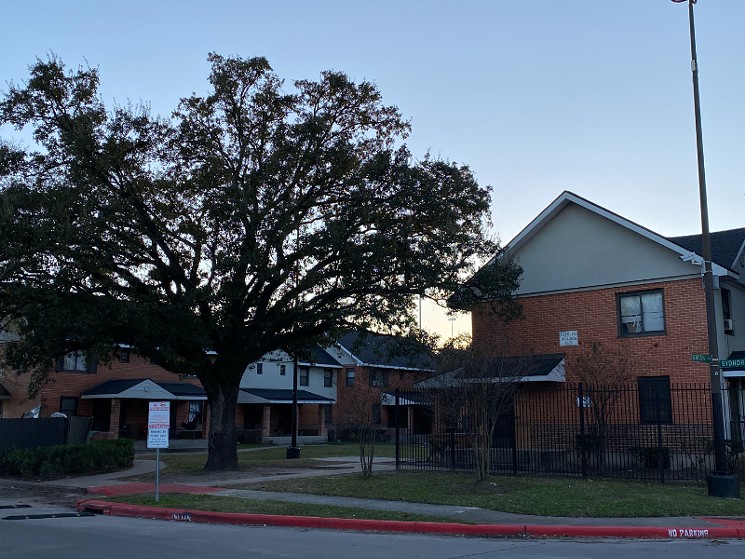 Residents at the Kelly Village public housing project are right in the path of the I-45 expansion and will be forced to relocate.
Photo by Schaefer Edwards

Further south, East Downtown business owners like Michael Duckworth, CEO of True Anomaly Brewing Company, are now having to game-out their relocation plans in a world where there still isn’t clarity around exactly when construction would even start. Duckworth has been active in opposing the I-45 project and has attended several Stop TxDOT I-45 meetings over the past couple of years.

“Obviously, we’re not a huge advocate of it happening, mainly because it will displace us but also the whole neighborhood and tracts there along that corridor of St. Emmanuel in general,” Duckworth said.

Back in 2016, Duckworth had heard rumblings about a potential highway expansion project that could affect East Downtown when he first negotiated the lease for the property True Anomaly now sits on.

He made sure the lease he agreed to had some reassurances from the owner that’d help cover the costs associated with any highway construction-induced relocation, but he’s still daunted by the prospect of finding a new home for his company so soon. Duckworth said he really wants to keep True Anomaly in the neighborhood that’s supported the brewery since it opened two years ago, but doesn’t know if that’ll be possible.

“It seems like at some point the city made the decision to reestablish that area really with the building of the Dynamo stadium to reinvigorate and get business, commerce, residents and everybody else excited about it,” Duckworth said. “And quite honestly, it seems like it’s kind of come to fruition in the past ten years or so since they did that, and this kind of seems to go in the opposite direction of that.” 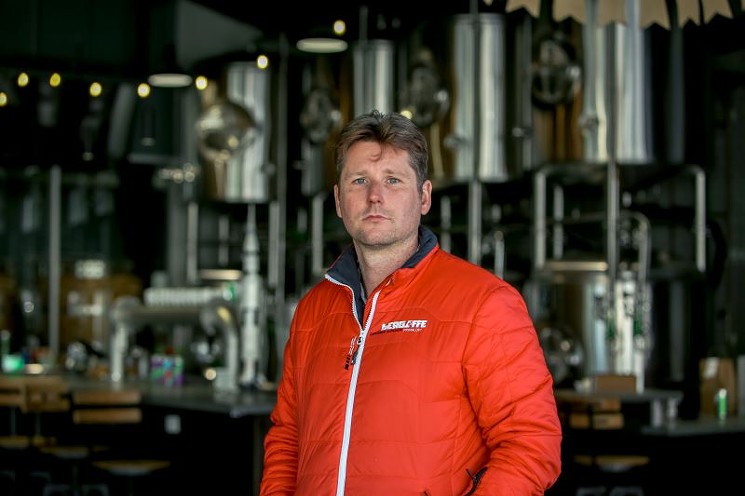 Michael Duckworth, True Anomaly Brewing Company's CEO, is worried his business might have to leave East Downtown due to TxDOT's highway plans.
Photo by Doogie Roux

Politicians Argue For Tweaks to the Plan

U.S. Representative Sheila Jackson Lee asked for more time for the public to give feedback on the I-45 plan, and successfully got TxDOT to extend the comment deadline from December 9 to December 18. Houston Mayor Sylvester Turner also publicly criticized the project right around the original deadline.

“This project can be transformational and can achieve the City’s and TxDOT’s objectives. The project, however, has shortcomings that must be addressed and impacts that must be further mitigated to maintain my support,” Turner wrote in a December 8 letter to TxDOT. His main concern was about increasing funding for affordable housing for the displaced low-income Houstonians.

Jackson and Harris County Commissioner Adrian Garcia also signed a separate letter in early December criticizing the I-45 project. “It appears that community feedback and agency coordination has been a perfunctory effort that has resulted in changes only at the margins, with the result being a predetermined design outcome independent of public input,” the letter read.

Attorney Hodge said that complaints like these could lead TxDOT to make a few small concessions in the plan, but doesn't expect much of a chance of significantly altering the project this far down the road now that the public comment period is officially over.

“You will see minor tweaks to it, but I think it’s pretty close to final would be my prediction,” Hodge said. “Specifically related to the route selection, I don’t think you’ll see any significant changes at this point.”

Hodge also predicted that an expected federal infrastructure legislation push from President-elect Joe Biden once he gets into office in mid-January would likely speed up the timeline for construction to begin since the I-45 expansion is the kind of “shovel-ready project” typically prioritized by big Congressional spending bills in the past. If that comes to pass, construction could begin as soon as late 2021.

Sonnier, an aspiring rapper, said he’s working on a song based on a speech he gave at a recent Stop TxDOT I-45 meeting to rally opposition to the project. He hopes it’ll help spread awareness in the community about the pain and frustration that’ll be inevitable if TxDOT’s plans go ahead as currently constructed. Despite the low odds of slowing down the project’s momentum at this point, he said he doesn’t have a choice but to keep fighting.

“Nah, I can’t do that,” he continued. “I’ve got dreams and aspirations, and in order to fight for my dreams and aspirations, I’ve gotta fight for that.”
California Privacy Policy California Collection Notice
Do Not Sell My Info
Use of this website constitutes acceptance of our terms of use, our cookies policy, and our privacy policy The Houston Press may earn a portion of sales from products & services purchased through links on our site from our affiliate partners. ©2022 Houston Press, LP. All rights reserved.