A Day In The Life With Mr. Record Man Clint Broussard 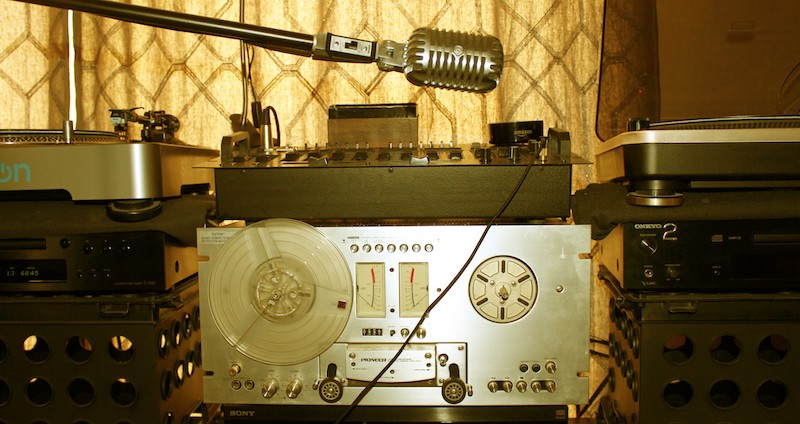 Throughout 2020, a year where nothing was certain, Broussard’s presence and familiar voice was a constant source of entertainment and comfort for those listening where he provided comic relief, history and of course, amazing music.

“As nice as everyone has been about listening and being thankful that I'm still doing it, I don't know what I would do without them either because I do it from home and it's something that keeps my mind busy,” says Broussard.

Both shows intertwine Broussard’s natural knack for storytelling and humor with his vast musical expertise and extensive record collection, but each show has its own flavor.

Blues in Hi-Fi focuses on the earliest days of rhythm and blues and swamp pop with an emphasis on the Gulf Coast whereas on his podcast, he can play everything from Rick Nelson to Radiohead and has the freedom to divulge.

No matter what music Broussard is playing, he is always quick to fill listeners in on the behind the scene stories of artists and tie the history back to Houston admitting that he is always on the quest for new information which in turn influences future themes in his shows.

“My main thing was I wanted to be educational and share things with people that I was really turned onto. My record collection is crazy, I’ve collected all my life,” says Broussard who has thousands of records.


“My main thing was I wanted to be educational and share things with people that I was really turned onto."


“I’ve worked in record stores my whole life because I just know all about it and I also love learning about it and that to me is the greatest resource ever.” He describes how his mother and father would hold dance parties in their home while spinning their own record collection.

Broussard has also received an almost life long education in radio beginning in his early years working the booth at Rice University when it was still available on the FM dial. It was there that he took over for a long time blues show and made it his own thing until Rice sold its station and went completely digital.

People began requesting his show, but unknowingly to the wrong station, calling KPFT’s station manager asking to bring back his blues show. It was then that KPFT offered Broussard a one-hour time slot during drive time, an hour usually reserved for news and current events.

“I look at my Blues in Hi-Fi show as kind of an homage or tribute to everything that I loved about radio when I heard it as a kid, be it college radio or Wolfman Jack. It's my modern day tribute to the golden age of radio but while doing my best to continue running it up the fields ”

In 2016 Broussard, inspired by an idea to write a book about his experiences in radio while incorporating his musical expertise, decided to start his podcast. That same year it was voted best podcast by Houston Press readers. "My approach to podcasting is a radio approach," says Broussard. 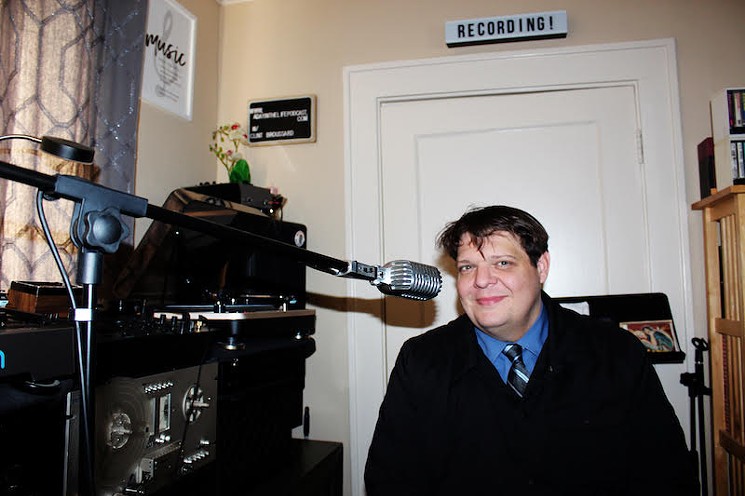 Broussard has thousands of records to pick from and create his shows at home.
Photo By Gladys Fuentes
A Day In The Life maintains a literary and autobiographical element set to the soundtrack of Broussard’s life allowing the audience to seemingly rifle through his massive stacks of vinyl. His stories and sound bites, ranging from old advertisements to spoken word, never take away from the great music but instead add another element of depth and a thematic quality to his show.

Recently, Broussard has intentionally added a muffled backdrop of chitchat and socializing to his show, which he has had to point out to listeners is not real. “I have this because it's such a cool environment. It opens it up and it makes you feel like you're amongst people but it's also my prayer and my hope that we hear this and experience it again in this year.”

This year Broussard has also invited close friend and local musician Mike Stinson to pull up a seat and join the show. Their conversation morphed from a one-episode guest to a five-part feature where Stinson shared demos of unrecorded songs and discussed his latest single “Close Enough For Government Work.”

“It felt like we were just hanging out really talking and it was like everybody could listen in and stop by and have a beer or something,” says Broussard. Both men had plenty of experience sitting around talking shop, but this time they did it with a purpose.

“I shudder to think of the hours cumulative that we've done that so I’m glad that we did something productive with that and got some of it recorded,” says Stinson.

“He plays those songs that are all a minimum of 50 years old, most of them more than that, and that could be a dull show with some old fud playing records from 70 years ago, but it’s not because he makes it so fresh and cool with the way he sets it up and all the interesting tidbits he includes. Man he digs deep on his stuff,” says Stinson.

Adding, “I love his show so much and he ties everything back to the city of Houston. It’s a real point of pride, his radio show makes me proud to live in Houston.”


"His radio show makes me proud to live in Houston.”

Broussard credits his approach to including a guest not only in conversation but also in song selections for the show, to a phone call he received more than 20 years ago from a fellow Texan, Billy F. Gibbons who had caught his show on Rice radio.

Gibbon’s rep called Broussard and left a message on his answering machine, which Broussard was certain was a prank, but when he called back he got the one and only Gibbons himself. After Broussard made him prove his identity with a serious security question, Gibbons agreed to join him to co-host an episode of his show.

As someone who has seen the ever changing landscape of radio and openly celebrates the past, Broussard is surprisingly unafraid of the future and instead embraces it.

"I love that that movement happened," he says of the growing consumption of podcasts, "I was really worried that it was going to be trendy and then it was just going to go away and podcasting, it seems to have legs. I'm hoping it's going to be around a while."
California Privacy Policy California Collection Notice
Do Not Sell My Info
Use of this website constitutes acceptance of our terms of use, our cookies policy, and our privacy policy The Houston Press may earn a portion of sales from products & services purchased through links on our site from our affiliate partners. ©2022 Houston Press, LP. All rights reserved.