As Winter Blast Descends, Hidalgo and Turner Say It's Time To Hunker Down [UPDATED]

The snow stuck its landing in Buffalo Bayou Park.
Photo by Reginald Mathalone
Update 9:10 a.m.: Residents experiencing power outages got some sad news this morning. These are not rolling blackouts of 15 minutes in duration as had been predicted to occur. These are actual outages caused by ice and extreme cold conditions that crews will have to repair with no timetable on when power will be restored.

According to Eric Berger at Space City Weather he was told that the Electric Reliability Council of Texas had to take several power generating plants offline.

In a joint news conference Sunday evening, Harris County Judge Lina Hidalgo and Houston Mayor Sylvester Turner told local residents an unprecedented wave of winter weather has already begun to descend on the Houston area, and that the time to stay home is now.

“The window to prepare for this historic storm has closed,” Hidalgo said. “The time to hunker down is here. This is the beginning of an incredibly challenging couple of days for our region.”

Another view
Photo by Stuart Folb
Hidalgo begged locals to stay off the roads until Tuesday morning at the absolute earliest because icy highways could easily lead to nasty accidents. “We already had ten cars stranded on 290 and Highway 6 this morning, and that’s just a preview of what’s to come,” she said.

Temperatures in the Houston area had already fallen significantly and precipitation had already begun by Sunday afternoon. That prompted METRO to suspend local public transportation services as of 7 p.m.; the agency had previously announced its services would be shut down from Monday through at least Tuesday morning.

In a post just after 4 p.m. Sunday, Space City Weather’s Matt Lanza wrote that the major winter storm was already underway, and said the most recent forecasts “continue walking a fine line between ice, an even mix of ice, sleet, and snow, and a bigger snowstorm in the Houston area.”

Turner sounded particularly worried about the potential for widespread power outages across the state due to the massive number of Texans cranking up their heaters. He said that the Houston area could possibly see local blackouts as soon as Sunday night.

“There are three risk periods: this evening, Monday morning and Tuesday morning,” Turner said. “Those are the three time periods where there could be rolling blackouts,” he explained, which he said could last “anywhere from 15 minutes to an hour.”

Reliant sent out an email to its customers Sunday afternoon asking that folks make a concerted effort to conserve energy over the next couple of days, and highlighted the hours of 6 - 10 p.m. Monday and 5 - 9 a.m. Tuesday as times Houston area residents should be especially mindful to use less energy to stave off potential power outages.

According to the Electric Reliability Council of Texas (the state’s power grid operator), Texas’ electricity infrastructure was already experiencing record-breaking demand as of Sunday night.

In a Sunday news release, ERCOT recommended the following tips to reduce electricity use over the next few days:

Turn down thermostats to 68-degrees.

Close shades and blinds to reduce the amount of heat lost through windows.

Turn off and unplug non-essential lights and appliances.

Businesses should minimize the use of electric lighting and electricity-consuming equipment as much as possible.

Large consumers of electricity should consider shutting down or reducing non-essential production processes.

Turner specifically recommended that people keep their thermostats at 68 degrees for the next couple of days to lessen the strain on our power grid (a four-degree dip from his recommendation on Friday).

Hidalgo and Turner both stressed that they want to preserve the several warming shelters across the area for locals who don’t have a place to stay, and asked people who do have a roof over their heads to try and bundle-up and stay home even if their power and heating goes out in the days ahead. If absolutely necessary, Turner said residents can call 2-1-1 or 3-1-1 if they're in need of shelter during the winter storm.

Turner said that the city’s warming shelter at the George R. Brown Convention Center was “already pretty much at capacity” before Sunday’s press conference began. He and Hidalgo both said the city and county have several other shelters up and running, but aren't sharing those locations publicly to make sure they have enough capacity for the region’s homeless population. Turner also mentioned that Joel Osteen’s Lakewood megachurch has opened its doors as a shelter during the storm as well.

On Saturday, Gov. Greg Abbott warned that all Texans need to be prepared for a bout of winter weather the likes of which our state hasn’t seen in decades. Abbott issued a preemptive disaster declaration on Friday for all 254 counties in Texas due to the coming Arctic onslaught. He thanked President Biden "for quickly issuing a Federal Emergency Declaration for Texas.

“Every part of the state will face freezing conditions over the coming days,” Abbott said Saturday, “and I urge all Texans to remain vigilant against the extremely harsh weather that is coming. Stay off the roads, take conscious steps to conserve energy, and avoid dangerous practices like bringing generators indoors or heating homes with ovens or stovetops.”

Several icy patches had already popped-up on local roads by Sunday night.
Screenshot
By Sunday evening, Houston's TRANSTAR online traffic map already showed several reports of icy roads in the western reaches of the greater Houston area as well as the southern part of the 610 Loop.

Fort Bend County Judge KP George’s office announced Sunday that all county facilities will be closed through Monday due to the winter storm. All Fort Bend County health department COVID-19 testing and vaccination sites will also be closed Monday and Tuesday, and appointments for those days are being rescheduled.

“Let me be clear: Please stay off the roads,” wrote George in a statement. “Our emergency personnel, law enforcement, first responders, and many are in place and working 24/7. If we avoid getting on the roads until the weather passes, they don’t have to risk their lives to rescue us.”

Turner and Hidalgo previously announced that all city of Houston and Harris County COVID-19 testing and vaccination sites will be closed at least through Tuesday.

Hidalgo warned that the worst weather is yet to come. “It is going to get colder through every corner of the county as each hour goes by. The latest models show temperatures in the teens tomorrow into Tuesday,” she explained.

Can we say understatement?
Photo by Jack Gorman

Don't know that anyone is going to be by to pick up that mattress today.
Photo by Tessa Chronister

Not much trading going on today.
Photo by Schaefer Edwards

As light breaks through the clouds, will snow melt be a good or bad thing?
Photo by Schaefer Edwards 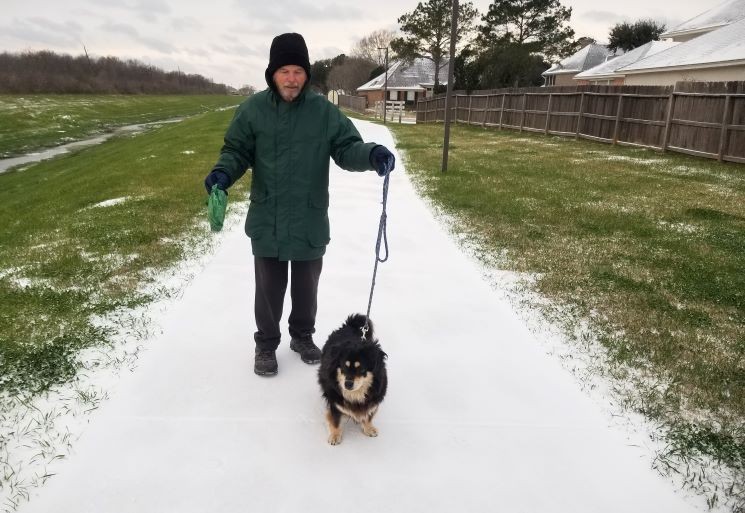 And then there's business that must be done no matter the weather.
Photo by Margaret Downing
California Privacy Policy California Collection Notice
Do Not Sell My Info
Use of this website constitutes acceptance of our terms of use, our cookies policy, and our privacy policy The Houston Press may earn a portion of sales from products & services purchased through links on our site from our affiliate partners. ©2022 Houston Press, LP. All rights reserved.