Photo by Mark Weiss/Courtesy of Chipster PR
Black Sabbath in the early '80s: (Top) Vinny Appice, Tony Iommi; (Bottom) Geezer Butler, Ronnie James Dio.
With all due admiration and respect for the guitarists, bassists, drummers, keyboardists, and theremin players out there, it’s not for no reason that the lead vocalist is called the “front man” of a band. From their position at center stage, it’s usually the warbler who must engage and energize a live crowd, is a lineup’s most recognizable face, and often the only member a casual fan knows by name.

So when Black Sabbath fired Ozzy Osbourne in 1979 for excessive drinking and drugging (that in itself an accomplishment, given the gargantuan-but-still-less proclivities of guitarist Tony Iommi, bassist Geezer Butler, and drummer Bill Ward), the blokes from Birmingham were in a bit of a pickle. 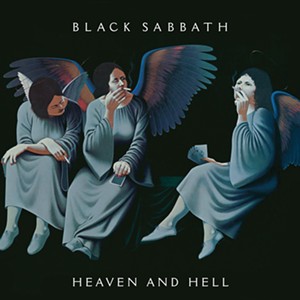 Rhino Records cover
Enter one Ronnie James Dio. Fresh off a stint with Rainbow, a chance encounter with Iommi at a party led to him assuming not only singing duties, but all of the lyric writing as well for their next two records—the second with Vinny Appice replacing Ward on the skins.

Both were enthusiastically received by fans, the band got a much needed jolt, and the albums’ respective title tracks along with “Voodoo,” “Die Young,” “Neon Knights,” “Children of the Sea,” “The Sign of the Southern Cross,” and “Turn Up the Night” entered the Black Sabbath canon.

Now, Rhino Records is releasing expanded editions of both Heaven and Hell and Mob Rules with the original albums remastered in a variety of formats. And—manna for fans—generously stuffed with extras including B-sides, alternate takes, and live recordings, including a full concert from the era. It also includes the much-cherished version of “Mob Rules” recorded for the soundtrack to the animated movie Heavy Metal, the most brutal and slashing take the band ever did on the song.

And while Ronnie James Dio passed away in 2010 from stomach cancer (he received treatment at Houston’s MD Anderson Cancer Center), his widow Wendy has overseen or championed many related projects, and couldn’t be happier with the reissues.

“I think it’s great for both the longtime fans to get the live stuff, and for the kids who really haven’t had a chance to listen to them. We’re all very excited,” Wendy Dio says from her home. “There were like two Black Sabbaths. Ozzy was an innovator and a great showman, and when Ronnie came into the band, it became a different group with a new audience. I wouldn’t say one was better than the other, but Ronnie was more melodic with his writing. And it was such a tight band.” Wendy Dio today.
Photo by PG Brunelli/Courtesy of Chipster PR
While both Heaven and Hell and Mob Rules continued the band’s previously-established themes of demons and netherworlds, Dio added songs of royalty and knights, witches and dragons, and mystical fantasy along with some deeper social commentary. And the tempos became faster and more slashing, some of that reflecting his own knowledge of musical instruments which he played.

Strictly as a listener, Wendy Dio picks out the best-known lyric from the song “Heaven and Hell” as a favorite: “The world is full of kings and queens/Who blind your eyes and steal your dreams/It’s heaven and hell, oh well.”

“There’s so much you can read into it, but Ronnie would write so listeners could also decipher their own meaning of what the songs were about. So many of those songs are special to me.”

For longtime Sabbath fans, it’s the inclusion on both records of live material from 1980-82 that will be the highlights of the releases. That’s because 1982’s Live Evil—the only official release from the Dio-Iommi-Butler-Appice lineup—didn’t live up to expectation. And Rock Lore notes Dio and Iommi would each helm competing and contradicting mixing sessions, with one erasing or altering the work of the other.

Most of the live material comes from the two Dio-helmed records, but also feature his versions of Ozzy-era songs like “War Pigs,” “N.I.B.” and “Iron Man”—the last of which was the source of some intermarital ribbing among the Dios.

“I always remember him singing that and sort of [stomping] up and down the stage, and I used to laugh at him about that!” Wendy chuckles. “But he’d always try and make the live performances different from the recordings, sometimes making it faster. And they all played so well together, and pushed each other forward.”


That conflict over Live Evil is one reason Dio quit Black Sabbath to embark on a hugely successful solo career with his own band, though the quartet would reunite several more times: For 1992’s studio album Dehumanizer; to record new material for a 2007 compilation CD, and—against all odds—reunite under the name Heaven & Hell right after for both touring and another new record, The Devil You Know, and live DVD.

They purposely did not use the name “Black Sabbath.” It not only freed them from doing Ozzy-era material, but helped avoid a probable legal wrath (and writs) from Ozzy and manager/wife Sharon Osbourne. When the band was inducted into the Rock and Roll Hall of Fame in 2006, it only included the original four members, which angered many fans (a similar situation occurred with the induction of KISS). 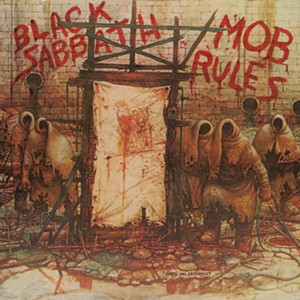 Rhino Records cover
Right up until the end, Ronnie James Dio continued to make a real connection to his audience. “Ronnie cared about his fans and they meant so much to him,” Wendy says. “He’d spend hours and hours signing autographs after the shows. He never wanted to forget where he came from.”

Wendy also helms the Ronnie James Dio Stand Up and Shout Cancer Fund, whose goal is to “support cancer prevention research, raise awareness and educate the public with the focus that early detection and prevention saves lives.” The pandemic has put a temporary halt to the Fund’s two biggest fundraisers, “Bowl for Ronnie” and “Ride for Ronnie.”

But 2022 will see a number of other Dio-related projects, including the long-awaited July 27 publication of his autobiography, Rainbow in the Dark. Titled after his biggest solo hit, Ronnie himself wrote a chunk of it, later completed by Wendy and noted hard rock journalist Mick Wall.

“After he died, I couldn’t think about it or look at it. But now the time is right for it to come out,” Wendy says. There’s also a graphic novel with an original story based on the cover of Dio’s Holy Diver record drops on June 17 from Z2 Comics. Wendy is also working on a musician Walk of Fame along Sunset Blvd. in Los Angeles, and even a Dio Museum.

Finally, there’s the unexpected reappearance of the song “Mob Rules” last month in an unlikely format. Some inventive folks posted videos to YouTube and social media with song providing an apt soundtrack to footage of the Capitol Hill riots of January 6. When asked if she’s seen any of them, Wendy Dio lets out a delighted laugh.

“No! That’s amazing! And funny! Ronnie was way ahead of his time! And as he said, ‘if you listen to fools…the mob rules!’”
California Privacy Policy California Collection Notice
Do Not Sell My Info
Use of this website constitutes acceptance of our terms of use, our cookies policy, and our privacy policy The Houston Press may earn a portion of sales from products & services purchased through links on our site from our affiliate partners. ©2022 Houston Press, LP. All rights reserved.