Three Teams Reportedly In Lead for J.J. Watt's Next Stop 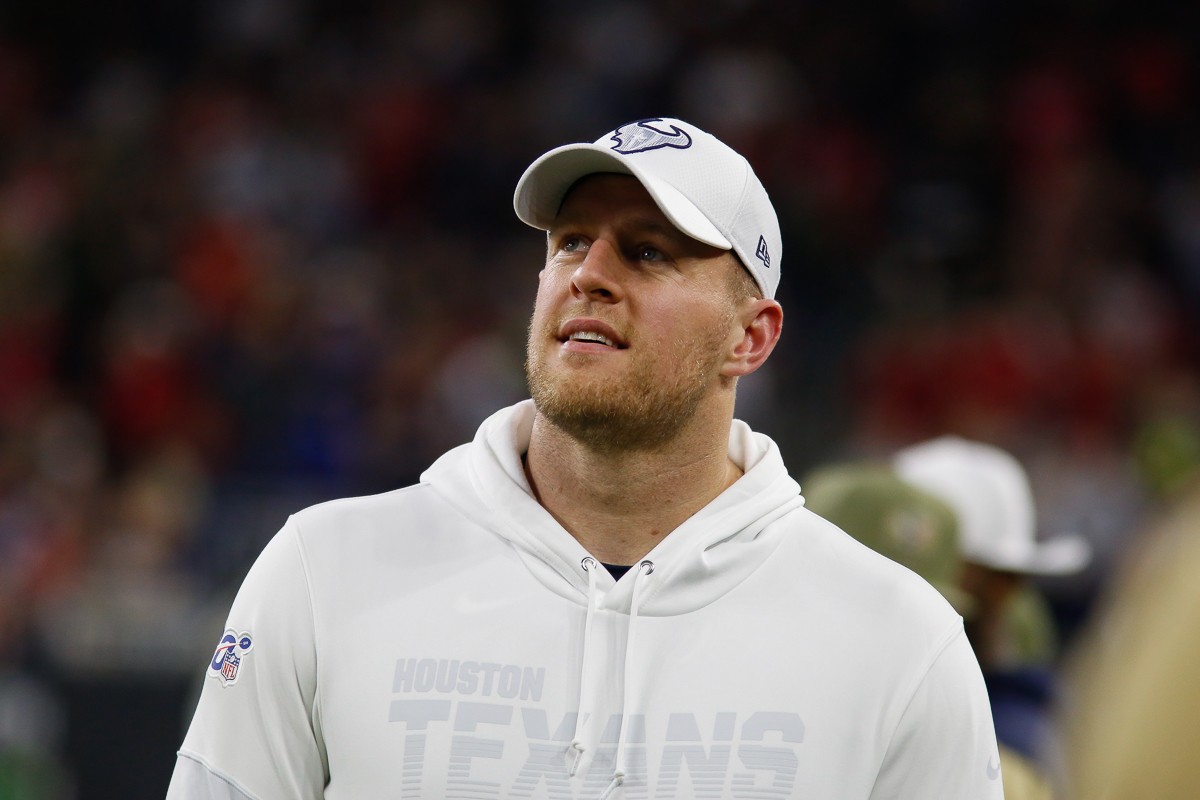 Photo by Eric Sauseda
Reports are emerging of J.J. Watt's market for a new employer developing.
Right now, J.J. Watt is in a pretty enviable position, and I'm not just talking about the mere fact that he has managed to escape the cesspool of dysfunction that is the Houston Texans behind the scenes. That, unto itself, probably has his 50-plus former teammates quite jealous. What I'm referring to is the fact that the Texans' noble decision to release him from his contract — good job, Cal — puts Watt into a dynamic where he is one of the sole free agents out there on the market right now.

The traditional style free agents, the ones whose contract merely expires (as opposed to Watt's contract which was voluntarily terminated early by his team), hit the market in the middle of March. So whatever cap space Watt suitors may have, he is theoretically the only player they're likely pursing with that cap space for now. In other words, there's very little competition in the marketplace. Also, Watt is actually able to talk to these teams, unlike the traditional free agents, who are technically still under contract to their employers through mid-March.

So, until Watt signs somewhere, we will hear stories of certain teams "taking the lead" in the Watt market, or stories of Watt himself narrowing the field. The latest comes from a longtime, prominent national NFL reporter, John Clayton, who went on 93.7 The Fan in Pittsburgh earlier this week, and cited three favorites and a dark horse for Watt:


.@JohnClaytonNFL says JJ Watt won't be coming to Pittsburgh. Tennessee, Green Bay, and Buffalo are the 3 teams. Raiders as a dark horse.

For context on how confidently Clayton stated his report, here is the actual audio:

So it sounds more conversational between Clayton and the hosts, and less emphatically "report-like" as Andrew Filliponi's tweet suggests. That said, let's do what we will likely be doing with all reports about Watt's next chapter — let's examine the likelihood, and the ease (or difficulty) with which we can root for Watt at that next stop:

TENNESSEE TITANS
This would be the ultimate gut punch for Texans fans, Watt going to a division rival that actually USED TO BE Houston's professional football team. First the Oilers, then Watt? Please God, no. There is a connection there with Mike Vrabel as head coach, as he was the DC here in 2017. In the end, I choose to believe Watt won't plunge the dagger in our hearts like that.
LIKELIHOOD:(1 to 10): 2.2
ROOT-ABILITY (1 to 10): -12.4

GREEN BAY PACKERS
This is the easiest non-Texans rooting scenario to get behind. An NFC team, a heritage franchise, and the team Watt grew up rooting for. The only issue here may be money, where Green Bay is several million dollars over the salary cap, and has other players they need to re-sign.
LIKELIHOOD:(1 to 10): 3.1
ROOT-ABILITY (1 to 10): 9.6

BUFFALO BILLS
When you factor in the ability to pay Watt, i.e. where the team is versus the salary cap, with the capability of making the Super Bowl, I think Buffalo might be emerging as the favorite to land Watt's services. The Bills are slightly over the cap, but by a very workable amount. Also, Buffalo's relationship with its fans and city is the closest thing to what Watt grew up rooting for with the Packers.
LIKELIHOOD:(1 to 10): 3.9
ROOT-ABILITY (1 to 10): 9.6

LAS VEGAS RAIDERS
Unless Watt has a gambling problem we are unaware of, or he is hellbent on easy access to Celine Dion shows, I don't see this one happening.
LIKELIHOOD:(1 to 10): 0.6
ROOT-ABILITY (1 to 10): 4.5

One last add, from Dianna Russini of ESPN, on the overall J.J. Watt market:

JJ Watt has received several offers from teams. The best offer he has received right now is between 15-16 million per year, per sources.