Gov. Greg Abbott visited Houston on Monday to tout new legislation proposed by his Republican allies that he claimed would protect the integrity of Texas elections. But his Democratic rival Harris County Judge Lina Hidalgo contends that the slate of electoral reforms state conservatives are clamoring about is nothing more than good old fashioned voter suppression, inspired by former President Donald Trump’s ongoing, evidence-free insistence that voter fraud cost him his reelection.

Speaking alongside Republicans state Rep. Briscoe Cain of Deer Park and state Sen. Paul Bettencourt of Houston, Abbott swore that all the GOP wants to do is protect elections from voter fraud. “Our objective is very simple, and that is to ensure that every eligible voter gets to vote. It’s also to ensure that only eligible votes are the ones that count at the ballot box,” Abbott said.

The highest-profile election “integrity” bill filed in recent days was Senate Bill 7, which was written by East Texas Republican state Sen. Bryan Hughes and is co-sponsored by Bettencourt. Among other changes, SB7 would most notably ban drive-thru voting, require all early voting locations to close at 7 p.m. and would force disabled Texans to provide proof from a doctor to be able to vote by mail.

It would also bar local governments from sending out unsolicited applications for mail-in ballots, an inclusion that’s clearly inspired by then- Harris County Clerk Chris Hollins’ plan to send all county residents absentee ballot request forms before he was eventually blocked from doing so by the Texas Supreme Court.

Abbott and his allies argued that all of these ways that state Democrats tried to make voting easier during the pandemic would also make it easier to carry out voter fraud in the future, although there's no evidence that any of these changes led to any documented cases of fraud in 2020.

“What we’ve seen in the past is that election fraud takes place. I have no doubt that it took place here in the state of Texas,” Abbott said Monday, although he did admit that “Right now, I don’t know how many, or if any, elections in the state of Texas in 2020 were altered because of voter fraud.”

Harris County Judge Lina Hidalgo called proposed state election law changes a brand-new poll tax.
Screenshot
Hidalgo believes it’s clear that these changes are targeted at Harris County. She thinks it’s obvious that outlawing changes the county implemented for the 2020 election — such as extending early voting hours to 10 p.m. for three days, including one day of 24-hour early voting to accommodate workers who couldn't afford to take time off and creating drive-thru voting opportunities — are transparent attempts to limit turnout in her high-population, increasingly Democratic-leaning county.

She even called the requirement for disabled Texans to provide proof of their disability “a poll tax disguised as election integrity.” It’s a policy she said would be especially cruel in Texas, where around five million residents don’t have health insurance, because those uninsured Texans with disabilities would have to fork over even more money to see a doctor to get the required proof.

“That’s as many people as the state of Colorado that are uninsured, and you’re telling me that these folks have to go pay for a doctor’s note to prove they have a disability simply to be able to vote? That’s a poll tax,” Hidalgo said. 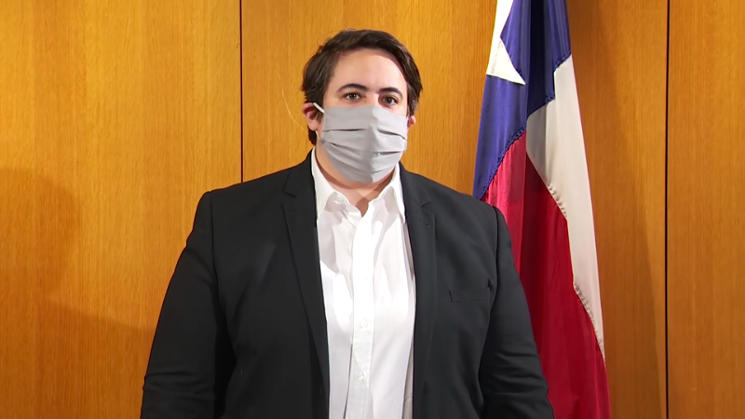 Harris County Elections Administrator Isabel Longoria was particularly infuriated by the Republicans’ attempt to ban drive-thru voting, which she argued may be motivated by how the service was used by a large number of Black and Hispanic residents that tend to lean Democratic.

“I’ll go a step further and say that with drive-thru voting, for example, that 45 percent of the population in Harris County is Black and Hispanic, [and] 54 percent of drive-thru voters were Black and Hispanic folks and other minorities,” Longoria explained. “So you’ve got to start asking yourself, what’s the intent of this bill? To change the rules for some sore losers, or to do something else?

Hidalgo said that these so-called reforms “are a continuation of policies we’ve seen in this state since Reconstruction” to make it tougher to vote for minorities and anyone else that our state’s Republican leaders believe will vote Democratic and threaten the GOP’s control of all levers of Texas’ government.

She’s also convinced that none of these changes to state election law would have been proposed if Trump hadn’t lost the presidential election and then used his influence to get Republicans like Abbott, Cain and Bettencourt to root out so-called voter fraud.

“One of these legislators was part of the legal team, Donald Trump’s legal team, trying to overturn the election,” she continued, referencing Cain’s trip to Pennsylvania after the November election to help the Trump campaign investigate alleged fraud.

“We’re in a critical juncture in our fight against the pandemic. We’re still recovering from the cold weather, the outages, the failed policies that led people to freeze to death just a few weeks back,” Hidalgo said. “Elected officials should earn the vote of voters through good policy, through good work, and shouldn’t hope to win by keeping voters from participating.”
California Privacy Policy California Collection Notice
Do Not Sell My Info
Use of this website constitutes acceptance of our terms of use, our cookies policy, and our privacy policy The Houston Press may earn a portion of sales from products & services purchased through links on our site from our affiliate partners. ©2022 Houston Press, LP. All rights reserved.