1974: The Year that Movies, Music, TV, and Politics All Came Together 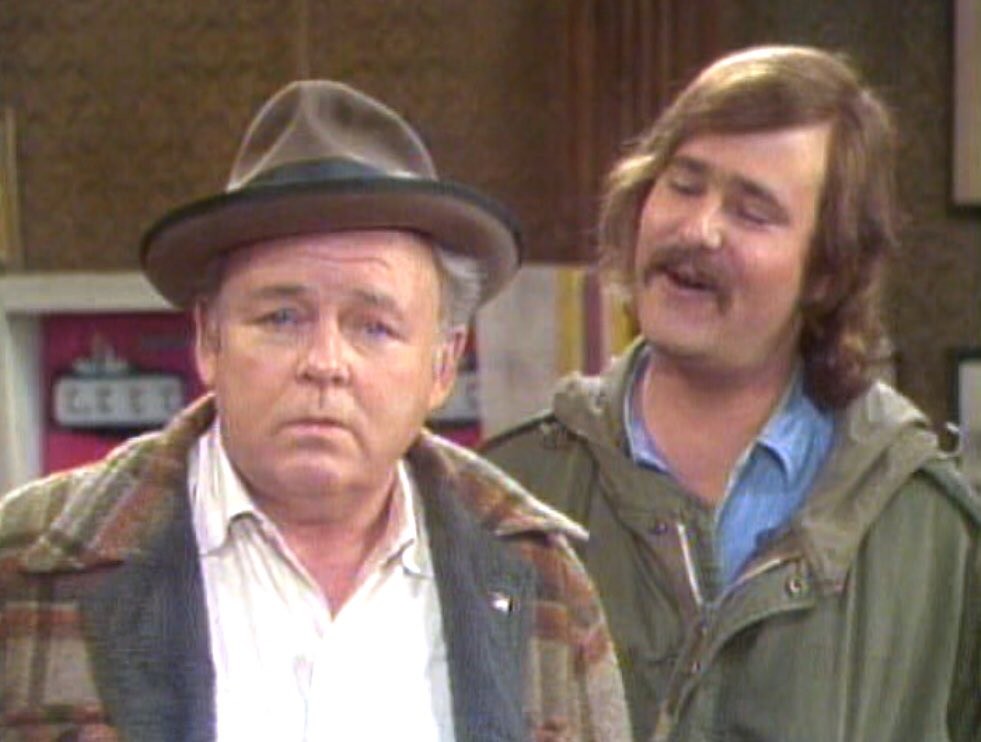 Screen Grab/CBS TV
"All in the Family" was perhaps TV's most groundbreaking show in the way it dealt with social and political issues and conflict between the generations.
Ronald Brownstein has spent most of his life as a professional reporter in Washington, D.C., and today is a frequent political analyst for CNN and a senior editor at The Atlantic. But he also holds a deep interest in pop culture and—more importantly—how it relates to and connects with history and society.

He brings together a confluence of media, time, and place in his latest book, Rock Me On the Water: 1974—The Year Los Angeles Transformed Movies, Music, Television, and Politics (448 pp., $29.99, Harper). 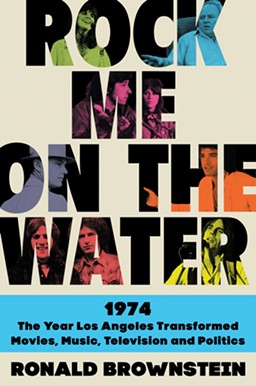 Book cover
Brownstein was familiar with some of the topic, having lived in Los Angeles in the ‘80s/early ‘90s, and written The Power and the Glitter about the historical connections between Hollywood and politics. But it was while covering a pre-presidential run political event for Elizabeth Warren at the home of TV producer Norman Lear during a time that he’d been listening to a lot of L.A. based-music that this book crystallized itself in Brownstein’s mind.

“That’s when all the cherries lined up in the slot machine for me,” Ronald Brownstein says. “1974 was really the culmination of something that had started earlier and built. It’s where the critiques of America were [reflected] in the broader pop culture.”

Brownstein notes that at the time a lot of groundbreaking and socially relevant entertainment was happening. All in the Family, M*A*S*H, and The Mary Tyler Moore Show were all on the same CBS Saturday night lineup. You had career-defining albums from Linda Ronstadt, Jackson Browne, Joni Mitchell, and the Eagles coming out. And films like Godfather II, Chinatown, Nashville, and Shampoo were on screen or being made. Then Jerry Brown’s election as Governor of California brought some of those risk-taking ideas into the political system.

On television, Lear’s All in the Family was unlike any show before or since in its frank (but usually funny) depiction of every racial, sexual, religious, and political taboo out there. In fact, some of the episodes and dialogue are still shocking in 2021 in an “I can’t believe they got away with that!” or “That would never be on TV today!” way.

“Isn’t that interesting?” Brownstein laughs. “That first episode comes at you like a rock through the screen. CBS was afraid of losing their audience. They gave us Gomer Pyle U.S.M.C. and Beverly Hillbillies and Petticoat Junction. CBS President Robert Wood – who is a very unlikely revolutionary – was a very conservative guy. But he recognized the pressure from the business staff that they had to get younger, more urban, and more contemporary. And even then, he was ambivalent.”

As Rock Me On the Water relates, CBS executive and show producer Norman Lear fought over which episode would serve as the All in the Family broadcast premier in 1971: the incendiary pilot, or a tamer later episode. Even to practically the hour before, Lear didn’t know which version of the Bunker family that America would be introduced to in their living rooms. In the end, Lear’s vision prevailed.

“The CBS eye had blinked,” Brownstein says. “And TV was never the same again.” 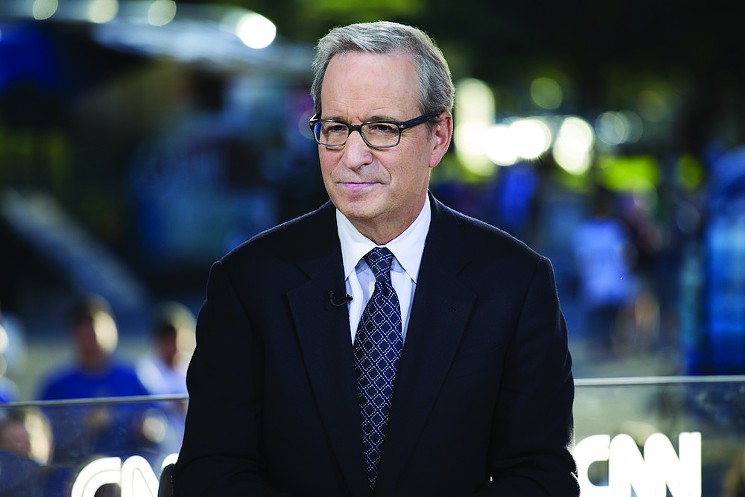 Author Ronald Brownstein in the CNN studios.
Photo by Eileen McMenamin/Courtesy of Harper Books
In the area of music, Brownstein details a community of singers, songwriters, producers, and musicians all scuffling to make it by with demos and open mike nights at the Troubadour Club while crossing paths personally, professionally, and sexually. Still, he notes there was more of a spirit of collaboration that competitiveness.

“The artists are hanging out with each other, but also the producers and executives and managers. The one word people kept coming back to me with was openness. L.A. was open to experimentation and cross-fertilization at that point,” he says. The music became more introspective and laid-back, awash in golden harmonies, marijuana and tequila, and blue jeans. But when the West Coast sound broke big (and filled formerly empty bank accounts), the coziness of the scene changed.

“As they become bigger, that close [camaraderie] dissipates and you lament the loss. Linda Ronstadt talked to me about that. If you went to see your buddies play, it was at the Forum or some giant arena and not the Troubadour. And it’s not the same,” he says.


Rock Me on the Water features scores of other profiles, topics, and anecdotes. That includes fascinating chapters on the political activism and journey of couple Jane Fonda and Tom Hayden, and the extreme out-there life of movie/music producer Bert Schneider, who Brownstein dubs “The Icarus of Los Angeles.” He was co-founder of a production company behind the man behind so many groundbreaking movies of the time, several with Jack Nicholson (Easy Rider, Five Easy Pieces) and The Last Picture Show.

Brownstein interviewed a lot of the people he writes about for the book, getting almost everyone he wanted to speak with him. That includes Jackson Browne, whose song from his 1972 debut album records provides not only the book’s title, but something of a guiding light that Brownstein gladly followed, with a glance to the promises of the past.

“That was my title very early on. It was originally my idea it conveyed that openness. The songs sounds like somebody driving down the Santa Monica Freeway down the California incline with a surfboard sticking out of the back,” he says. “This idea of L.A. in the early ‘70s as this creative place like Paris was for writers in the ‘20s and New York for modern artists in the ‘50s. That kind of confluence of world class historical talent operating on all cylinders, and just blocks from each other.”


In the book, Brownstein writes of the song “It shows how strongly [Browne] still believes that collective action can avert disaster and create a more just world.” On the phone, he amplifies the song and its meaning.

“It began a deeper resonance for me. It’s one of [Browne’s] songs that grapple with what I think was the core [tenet] of pop culture in the early ‘70s: What from the ‘60s, what from the idealism and hopes of change could actually be sustained. And in that song, Jackson is still at his most optimistic. On his next album, the song ‘For Everyman’ is a bit more ambivalent. And by the third album in 1974 with ‘Before the Deluge,’ he had mostly given up hope.”

By 1975, it was telling that the nostalgic feel-good blandness of Happy Days would replace All in the Family as TV’s No. 1 show. The release of Jaws kickstarted Hollywood’s love affair with big spectacle “blockbuster” films that continued with Star Wars. And the sounds of punk, new wave, heavy metal, and disco challenged everything about the music of the “Avocado Mafia” in L.A.

But as Brownstein says, the door was already open, and advances were here to stay in political, racial, sexual, and social issues. Maybe not what the promise of the late ‘60s/early had hoped for (and it’s a journey that still continues today), but there was no going back.

“My story is about stuff coming together and a wave building in all these industries, a sense of momentum and creativity being unleashed,” Brownstein sums up. “And it all fed off each other not just within the industries, but between them. They all had the same tail wind.”
California Privacy Policy California Collection Notice
Do Not Sell My Info
Use of this website constitutes acceptance of our terms of use, our cookies policy, and our privacy policy The Houston Press may earn a portion of sales from products & services purchased through links on our site from our affiliate partners. ©2022 Houston Press, LP. All rights reserved.